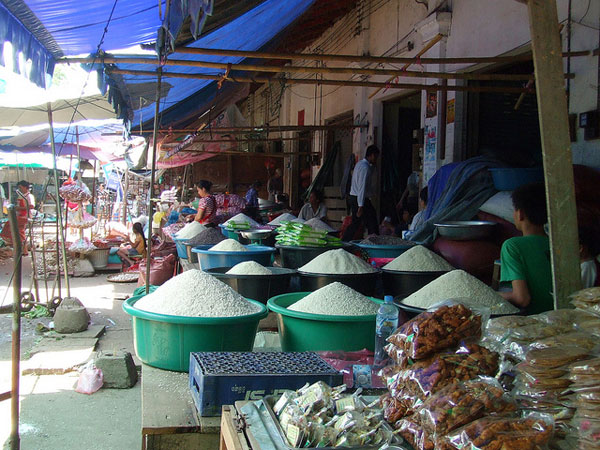 Three major cereal price spikes hit world markets in the past few years, one in 2007-08, another in 2010-11, and the third in 2012. However, analysis in this article will focus on the first two price increases because more data are available for these two. During the first, world prices increased substantially for all three of the world’s major cereals—rice, wheat, and maize. Prices for wheat and maize increased during the second although those for rice were stable. But, how much impact do these events on world markets have on food security and poverty?

Farmers and consumers do not interact with world markets directly— what they really care about is how prices move in their local market. An increase in domestic prices can hurt poor consumers. This reduces their purchasing power and impairs their nutritional status. A drop in prices can do the same to poor farmers, or at least those with a surplus to sell. And, frequent fluctuations in prices (price volatility) can hurt both farmers and consumers, can discourage investment, can encourage distress sales of assets, and may lead to political instability.

So, how much did prices in local markets increase during the past two world price spikes? A price index using data from 50 countries around the globe showed that domestic rice prices increased much less in 2008, the peak of the crisis, than world prices (Fig. 1). From a market point of view, it is clear that only a fraction of the movements in world prices is passed through to domestic markets. Similar patterns hold for wheat and maize as well.

Nevertheless, Figure 2 shows that changes in domestic prices track events on world markets reasonably well, only that transmission is partial. (Note that the domestic rice price index is the same in both Figures 1 and 2; only the axis scale is different.) The domestic price indices for rice, wheat, and maize increased sharply in the second half of 2007 and the first half of 2008, just as world prices did—only proportionately less. In the second half, domestic prices also fell sharply, again mirroring the pattern in world prices. Finally, in the second half of 2010, domestic wheat and maize prices increased sharply while rice prices were stable. Again, the pattern is similar to that on world markets. It seems that, for many countries, domestic markets are connected to world markets.

Furthermore, even the fact that only a fraction of world price movements is actually transmitted to domestic markets does not mean that price fluctuations on world markets are irrelevant to the poor. Indeed, price increases on domestic markets for rice, wheat, and maize were substantial from a poverty and food security point of view. Prices typically reached a peak in early 2008 that was 40% higher than in January 2007, even after adjusting for inflation (Fig. 2). These peak prices were not sustained for an entire year, but domestic prices over the course of 2008 were still 25% higher than in 2007 for rice (again, after adjusting for inflation).

In many Asian countries, the poor often spend as much as 30% of their income on rice alone. Thus, a 25% price increase would lead to an approximate decline in real income by 7.5% for those who do not produce any rice (which includes all of the urban poor and many rural poor). This is a substantial shock for low-income families. This means that either they will reduce expenditures on rice or, if these are maintained, they will have less to spend on health care and education, or they will scrimp on other nutritious foods such as meat, dairy products, fruits, and vegetables. Unfortunately, these short-term coping strategies can permanently affect a person’s physical health and mental capacity, especially if this leads to malnutrition in the first 1,000 days of life.

Figure 2 also shows that domestic staple food prices declined in 2009, thus providing relief to consumers. Nevertheless, by the end of 2011, prices were higher than they were before the 2007-08 crisis by 10% to 20%. (It is difficult to provide more current updates due to a lack of availability of underlying data.) These higher prices harm consumers and, in most cases, increase poverty in the short run. But, if the higher prices serve to mobilize domestic political support for long-term investment in agriculture, productivity can be increased. Eventually, this will contribute to economic growth and poverty alleviation in the longer term. Thus, even if price transmission from world markets to domestic markets is often imperfect, sharp movements in world prices do get transmitted to domestic markets in many cases. The resulting increase in domestic prices is often substantial from a food security and poverty point of view—even if incomplete from a markets and trade point of view.

Dr. Dawe is a senior economist in the Agricultural Development Economics Division, Regional Office for Asia and the Pacific, of the Food and Agriculture Organization of the United Nations, Bangkok, Thailand.