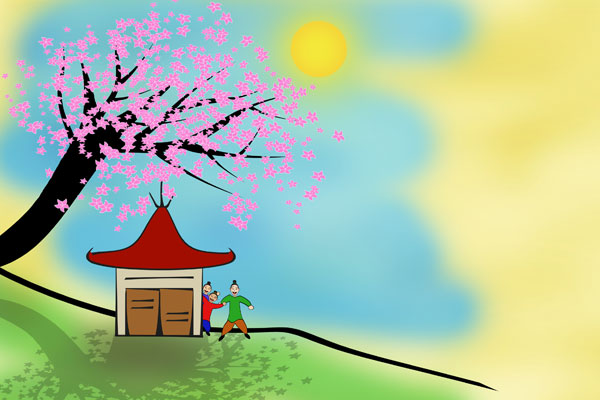 In Asia, many people eat rice three times a day. For them, rice is life; but, in this Japanese fable, a “holy man” seems to have given up eating rice.

Many years ago in Japan, ascetic monks abounded. They were highly revered and respected. They became models for everyone to look up to and emulate.

These monks deprived themselves in various ways. Some gave up sleeping on mats, preferring hard stones instead. Others walked barefoot many miles to inspire others to shun physical comfort.

One monk even gave up eating rice. Throughout the land, people were amazed when they heard of his abstinence for they could not imagine life without eating rice.

“Everyone eats rice three times a day, and for snacks as well,” the people marveled. “How can he live without rice?”

When they learned that the monk ate pine needles instead of rice, they were even more amazed. They could only presume that he was very dedicated to be able to do such a thing.

Over time, he became so well known and revered that the Emperor invited him to live in the imperial garden. So, the monk came and lived in a small bamboo house in the Emperor’s garden. Every day, he sat cross-legged on his mat, meditating for hours and hours at a time. The Emperor found him to be extremely devout.

”Who else could sit cross-legged so long, and who else could live without rice, eating only pine needles?” the Emperor wondered. “He must truly be a saint.” However, a few of the young attendants in the Emperor’s court were not so sure about this monk that everyone talked about. They all agreed that he seemed impressive, and they treated him with the respect the Emperor demanded. But, they found it hard to believe that he ate no rice.

One day, they decided to visit the monk.

“My good holy man, how many years has it been since you last ate rice?” they asked.

“Ah, it was many years ago when I was but a young man,” he said, flattered, in a very worldly way, by their interest. “I’m nearly eighty now.”

As the young lads walked away, their thoughts were occupied with the monk.
“If the monk eats only pine needles and no rice, what can his feces look like?” one of the men wondered. “They must look strange.”

His friends agreed, but dropped the matter quickly.

Several days later, these court attendants were relaxing, sitting round a table drinking. They’d all had a little too much rice wine when one of them suggested, “Let’s check the monk’s outhouse and look at his feces, which must be strange.”

“How can this be?” they asked each other. “Where does he get his rice from?”

They were determined to find out. Quietly, they waited outside the monk’s house until he left for his daily walk. Then, they crept inside. There was little in the tiny house, so there were not many places to look.

They picked up the small mat the monk usually sat on.

Underneath, the earth was soft, not nearly as hard as you would expect if someone sat there day after day. They wondered what they might find, but they didn’t have to dig far before their suspicions were confirmed. They found a sack of rice.

“Aha!” said the young fellows. “Well, well!” They nodded their heads in tipsy agreement and they carefully put back the soil and the mat so nothing looked disturbed. They waited for the monk to return. He was totally surprised and taken aback to find his small house crowded with young men, and all grinning broadly. Then they laughed at him and chanted: “Rice poop saint! Rice poop saint!”

Ms. Flinn-Stilwell is based in Australia. This story is part of her forthcoming book, Rice—a grain with many stories.