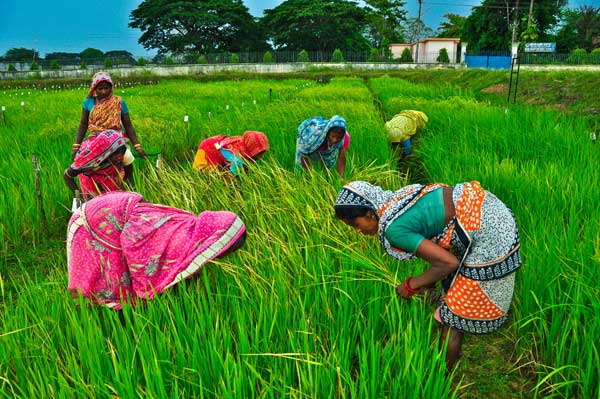 In September 2013, India’s parliament passed the National Food Security Act (NFSA), which, when fully operational, will be the world’s largest subsidized food program. It is a very ambitious program that provides access to subsidized food grains for around two-thirds (810 million) of the country’s population of more than 1.2 billion people—the food being provided solely from Indian cereal and coarse grain (various types of sorghum and millet) production at an estimated annual cost of US$20–22 billion. Over the years, the Indian government has, through its Public Distribution System, provided subsidized food to households living below the poverty line. Now, the NFSA guarantees it.

I believe that one of the most important elements of the NFSA is its potential to empower millions of women as it is based on a life-cycle approach. In addition to a per capita monthly food grain quota, it entails providing further highly subsidized rations for pregnant and nursing mothers from the poor segments of society. They can obtain food and a guaranteed minimum of 1,000 rupees ($16) per month for 6 months—3 months before and 3 months after their child is born. During this period, it is difficult for women to go out and do hard labor to earn their daily wage. Furthermore, under the NFSA, women are designated as “head of household” on ration cards, which enhances their status in the family.

The next stages, through Integrated Child Development Services, cater to children between the ages of 6 months and 3 years, and then 3 and 6 years. Before the NFSA was passed, these programs already existed in various forms, which provided (1) special centers where mothers on their way to work could leave their young children to receive nutritious meals, and (2) mid-day meals for children from 6 to 14 years old as part of a nationwide school feeding program, which benefits more than 120 million children. Now funded under the NFSA, these programs are guaranteed for the first time.

For the last quarter century, India has usually produced more than enough rice, wheat, and coarse grains to feed its people. The challenge in fulfilling the ambitious requirements of the NFSA is managing the distribution of the food to more than 810 million people, using the huge existing—but sometimes inefficient—network of farmers, buyers, storage facilities, and fair-price shops. A major exercise to reform the system of grain procurement and distribution is currently underway with a mandate through the landmark NFSA to make the system work efficiently.

So, for rice and wheat, respectively, entering the stage in a big way are the International Rice Research Institute (IRRI) as leader of the CGIAR’s Global Rice Science Partnership (GRiSP), the International Maize and Wheat Improvement Center (CIMMYT) as leader of the CGIAR Research Program on Wheat, and associated networks such as the Cereal Systems Initiative for South Asia (CSISA) and Stress-Tolerant Rice for Africa and South Asia (STRASA).

Even more important than increasing cereal production per se is assuring that the cropping systems that are in place are sustainable. Indian farmers, who now must produce their critical harvests with less water and labor, under the looming menace of climate change, have learned how to adapt over the centuries. So, it will be important for CGIAR researchers to tap into farmers’ indigenous knowledge to meet future cereal production goals.

Finally, I want to make it clear that the Indian farmers of the future will undoubtedly not be using all of their land only for food grain production. As incomes increase, we now have almost 250 million Indians in a growing middle class, who are demanding more fruit, vegetable, and dairy and poultry products in their diets. So, since less of our cultivable land will be devoted to growing rice and wheat, it will be critical that CGIAR, through IRRI, CIMMYT, CSISA, and STRASA, work with farmers to increase productivity where cereals continue to be grown— thus enabling the government to meet its NFSA targets.

Dr. Sharma is a member of IRRI’s Board of Trustees, 2011-15, and secretary to the National Advisory Council of the government of India.