Do rice plants have a wild adaptive trait that is counterproductive to aerobic cropping systems? 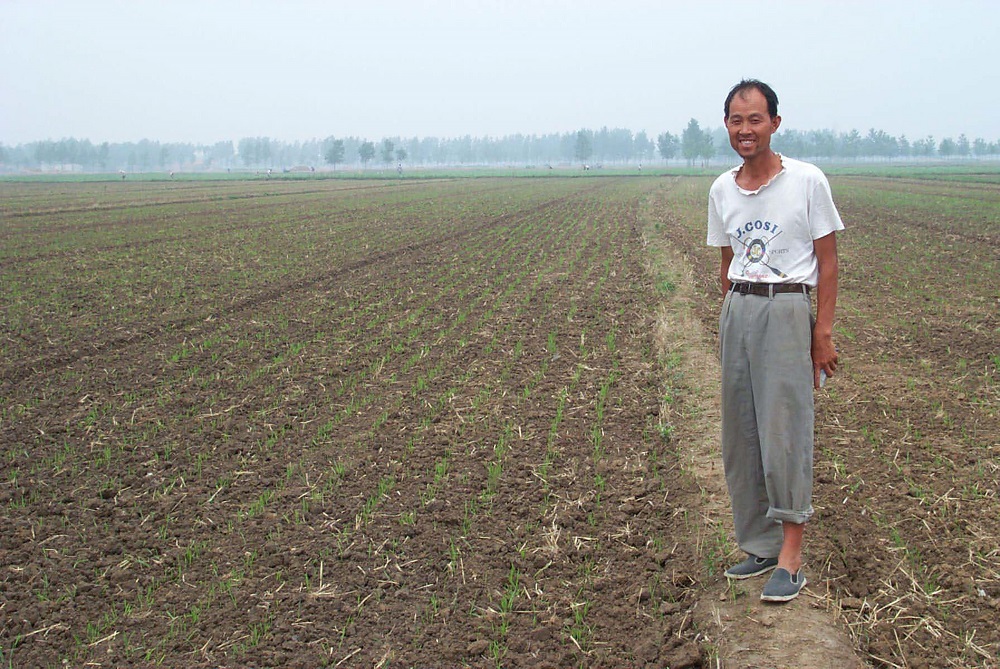 In eastern Asia, the early farmers created a high-performing rice cropping system in which rice seedlings were grown in nurseries and then transplanted in paddy fields covered with shallow water during the entire cropping season.

In fact, the early farmers were mimicking the natural conditions of tropical swamps where this semi-aquatic species that produces highly valued grains originated. Because rice is a semi-aquatic plant, its seeds still need oxygen and cannot germinate in soil covered with a water layer, such as the conditions in a swamp after the first rainfall at the end of the dry season. Eventually, as monsoon rains quickly fill up the swamp, the rice plants continue to grow under water.

This transplanted-flooded cropping system was used for centuries and continues to be the cultivation method to obtain high grain yields. However, because of the increasing human population, it became necessary to grow rice twice or three times a year and expand rice-growing areas by using irrigation water from rivers or underground aquifers. Unfortunately, in many areas, water resources have become scarcer because of other uses or overexploitation. Thus, farmers must use much less water for their rice crop and are unable to maintain their fields under flooded conditions. 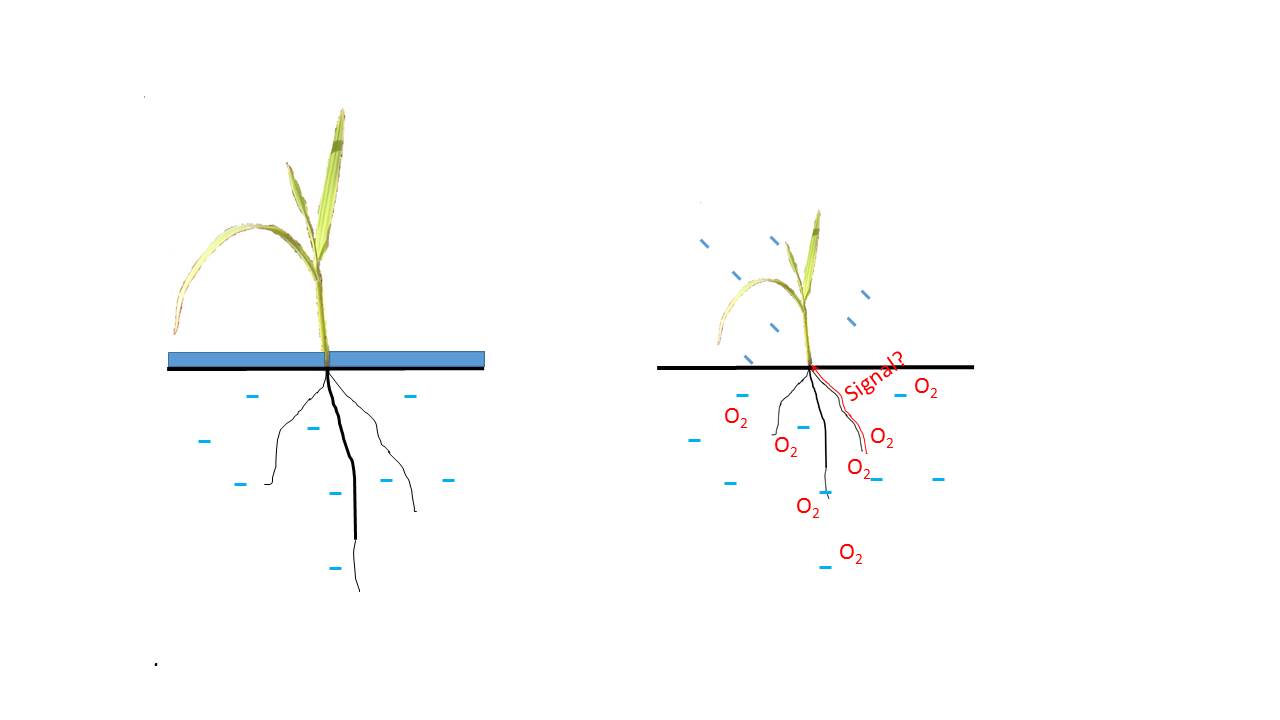 Rice plants (right) grown in aerobic conditions are shorter, flower earlier, and bear smaller panicles than continuously flooded plants. This could be caused by a signal sent by the roots to the shoot organs. (Image by B. Clerget)

Yield reduction in aerobic crops
The lack of a permanent water layer has many negative consequences, particularly for weed control and availability of nutrients. However, even when these two factors are well managed, potential grain yield is often, but not always, lower than in crops grown in constantly flooded fields.

In aerobic cropping systems, where rice is grown like wheat or maize, the crop is regularly irrigated with reduced volumes of water to maintain the soil moisture close to saturation. At these levels, paddy soils are very muddy and contain a lot of extractable water—around one-third of their volume.

Nevertheless, rice plants grown in such aerobic conditions are shorter, flower earlier, and bear smaller panicles than continuously flooded plants, even when grown at a low plant density as in the transplanted crop. To compensate, aerobic crops are sown at higher plant densities and, at flowering time, the shoot biomass of the whole crop is recurrently similar in both environments. Thus, the roots of the more numerous small plants in the aerobic crop can obtain the same quantity of water and nitrogen from the soil and the same quantity of solar radiation from the atmosphere to fix the same quantity of carbon dioxide as the bigger plants in the flooded crop.

Why are plants grown in aerobic fields smaller? One evolutionary hypothesis is that the modern rice plant retains the adaptive response of its wild ancestors to inadequate rainy seasons marked by the presence of air in the soil during the vegetative phase. During such seasons, only the plants that shortened their life cycle and reduced their water consumption were able to produce offspring and maintain the species. Perhaps it is possible to switch off this undesirable reaction once its metabolic pathways have been understood. 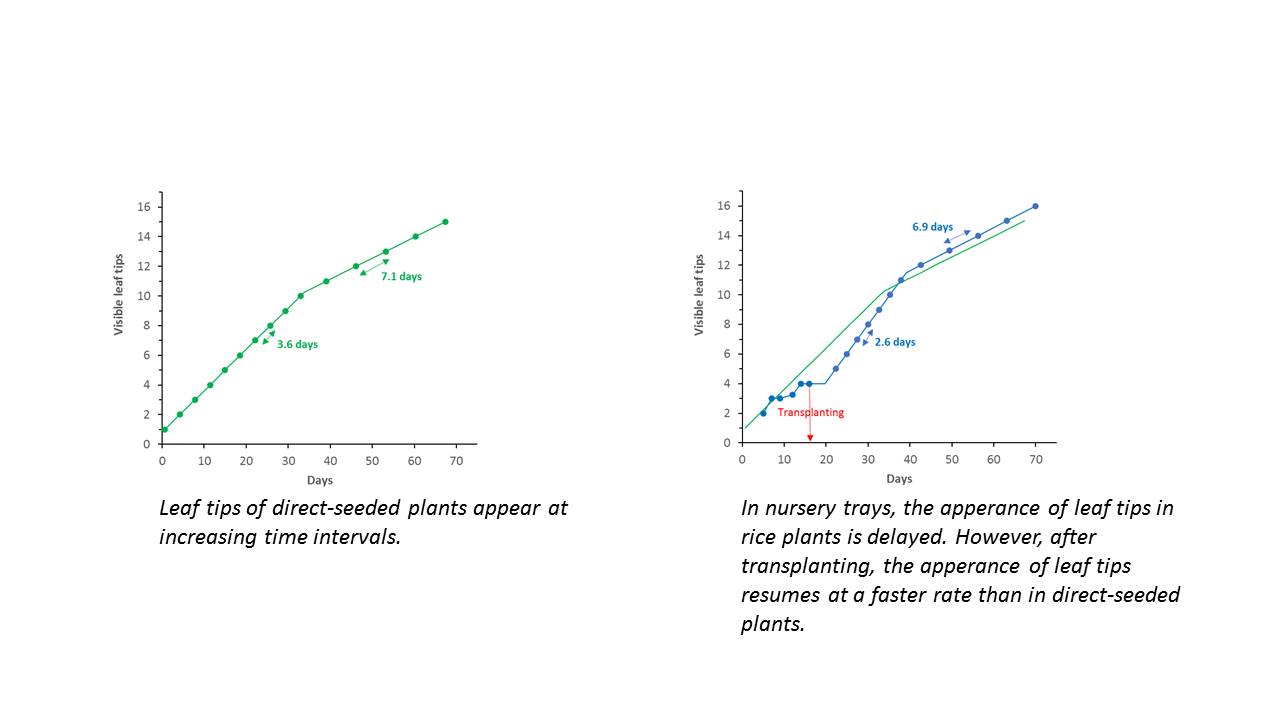 In search of physiological processes
In addition to the smaller size and earlier flowering, our team at the International Rice Research Institute (IRRI) found that aerobic plants developed slower than flooded plants so their leaves appeared more slowly.

In rice, the cells divide in a small apical bud at the upper end of the stem and new leaf primordia (small groups of dividing cells) emerge from the lateral part of the apical bud at a stable rhythm. Cells of the new leaf organize in lines and divide with an exponential kinetics during 3.5 stem apical beats. At this moment, the leaf division zone reaches its maximal number of cells and the more distal cells start elongating while divisions continue for the other cells. This maximal number of cells in the division zone determines the final length of the leaf blade. After four beats, the leaf tip of the new growing leaves emerges from the enclosing sheath of the previous leaf. This four-beat duration from initiation to leaf appearance is stable in rice.

Thus, in aerobic plants, cells in the apical bud divide more slowly and the apical beat is longer than in flooded plants, giving it more time for leaf cells to divide. However, the leaf blades are shorter because there is less and slower cell division in the leaves.

The goal is to find a molecule from the roots that has the property to slow down cell division in the shoot, discover how this molecule is produced in the roots in response to aerobic conditions, and, if feasible, switch off this mechanism.

Dr. Clerget is a crop physiologist at the French Agricultural Research Centre for International Development (CIRAD)-BIOS. He was a seconded scientist at IRRI (2010-2016) where he led a crop physiology team. The author would like to acknowledge Dr. Crisanta Bueno of IRRI and his staff and participating students during his appointment at the institute.