For thousands of Bangladeshi farmers in flood-prone areas, growing rice is a risk they have to take each season. 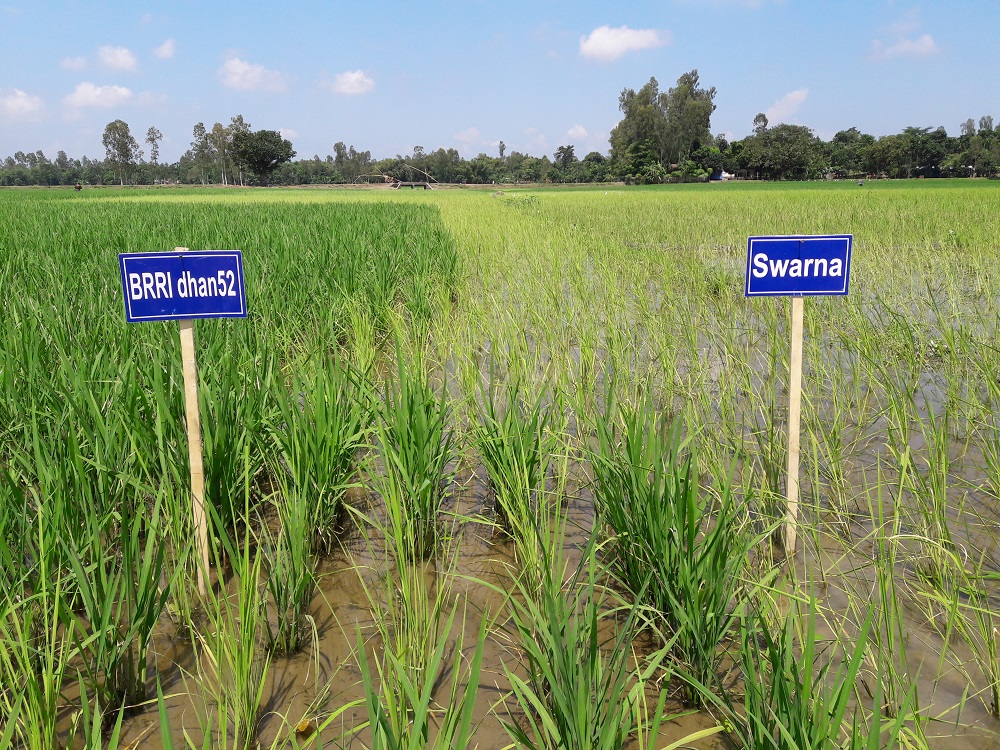 BRRI dhan51 can survive under floodwater for up to two weeks while most rice plants die in a matter of days. (Photo by Md. Ahadat Hossain)

In Bangladesh, water is both celebrated and feared.

Jitendra Nath Sarkar, a 60-year-old farmer in Kurigram District of Rangpur in the northern part of Bangladesh, is all too familiar with the nourishing nature of the rain and rivers—and the frighteningly destructive force of their raging floodwaters.

In August 2017, an unusually harsh monsoon brought the worst floods in 40 years, affecting 41 million people across South Asia. These floods have devastated Bangladesh’s rice sector─ representing the country’s single most important crop. The government estimates that 61,877 hectares of cropland were “completely damaged.” Because most of these farmlands were left submerged, a food shortage looms in the coming months.

A father of two, Mr. Sarkar is the sole breadwinner, making his family totally reliant on the income he earns from his boro or winter crops. Mostly, these consist of boro rice. If the rice crop fails, he will be unable to meet his family’s basic needs. He cultivates around 3 hectares of land and his crops are often damaged by floods that occur almost every year during the aman season. It is a risk that he, along with thousands of farmers living in flood-prone areas, is willing to take each season. The farmers wait in anticipation, hoping the impact of flood will not cut too deeply into their meager income. When the floodwater does arrive, Mr. Sarkar waits for 10 to 15 days for the water to recede to assess the damage to his field. He is often forced to re-plant it, causing him to incur more expenses. The late planting also results in low production.

Mr. Sarkar and the hundreds of thousands of poor farmers like him have little choice but to endure the hardship and helplessly watch their crops and their already meager future wash away.

A history of raging calamities
Almost 20% of the country’s arable land is prone to several floods each year. The scale of some of these floods is simply too large to comprehend. For example, in August 1998, at least 30 million people in Bangladesh were affected by flooding that covered two-thirds of the country.

In Water, water everywhere but… The ‘98 Bangladeshi Floods, Julian Francis, a disaster preparedness delegate for the International Federation of Red Cross and Red Crescent Societies (IFRCS) in Dhaka, documented the human cost brought on by the 1998 flood:

A landless agricultural laborer would, normally, at this time of the year, be earning about 60−70 taka a day transplanting paddy seedling. The floodwaters had put that paddy land ten feet underwater, making this kind of work hard to find. If he owned any animals, he would have to spend his days collecting water hyacinth with which to feed them as the price of cattle fodder has doubled in the last few weeks.

The fruit trees that his wife would normally tend close to their homestead would have been destroyed by the floods. Rather than go in search of the elusive relief supplies of the government and NGOs, many of these people had decided to borrow money even if the “interest” was as much as 8% per month. Many families had already resorted to panic selling of livestock so that the price of meat came down on the Dhaka markets. Forlorn and sodden pointed stacks of rice straw (normally used as animal fodder) stood in the water. It was unlikely that any of this would be of much use except to plough into the soil for the next crop, and, in any case, most of the livestock had been sold or swept away by the floods.

The tragedy that repeats itself
In 2017, an unusually harsh monsoon brought the worst floods in decades—even worse than those in 1998. The floods affected at least 41 million people across South Asia and were the most serious in 40 years, according to the IFRCS.

The floods had a devastating impact on Bangladesh’s rice sector. Almost half of the Bangladeshi farmers’ livelihood is tied directly to agriculture and rice is the country’s single most important crop.

The government estimates that 61,877 hectares of cropland, mostly rice, have been “completely damaged,” while 531 million hectares have been “partially damaged,” according to a report by CNN’s Steve George. Because most of the country’s farmlands were left submerged, food shortage looms in the coming months.

Beyond the staggering statistics are stories of the gritty reality of what it’s like to be caught in the midst of the deluge. Adere Begum, 34, was at home in the village with her two daughters when the floodwaters came. Begum lost many of her ducks, chickens, and cows in the flood, according to the CNN report.

Michael Holtz of The Christian Science Monitor also reported how the impact of the floods could linger long after the waters subsided. By the time the floodwaters began to recede, Sufia and her husband from the countryside of Tangail District, about 50 miles north of Dhaka, saw their rice crop ruined.

“We’ll have to wait two or three months before we can plant rice again,” says Sufia, who uses only one name. In the meantime, she and her husband have taken out a loan to buy food and repair their home. “There’s nothing else we can do.” 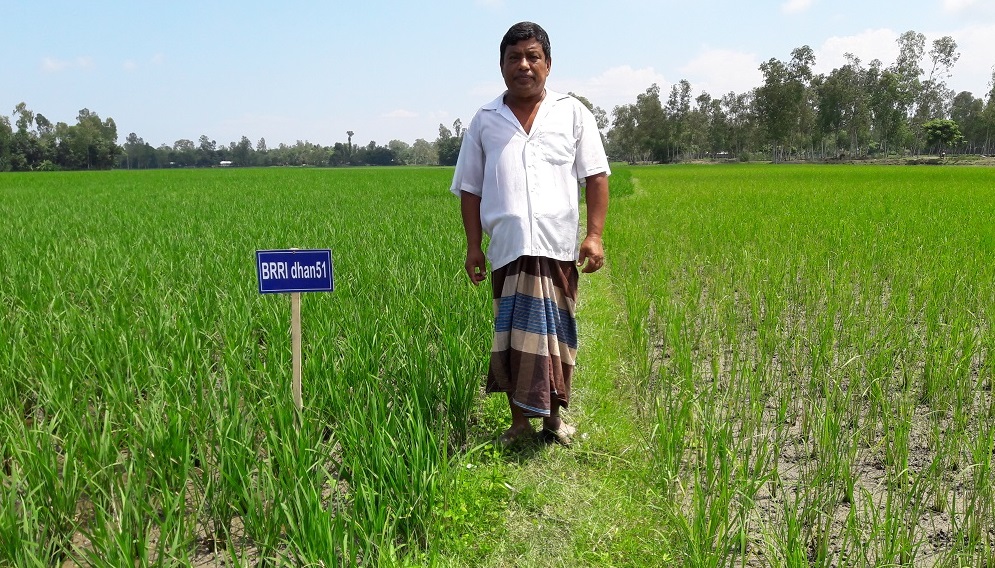 Water recedes, hope emerges
Fortunately, some farmers, such as Mr. Sarkar, have found a way to overcome this debilitating reality. Beginning in 2007, the Bill & Melinda Gates Foundation (BMGF) has been working with the International Rice Research Institute (IRRI) and the Africa Rice Center to ease the effect of floods on the lives of farmers.

IRRI, through the Stress-Tolerant Rice for Africa and South Asia (STRASA) project, works closely with the national government in developing and promoting the use of rice varieties that can withstand environmental pressures, such as flooding, faced by millions of poor farmers. Developed by IRRI in conjunction with its national partners such as the Bangladesh Rice Research Institute (BRRI), these varieties include BRRI dhan51, a variety that can survive under floodwater for up to two weeks while most rice plants die in a matter of days.

During the 2010 aman season, Mr. Sarkar received some BRRI dhan51 seedlings from BRRI in Rangpur. He transplanted these on 250 square meters of his land. He also received training on quality seed production and seed preservation from STRASA.

Soon after, floodwater inundated his entire field for at least two weeks. He thought that, like the previous years, his crops were damaged beyond hope. But, Mr. Sarkar saw his BRRI dhan51 emerging from the rotten remains of his other crops. Within a few days, the flood-tolerant rice plants were growing as if nothing had happened.

A venture pays off
Farmers often perceive new technology as a risk. With no previous experience with a novel crop management method or a rice variety, farmers tend to be cautious. But, Mr. Sarkar’s venture paid off.

“The results were really terrific,” Mr. Sarkar said. “I experienced three- to fivefold increases in my rice yield due to the variety’s ability to survive floods. I planted and harvested it the usual way. It tastes the same as the other rice I have grown.”

He also noted that the variety needs less urea fertilizer. He calls BRRI dhan51 a miracle variety and believes that it changed his life.

“I have more food for my family and have extra rice to sell in the market to bring a little bit more money into the household,” Mr. Sarkar said. Today, his family is doing much better and he has saved enough money for his sons’ education.

A new paradigm in farming
Without knowing it, Mr. Sarkar is also helping others cope with their situation. Other farmers were astonished to see the outstanding performance of BRRI dhan51. His field was proof of its potential to keep farmers afloat during the annual flooding.

“Flood-tolerant rice varieties can help improve the livelihood of other farmers,” he said. “I hope many more will adopt them.”

Farming with nature
It is impossible to control the forces of nature, and the infamous floods of Bangladesh and India are no exception. But, finally, hope is emerging. These flood-tolerant varieties are becoming more popular among the farmers because of their higher yields, with 80% higher survival rate. In addition, these flood-tolerant varieties mature earlier so that they can also provide farmers with opportunities for multiple crops in one year.

About 84% of the 165 million people of Bangladesh are directly or indirectly engaged in a wide range of agricultural activities. Thousands of farmers in most of the districts in the country have been inspired and convinced to cultivate BRRI dhan51. Other flood-tolerant rice varieties, such as BRRI dhan52 and BINA dhan11, were also adopted and planted during the aman season.

The resilience and hope offered by the flood-tolerant varieties give vulnerable farmers a chance to not only survive but also thrive in the face of a changing climate. Scientific innovations, such as BRRI dhan51, BRRI dhan52, and BINA dhan11, will play a vital role in increasing rice production on the floodplains and contribute to the country’s food security.