Today’s challenges facing scientists are greater than they were 50 years ago. Fortunately, available scientific tools and on-farm technologies are far more powerful than ever. 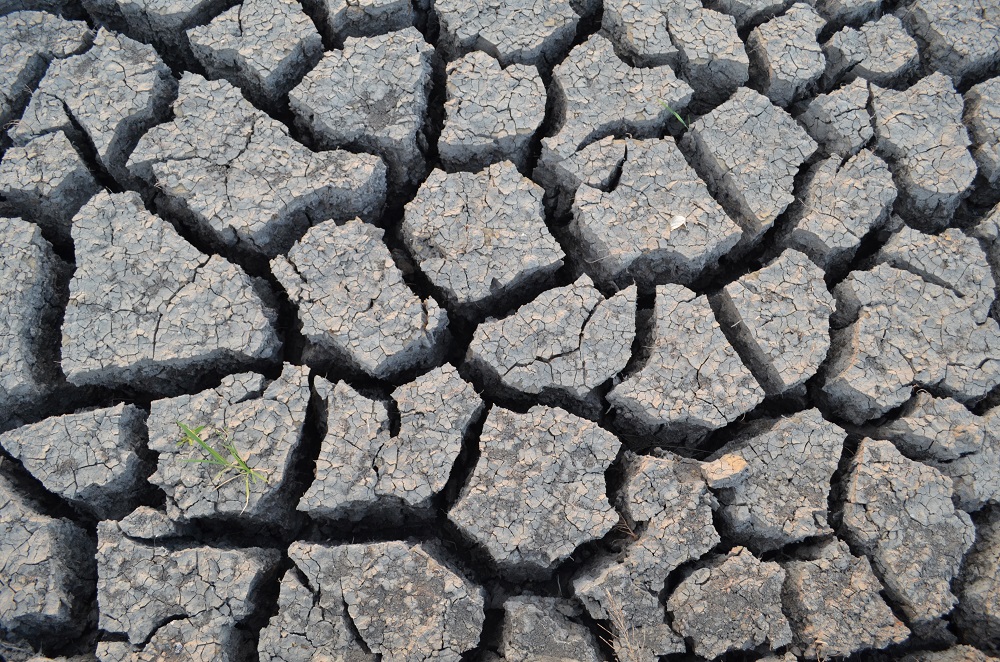 Drought is the most widespread and damaging of all environmental stresses, affecting 23 million hectares of rainfed rice in South and Southeast Asia. In some states in India, severe drought can cause as much as 40% yield loss, amounting to $800 million. (Photo: IRRI)

The impossible balancing act in the face of water scarcity
Freshwater is the fuel that runs the engine of modern society. Without enough fresh water, life as we know it would grind to a halt. Freshwater is also the lifeblood of rice farming in Asia. It is a crucial part of the equation that produces the staple food that feeds both small towns and massive cities. Now, the relationship is under threat.

The amount of freshwater on Earth has remained fairly constant since before the time of the dinosaurs. But, the global population has experienced continuous growth since the end of the Great Famine and the Black Death in 1350. Freshwater—which is less than 1% of the total water on the planet—withdrawn from rivers, lakes, and dams, once used mainly for agriculture, is now being diverted to generate power for industry and cities, sparking a debate on who gets the water and how much of it.

Unfortunately, this tug-of-war will have no winners. Chronic or even sporadic water shortages could derail Asia’s impressive economic growth of the past few decades. But, taking too much water away from rice farms could trigger widespread food shortages. Achieving a balance between water for society and water for rice production will be a key to how Asia’s future unfolds.

Expansion of irrigated agriculture over the past 50 years and the recent urbanization and rapid economic growth of Southeast Asia have dramatically affected water use in the region. Cities demand increasing shares of available water for domestic consumption, industry, and even recreation, at the expense of irrigated agriculture. Asia’s iconic rivers such as the Yangtze, the longest river in Asia, the Yellow River, and the Mekong are increasingly subject to major hydroelectric dam projects as countries scramble to meet their energy needs.

The diversion of river waters is potentially depriving downstream neighbors of water over the years. In some areas—with the flow of even major rivers dwindling to a trickle during drought years—surface water sources are bound to dry up eventually at current rates of use.

Although agriculture, and especially rice, remains the primary water user over much of Asia, competition is driving societies to confront a stark choice: shall existing water be used in the cities to power them or to feed them? This difficult choice of diverting water away from irrigation schemes into urban water systems is looming across Asia’s most populated cities: Manila in the Philippines, Jakarta in Indonesia, Bangkok in Thailand, and Hanoi in Vietnam.

Since the largest amount of irrigation water goes to rice cultivation in Asia, controlling how much water is used for growing rice is the way to ease the tensions between agricultural and urban/industrial water use. But, rice has tremendous political clout. Even though rice cannot express its sentiments through the ballot box, the huge rural populations that depend on rice cultivation for their livelihood (and those who “simply cannot live without it”) can.

Rice cultivation occupies such an important part of a sense of social well-being within most Asian societies that any attempts to dramatically reduce it would be politically unwise, like removing the pin yourself from a grenade that’s glued to your other hand. The political backlash could be swift and loud—and crippling.

For most rice-importing countries, the international rice market is simply not reliable enough to depend on for national food security. The jury is in: farmers need to grow more rice using less water. 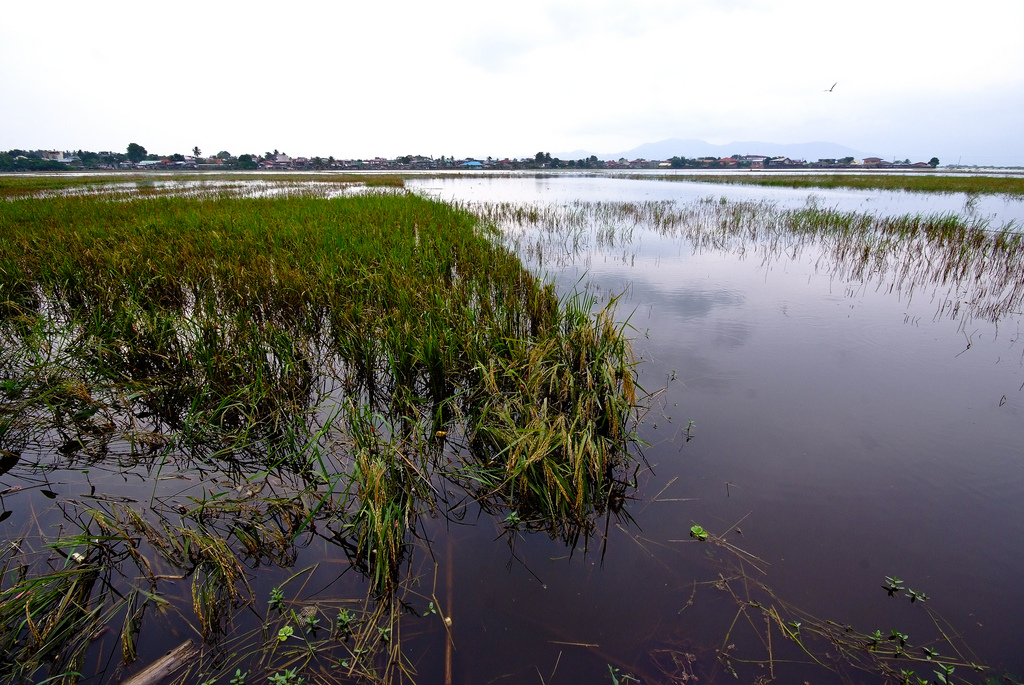 In Asia, where most of the world’s rice is grown, about 20 million hectares of rice land, such as this field in the Philippines, is prone to flooding. (Photo: IRRI)

When water becomes the raging enemy
Apart from the lack of it, water also directly affects food production and aggravates poverty in Asia’s rural areas, where almost 60% of its population lives. Extreme monsoons, that bring forth raging floods, are just as challenging as water scarcity.

In August 2017, at least 401 million people were affected by massive floods that devastated South Asia after unusually heavy monsoon rains. About 2.4 million hectares of crops were lost. Only a month before, central China suffered the same fate. These floods put 137 million people in India, Bangladesh, and China at risk, according to a report by Ben Westcott and Steve George for CNN.

Floods are also becoming a major force of destruction in the Mekong Delta and many of Asia’s coastal areas. Inundating 77 provinces, according to a Reuter’s report. The floods affected 700,000 hectares of rice-growing farmland and decimated 160,000 hectares of rice crops. The following November, more than 30,000 people in Vietnam were evacuated to safer grounds when more than 40,000 hectares of crops, including rice fields, were damaged.

“In the next 30 years, it is projected that heavy rainfall events will be increasing … in Asia, by about 20% for sure,” said climate scientist Dewi Kirono at Australia’s Commonwealth Scientific and Industrial Research Organisation who was quoted in the CNN report. 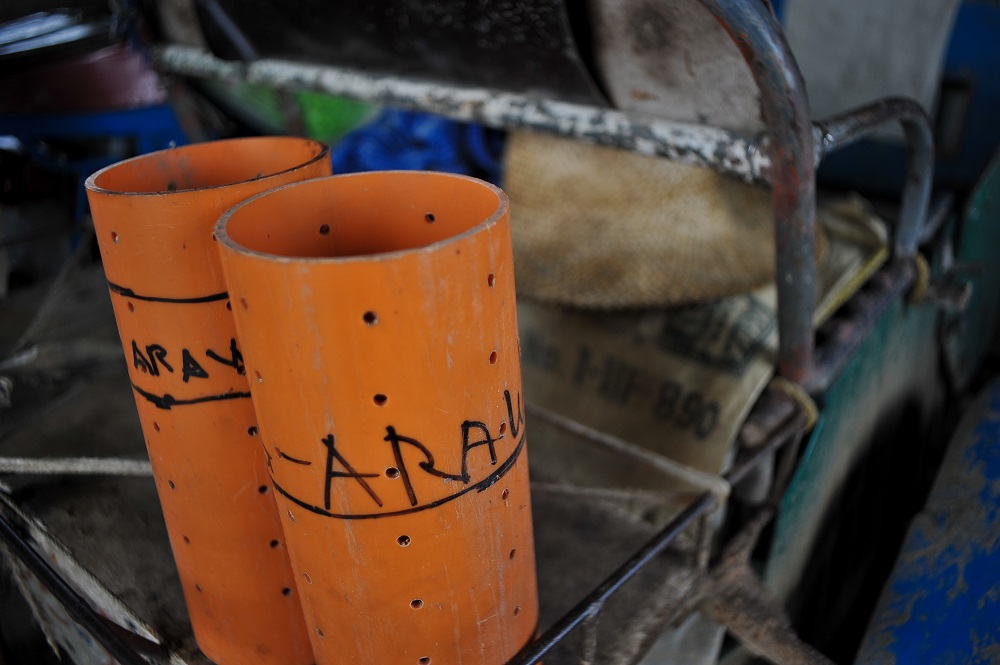 The Alternate Wetting and Drying (AWD) water-saving technology uses a perforated plastic tube, which is inserted into the rice field to monitor the water level below the soil surface. (Photo: IRRI)

And now, the good news
It is no exaggeration to say that the economic miracle of Asia since the 1960s was enabled by tremendous advances in plant breeding and crop management, together with government policies and programs that supported the Green Revolution.

In the past 50 years, rice harvests in Asia more than doubled as farmers started planting new and improved rice varieties, using better crop management, along with the growing availability of irrigation.

Although past successes have been impressive, today’s challenges facing scientists are greater than they were 50 years ago. Fortunately, available scientific tools and on-farm technologies are far more powerful than ever.

Rice researchers have identified genetic components from traditional rice varieties that make them tolerant of drought and flood. These genetic materials have been incorporated into new varieties that can produce significantly high grain yield even under environmentally stressful conditions. These varieties have been released in various countries and have improved the productivity of rice-growing areas regularly devastated by drought and floods. These varieties work best with management practices and technologies that promote sustainability as well as adaptability to climate change.

The upcoming issue, which focuses on water, features rice varieties and technologies that are already having a positive impact on agriculture and bringing economic benefits to farmers as well as goal-oriented research that will help the sector rise to the deep-rooted challenges that beset it.