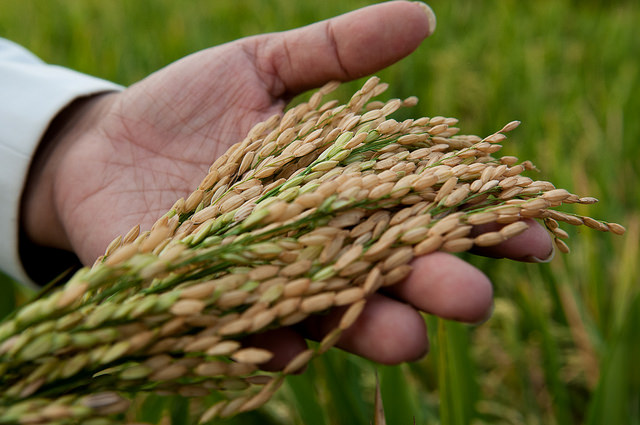 Rice is referred to as Vietnam’s “white gold” because it is not only a valuable staple crop but also one of the country’s major export products. In 2015, Vietnam exported 6.61 million tons of rice, making it the world’s third-largest rice exporter after only India and Thailand.

But, the country’s rice industry has been beset with challenges because of climate change, particularly in its regional granaries—the Red River Delta and the Mekong River Delta. These major rice-growing areas are increasingly becoming vulnerable to salt water intrusion and flooding caused by sea-level rise.

To secure enough rice for the almost 90 million Vietnamese and the people of other nations, Vietnam’s rice industry must soon adapt to the adverse impacts of climate change. Maintaining rice productivity also means sustained livelihood and income for many Vietnamese farming communities.

The recently concluded project, Climate Change Affecting Land Use in the Mekong Delta: Adaptation of Rice-based Cropping Systems (CLUES), offers a basketful of climate-smart practices and technologies that should help rice farmers in the Mekong Delta cope.

“The interdisciplinary approach adopted by CLUES yielded a range of tangible insights into dealing with future risks stemming from sea-level rise,” says Reiner Wassmann, project leader and coordinator for climate change research at the International Rice Research Institute (IRRI). “It has also provided possible response strategies in terms of adaptation and mitigation in rice-based systems of the delta.”

A 4-year initiative (2011-15), CLUES aimed to increase the adaptive capacity of the region’s rice production systems and provide farmers and management agencies with technologies and knowledge to improve food security. It was conducted in four provinces of the Mekong Delta region (MDR) with varying geographic features: An Giang (flood zone), Can Tho (intermediate flood zone with alluvial soils), Hau Giang (acid sulfate soils), and Bac Lieu (coastal area with saline-affected soils and local submergence).

The project, implemented jointly by IRRI and Can Tho University, with partners from Vietnam and Australia, under the Australian Centre for International Agricultural Research (ACIAR), involved more than 70 team members. IRRI’s project team members specialized in climate change, plant breeding, water sciences, and agronomy.

Vietnam’s rice production is an unprecedented success story. The country underwent a period of acute rice shortages and dependency on imports until the implementation of institutional and policy reforms that led to rice self-sufficiency. The past two decades saw Vietnam doubling its rice yield to become one of the top global rice producers and exporters. The country’s average yield went up to 5.89 tons per hectare (from 5.32 tons in 2010), with a total production of 45 million tons and exports of 7.3 million tons, based on FAO statistics (2015). The MDR contributes more than half of the country’s annual rice production and 90% of its export supply.

The country’s drive to improve its rice industry even further is threatened by sea-level rise where flooding and salinity conditions are predicted to become worse. The CLUES project has developed high-definition risk maps of the current and forecasted flooding depths (Fig. 1) and salinity amounts for Bac Lieu and Soc Trang provinces. 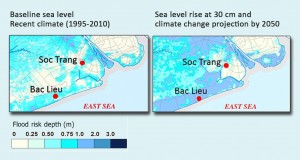 “Within the next 30 years, more than 60% of the MDR will be affected by flooding and 40% by salinity intrusion,” says Ngo Dang Phong, IRRI’s project facilitator. The maps also show that sea-level rise will greatly increase flooding depths and areas in a wide range. Its strongest impact will be felt in the coastal areas, especially during the dry season, generally decreasing upstream. Submergence caused by stagnant flooding (0.4 to 1 meter) is also predicted to extend to up to 40% of the downstream areas in the MDR. Flooding will be exacerbated because of the construction of dams, dikes, and sluices that regulate sea-water inflow coming from east of the delta.

“By using these maps, we can determine the best climate-smart practices to adapt, such as promising flood- and salt-tolerant rice varieties or other techniques,” says Dr. Phong. “We can also test and apply targeted interventions to maintain the high productivity of current rice systems.”

Promising varieties for the MDR

Given that the MDR is destined to have more frequent and deeper floods and increasing salinity, farmers will need rice varieties that have tolerance of these climate-related stresses. Thus, 300 rice varieties, comprising both traditional and improved ones, were screened as part of CLUES for their survival and recovery potential against these stresses at the study sites.

New breeding lines have been developed and field-tested for their suitability in these areas. These lines combine salt and submergence tolerance as well as high yield potential. These are set to be outscaled through participatory varietal selection (PVS) trials and seed multiplication and distribution.

Although the MDR is surrounded by water, it is not impervious to drought. In 1997-98 and 2009-10, for instance, the region experienced severe drought because of El Niño. The early end of the wet season prolonged the dry season.

A solution to the drought problem is the simple and inexpensive IRRI-developed technology known as alternate wetting and drying (AWD). It can save water use in rice paddies by as much as 25% through a cycle of draining and reflooding of rice fields that keeps water at an optimum level when needed.

In partnership with GIZ, the German development agency, 100 farmers in Bac Lieu Province assessed AWD’s viability. The farmers found that they were able to reduce the cost of pumping irrigation water, resulting in increased income. 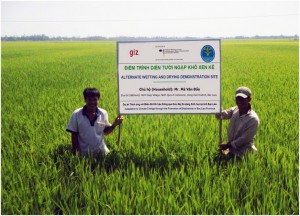 Apart from AWD’s adaptation potential, this technology has been proven effective in reducing methane emissions from rice paddies by 50%. This is especially important for climate change responses because rice production is one of the main sources of greenhouse gasses (GHG). It accounts for a sizable share of the national GHG inventory of Southeast Asian countries such as Vietnam.

A pioneering output of CLUES was the generation of new data on emissions and mitigation in rice production, which will help in identifying options for the reduction of GHG in the MDR. The project measured methane gas emission rates at various plant growth stages under different farm practices (i.e., nitrogen application and straw compost application). The data were analyzed at the Cuu Long Delta Rice Research Institute.

Results showed that the emission rate of methane in conventional field plots was consistently greater than in AWD plots. Also, methane emission rates varied at different stages of growth. After an initial increase, the emission rates peaked at flowering time and decreased with reduced water depth at harvesting time.

Farming practices, such as AWD that are climate-smart and result in low GHG emissions are highly relevant for defining and implementing new climate change policies. After the successful completion of the 2015 United Nations Climate Change Conference (COP 21) in Paris, France, rice-growing countries can now turn their attention to reducing GHG emissions without affecting rice yields.

The approach undertaken by CLUES was based on participatory research that engaged local communities during every phase of the project. It focused on the poor farmers in the four provinces who must deal with varying degrees of salinity, acidity, and flooding in their rice fields. More than 3,900 farmers were involved in field trials, PVS, and other activities. This included around 700 women who participated in PVS and participatory rural appraisal for crop and natural resource management assessment studies.

With support from the project, 18 students completed their master’s theses and four CLUES staff obtained doctorate degrees. The project also facilitated postgraduate studies for students in and outside of Vietnam. Cognizant of the importance of disseminating the research results to enrich rice science, project team members published papers in international and Vietnamese refereed journals and made conference presentations. Leaflets were disseminated to farmers, local decision-makers, and the public.

“The CLUES project is an excellent example of multi-stakeholder involvement in Vietnam,” said H.E. Le Quoc Dohan, vice minister of the Ministry of Agriculture and Rural Development, during the end-of-project workshop.

The CLUES project team built on previous work undertaken by IRRI and its Vietnamese and Australian research partners. Throughout the life of the project, the team reached out to numerous local research and government institutions and farming communities. A solid partnership was established among the Australian and Vietnamese institutions, which will continue well into the future.

Beyond CLUES, plans on disseminating and amplifying the research results among farmers and the farming communities will continue.

“We support the adoption of research results and are communicating CLUES outputs with larger audiences,” said An Nguyen, ACIAR country manager-Vietnam. “The major outputs of CLUES have been presented to policymakers in MDR provinces and to related Vietnamese ministries, such as Agriculture and Rural Development and Natural Resources and Environment. The results were also included in the Department of Foreign Affairs and Trade’s Vietnam Aid Program Performance Report for 2014-15. Relevant technical packages will be communicated to potential development donors, international organizations, and local communities in the region for outscaling.”

Taking things further, Dr. Phong suggested establishing more demonstration farms to illustrate the promising technologies produced by the project, alongside complementary training activities. Outscaling by local and national authorities with supporting policy and logistics support should also be in place.

Based on CLUES results, the concept of climate-smart agriculture (CSA) could be specified and substantiated for rice production in the MDR as well as in other mega-deltas of Asia. CSA combines mitigation as well as adaptation technologies into one comprehensive package. Several ongoing projects are now capitalizing on these results and are further expanding this concept by adding new elements such as mobile phone technologies for technology transfer and establishing Climate-Smart Villages acting as catalysts for upscaling.

CLUES undoubtedly was a rewarding endeavor with plenty of tangible and helpful results that farmers in the MDR and Vietnam’s local and national governments can exploit to improve rice production. With these results, Vietnam’s white gold industry should continue to improve—perhaps even thrive—despite the challenges brought about by climate change.

Ms. Joven is a senior communication specialist at IRRI and the CGIAR Research Program for Climate Change, Agriculture and Food Security (CCAFS).