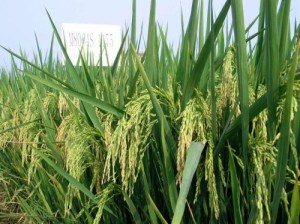 A country that is home to around one-fifth of the entire planet’s population faces some serious challenges. Perhaps the most fundamental of these is the question of how it feeds itself. Ensuring enough food for 1.3 billion stomachs is, to say the least, extraordinarily difficult. But it is something that, over the past few decades, China has done remarkably well.

One of the reasons for China’s recent food-security success is its impressively high rice yields. In the midst of much hunger and starvation in the 1960s, it was clear the country needed to boost its agricultural output. Now, at an average of more than 6 tons per hectare, China’s yields are higher than those of most of its neighboring countries. There are many reasons for this, but one in particular is the way that the country has not only embraced hybrid rice but also become the world leader in its research and development.

In conventional rice varieties, each flower contains both male and female organs, allowing the plant to reproduce itself through self-pollination (inbreeding). Hybrid rice seeds, however, are produced from crossing two genetically different parents. This results in the phenomenon of heterosis—commonly known as hybrid vigor—and the consequent higher yields.

The downside is that farmers need to buy new seeds each season. The grains produced by inbred varieties are almost genetically identical to their parents and so can be saved and planted later. If a farmer tries to plant the genetically diverse seeds (produced by sexual reproduction) saved from a previous hybrid crop, the resultant plants will display widely varying traits, in much the same way that human siblings look different. The ensuing crop will be an inconsistent, low-yielding disappointment.

Although the first paper on the application of heterosis to rice production was published way back in 1926, China was the first country to seriously investigate the technology’s potential. Led by “father of hybrid rice” Longping Yuan, director general of the China National Hybrid Rice Research and Development Center (CNHRRDC), research began in earnest in 1964. Prof. Yuan received the World Food Prize in 2004 for his efforts.

The Chinese researchers realized that, to produce commercially viable hybrid varieties, they would actually need three breeding lines—not simply two parents. These are known as the male-sterile line, the maintainer line, and the restorer line.

The male-sterile plant does not produce pollen itself, but accepts pollen from other plants, thus allowing a hybrid. In the late 1960s, the Chinese hybrid team scoured the country for naturally occurring (wild rice) male-steril  plants, eventually finding such a species in 1970 on Hainan Island.

So far, so good. It was at this point, though, that the research hit a wall. The scientists had a male sterile line, which could accept pollen from other plants. They had a maintainer line, which would allow  a continuous supply of male-sterile seeds. But they didn’t have a restorer line—any cultivar that restores fertility in the F1 generation when crossed with a male-sterile line and, hence, can be used to pollinate the male-sterile parent and produce hybrid rice seeds that can be used in farmers’ fields.

The potential of hybrid rice was threatening to remain just that—potential. Fortunes changed in 1970, however, when germplasm (seeds and the genetic material they contain) from the International Rice Research Institute (IRRI) was first sent to China for breeding inbred varieties. According to IRRI hybrid rice breeder Fangming Xie, it was a eureka moment: “They tested the IRRI lines to see if they could act as restorer lines, and bingo—got it!”

For farmers to make a worthwhile investment in hybrid seeds—which can be used for only one season—they need to produce a yield at least 15% higher than that of the farmers’ best available inbred variety. Dr. Xie, who obtained his master’s degree at CNHRRDC as a student of Prof. Yuan, says this was another area in which the IRRI germplasm helped springboard China’s hybrid rice program. Because the IRRI germplasm was relatively genetically different from the Chinese maintainer lines, it prompted sufficient heterosis to boost yields to the required level. As a bonus, the IRRI lines were more resistant to pests and diseases than the Chinese varieties.