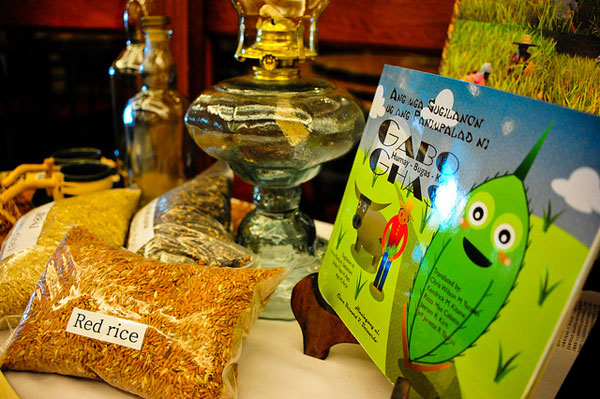 More than being entertaining, a well-told story may serve as an agent of change and cultural appreciation. The Adventures of Gabby Ghas is a story remarkable for its potential in communicating a strong message about the value of rice and rice farming. Written in 2006 by Virna Karla Sebastian, Erika Thea Ajes, and Aya Arce, the book won in the English category of a story-writing competition conducted by the Asia Rice Foundation and Alpha Phi Omega Service Sorority, in collaboration with the Philippine Department of Education. The story follows Gabby Ghas, a plucky rice grain, in his search for his place in the world. In the course of finding his purpose, he encounters other rice seedlings, weeds, insects, and other creatures. Eventually, Gabby Ghas ends up on a family’s dinner table, where he realizes that his destiny is to provide nourishment for people.

Beyond the storybook pages

Gabby Ghas has become an ambassador of sorts for the Asia Rice Foundation. The foundation was put together by the alumni of the International Rice Research Institute and the University of the Philippines in Los Baños, Laguna. The Asia Rice Foundation aims to support cultural and educational advocacy efforts and promotes awareness of and public appreciation for the role of rice within the diverse Asian cultures. “Gabby Ghas will bring the importance of rice to the consciousness of young people,” said Dr. Benito Vergara, chairman of the Asia Rice Foundation. “The book is an excellent means of making young people learn more about rice and appreciate more the role of rice farmers,” said Carmen Paule, chair of the Asia Rice Foundation short story competition. Since its original publication, the story of Gabby Ghas has been told and retold to many pupil while thousands of copies of the book have been purchased and distributed in public schools. “Recently, the Department of Education ordered 6,000 copies of the book for its library project,” Dr. Paule added. “We are greatly overwhelmed.”

From Gabby to Gabo

Dr. Mira Sinco, president of Foundation University in Dumaguete City, Philippines, felt the need for a version for students in the Visayan region of the country. Thus, the story of Gabby Ghas, previously published only in English, was translated into Cebuano, a widely spoken language in the region. In October 2012, Ang mga Sugilanon ug ang Panimpalad ni Gabo Ghas, the Visayan version, was launched. It is co-published by the Asia Rice Foundation, the Southeast Asian Regional Center for Graduate Study and Research in Agriculture (SEARCA), the Philippine Rice Research Institute, and the Department of Agriculture-Bureau of Agricultural Research. “Though this may not be the usual fare in SEARCA’s publications, we saw it as a way of introducing to our youth the value and culture of eating rice and, invariably, the appreciation of agriculture and the value chain from which this important commodity comes,” said Gil Saguiguit, Jr., SEARCA director.

Department of Education Secretary Armin Luistro suggested having the book translated into the 12 major languages of the country. Dr. Saguiguit also raised the idea of translating The Adventures of Gabby Ghas into Bahasa Indonesia as a first step in expanding its readership to other countries in the Southeast Asian region. “I’m on my way to see the world!” Gabby Ghas said at the beginning of his adventure. With the help of friends in the real world, this tiny rice grain with a big mission is certainly making great strides.
_________________________________________

To order copies of the English version of the book, please visit asiarice.org