In the aftermath of Cyclone Sidr, the rice farmers of southern Bangladesh are struggling to get back on their feet. Immediate relief is needed, but science can provide technologies that help minimize the damage caused by the next disaster. 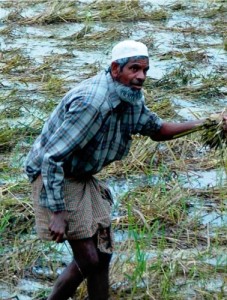 Nasiruddin Khan harvests what is left of his rice crop after it was devastated by Cyclone Sidr in November 2007. (Photo: Adam Barclay)

The winds started to pick up during the afternoon of  what should have been anormal Thursday in southern Bangladesh. There had been warningsof a storm, somewhere out in the Bay of Bengal, heading toward the coast. But the people of Chornajir Village didn’t think things would get too bad. Besides, there was work to be done in the fields and the nearest shelter was a long walk away, especially for the young children. If it rains, so be it. Hopefully, the crops will be OK.

As evening approached, though, it became clear that 15 November 2007 would not be a normal Thursday. Chornajir, like most of the villages in Patuakhali District, is poor. People scrape by from season to season, trying to grow enough rice to feed themselves and maybe sell a little if they’re lucky. It’s a precipitous existence: one failed crop, one big flood, and it can send people spiraling into destitution. And, at this level of poverty, the channels of communication, which should bring news of floods and storms, don’t always work like they should.

Cyclone Sidr, a category-4 brute with peak winds of 250 kilometers per hour, slammed into the southern Bangladesh coast in the evening. By the time the villagers of Chornajir, around 20 kilometers inland, realized this was more than a common storm, it was too late to get to the shelter safely.

If you’ve never been to Bangladesh, you may not know how flat the country is. Apart from hills in the southeast and northeast, the land rarely gets more than a few meters above sea level. The country is effectively an enormous delta formed by the confluence of the Ganges, Brahmaputra, and Meghna rivers and their tributaries, which catch the Himalayan snow melt and wend their way toward the Bay of Bengal.

Hundreds of rivers and streams crisscross their way out to sea, the end result being an entire country that floods like a bathtub if it rains too much. Add to that a cyclone induced tidal surge and you start to understand how devastating a major storm can be here. In 1970, a cyclone killed up to half a million people—one of the largest single disasters in human history. In 1991, another cyclone killed more than 130,000. In terms of the cost to human life, Sidr was not as brutal, causing the deaths of around 4,000 people (though still a major disaster by any definition). Fortunately, it struck at low tide, so the surge was not as powerful as it might have been. And, despite the communication breakdowns that left Chornajir residents in grave danger, a great number of people made it to one of the many cyclone shelters that have been built in the past three decades.

As the wind strengthened and the rain hammered, the floodwaters grew. First, the rice crops went under, then the lower houses and huts. Some people, such as Hasina and her husband, tried to make it to the nearest shelter. Soon after they set off, the water had risen above the level of the road. Hasina’s husband carried their 7-year-old daughter. Just staying on the now invisible road was almost impossible; holding onto a child at the same time proved too much. Amid the chaos, deafened by the screaming wind, Hasina’s daughter was swept away. Like thousands of others, she wasn’t found until it was too late.

It was a sickening blow to a family already doing it tough. There was precious little time to grieve, though—in the wake of tragedy, Hasina and her husband were forced to turn their thoughts to finding food and caring for their remaining family

Nazma Begum was luckier. Her husband and son made it through unscathed. But her livelihood was swept away in the muddy water. The small hut in which she and her family lived was ruined. Her 0.8- hectare rice field, from which she and her husband expected to harvest the food that would prevent them from going hungry, was destroyed. The seeds she had stored to use the following season were gone as well, along with the family’s few chickens, their vegetable crop, and almost all of their personal belongings.

In all, Sidr affected around 2 million families comprising around 9 million people. More than 1.5 million homes were destroyed. Just as distressing, around 1 million hectares of crops—predominantly wet-season (known as transplanted aman) rice—were damaged or ruined. Across the whole affected area, average crop loss was 50%. Close to rivers and the coast, though, farmers suffered complete loss of their crops.

International Rice Research Institute (IRRI) weed scientist David Johnson, who visited the Sidr-affected area in December 2007, points out that another critical issue was the stage of plant growth when the floods hit, which happened to be around the flowering period. The effects on the rice crop appeared to be quite different, depending on whether it was at, before, or after flowering, which lasts about a week. Farmers recovered at least some rice if the crop was hit before or after flowering. If the floods and winds hit a flowering crop, though, the plants became completely sterile and did not produce grain.