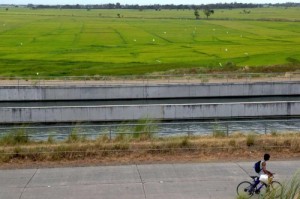 In 1998, the farming community of Canarem, 120 kilometers north of Manila in the Philippine province of Tarlac, had reason to celebrate. The Philippine National Irrigation Administration (NIA) funded the construction of a deep-well pump, designated P- 38, that would allow the farmers to irrigate their rice fields. Previously dependent on rain or shallow tube well pumps, which often run dry, P-38 promised to help Canarem’s several dozen farmers produce higher-yielding, more reliable crops.

Sure enough, P-38 did improve things. Farmers had access to more water and started growing an additional dry-season rice crop each year. But the celebration was muted.

NIA paid in advance for the diesel that fueled the pump, with farmers repaying with a portion of their harvest at the end of the season. With a steady source of irrigation water and no need to pay up-front fuel costs, farmers adopted a “too much is better than not enough” policy.

As new members joined the cooperative, enticed by P-38’s promise, each farmer’s wait between irrigations—which should have been 7 days—grew to almost 2 weeks. In the dry season, the interval became so long that fields dried out and the soil began to crack. Some of the increasingly anxious farmers would sneak out at night and divert water into their own fields by placing holes underneath their paddy dikes. Others turned to alcohol. Village officials were called in to resolve conflicts.

For 3 years after the construction of P-38, tensions and distrust grew among the families of Canarem.

Then, in 2002, two events conspired to turn things around. First, with the rising cost of fuel, NIA announced it would no longer pay for diesel, which had more than quadrupled in price since P-38 began operating. Second, a team of researchers arrived, hoping to introduce a water-saving technology known as alternate wetting and drying, or AWD (also called controlled irrigation).

Scientists at the International Rice Research Institute (IRRI) and the Philippine Rice Research Institute (PhilRice) had established that rice need not be continuously flooded. It can be flooded to a lesser extent than usual (to a depth of 3–5 centimeters instead of up to 10 centimeters), allowed to dry to a degree, then re-flooded, with this cycle repeated throughout the season if the soil remains flooded throughout the all-important flowering period. Up to a quarter less water is needed and there is no drop in yield. Importantly, farmers don’t need to make any other major changes to the way they manage their crop.

The practice, confirmed in experimental fields, needed to be extended to real farms. So, IRRI and PhilRice initially teamed up with NIA staff to introduce AWD to farmers. Canarem seemed the ideal place to start but, according to Vic Vicmudo, manager of NIA’s Tarlac Groundwater Irrigation Systems Reactivation Project, this was easier said than done.

“For centuries, farming in the Philippines has been based on the idea that, the more water, the higher the yield,” says Dr. Vicmudo. “It’s not easy to reverse that belief.”

But the plain fact is that, in many areas, rice farmers simply don’t have enough water. Bas Bouman, water scientist and head of IRRI’s Crop and Environmental Sciences Division, says that it was this understanding that drove not only the initial collaboration but also the participation of other organizations such as state colleges and universities.

“It started in 2000 with NIA and PhilRice on a very small scale,” recalls Dr. Bouman. “Step by step, more and more partners came on board—now, we can barely count the number of partners involved. Many of these attended a training course we ran in 2004, and took it from there on their own.”

Dr. Bouman says the urgency stems from farmers’ lack of choice. “We often get asked, ‘How can you convince farmers to save water?’ My standard reply is that we don’t need to convince them to save what they don’t have. These technologies are really about helping farmers who are unable to keep fields flooded to get the best out of the limited water they have,” he explains.

Jump forward to the present, and Canarem is a different place, says Manuel Apolonio, secretary of the P-38 Irrigation Service Cooperative and owner of a 2-hectare farm.

“There used to be so many conflicts between cooperative members and managers,” Mr. Apolonio recalls. “Now, the farmers know how to manage water. Before, if the soil started to crack, people thought the crops would die. Now, they know that small cracks are OK.”

In a way, farmers were practicing AWD before it was formally introduced. But it was an uncontrolled AWD, forced onto farmers by insufficient and poorly managed irrigation. With the knowledge of how to use water more efficiently, the yields obtained by Canarem’s farmers using AWD, at 5–6 tons per hectare, are the same as when they tried to maintain continuously flooded fields.

Ramon Ganiban, P-38 cooperative president and owner of a 4-hectare farm, says that when the researchers and NIA staff introduced them to AWD, many of the cooperative’s 61 farmers were skeptical. Now, the cooperative’s success has inspired neighboring communities.

Ironically, having farmers pay for their own fuel was a key to the technology’s success, as it provided a financial incentive to use less water. Before they learned about AWD, farmers ran the pump for 10–12 hours to irrigate a single hectare. That has been reduced by more than half, to 4–5 hours.

AWD rice crops also require less labor and are 20–25% cheaper to manage than continuously flooded crops, meaning higher profit for farmers. In fact, under AWD, some Canarem farmers have gone from barely breaking even from rice farming to making a modest income.

“There’s really been a big change in the farmers’ mind-set and culture,” says Mr. Ganiban. “Now, people know that, if they’re short of money for fuel, they can just flash-flood the crop and it will be OK. We don’t need to prove AWD anymore: we’ve done it for 6 years and we know it works. AWD has really strengthened the cooperative. There are no more conflicts and farmers understand each other’s needs much better.”

View the article as PDF