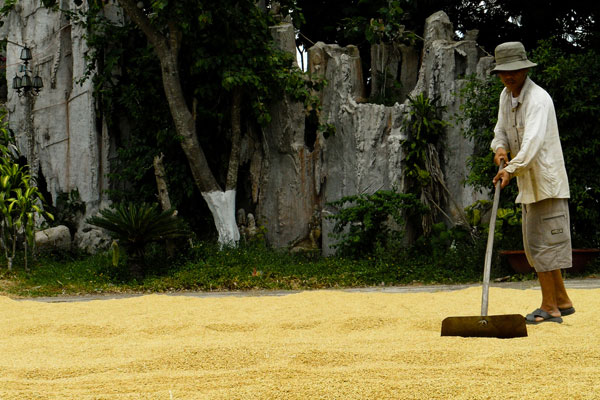 Vietnam’s mighty Mekong Delta comprises nine river mouths that give it its local name, “Cuu Long,” or “nine dragons.” Every year, it supplies Vietnam with around 20 million tons of rice, which is about 50% of the country’s total production. But, the significance of the rice supply from the Mekong Delta goes beyond Vietnam’s own 91 million rice consumers.

In 2011, more than 6 million tons of the Mekong Delta’s rice production were exported, making Vietnam the second-largest rice exporting country in the world. The country’s rice production could be critical to rice-importing nations, especially African countries, as it provides a pool of “cheap” rice that is traded globally alongside the more expensive premium rice coming from other major exporters such as India and Thailand.

Under threat of climate change

Poking out into the South China Sea, the Mekong Delta is exposed to sea-level rises along its extensive coastlines on its western, southern, and eastern boundaries. It is also the drainage point for the nearly 5,000-kilometer-long Mekong River and the entire Mekong Basin of 795,000 square kilometers.

Changes in rainfall distribution across the Mekong Basin and increases in extreme rainfall occurrences will affect river discharge, or the amount of water that flows through the riverbed, and alter hydrological patterns, including the magnitude, frequency, and duration of high and low flows within the Mekong Delta. Thus, the risk of flooding will grow across the delta’s vast rice-growing areas.

Rice farmers in the Mekong Delta are no strangers to coping with floods. However, in 2011, flooding came earlier and was worse than normal, according to Dr. Nguyen Hieu Trung, dean of the College of Environment and Natural Resources at Can Tho University in Vietnam.

Sea-level rise is predicted to further block the river discharge into the sea, thus increasing flooding and aggravating salt-water intrusion in rice-growing areas. And, as rainfall patterns change, low or late rains at the start and end of the rice cropping season may result in drought, which could limit the productivity of rice farms.

“If the world wants our farmers to keep producing rice, then we must help them prepare for climate change,” said Dr. Trung.

Aiming to help farmers adapt their rice farming practices to climate change, the CLUES project (Climate change affecting land use in the Mekong Delta: Adaptation of rice cropping systems) could not have come at a better time.

Supported by the Australian Centre for International Agricultural Research, its goal is to help rice farmers in the Mekong Delta. It brings together a mix of international and national research and development partners, including the International Rice Research Institute (IRRI) as project leader, Australia’s Commonwealth Scientific and Industrial Research Organisation, the International Water Management Institute, Can Tho University, Cuu Long Delta Rice Research Institute, Southern Institute for Water Resource Planning, Institute for Agricultural Sciences in South Vietnam, and the Departments of Agriculture and Rural Development in Mekong Delta provinces along a transect from the coastline to the inner sections of the delta.

“The CLUES project is the first of its kind in that it focuses on rice production and climate change in a region-specific context,” said Dr. Reiner Wassmann, CLUES leader and head of climate change research at IRRI.

“We started CLUES in 2011, but the work builds on a strong history of collaboration with our partners in Vietnam with whom we have been working for many years,” he added.

One focus of CLUES is to help Vietnam speed up the development and deployment of rice varieties with improved tolerance of submergence and salinity.

Dr. Nguyen Thi Lang, head of the Genetics and Plant Breeding Division at the Cuu Long Delta Rice Research Institute, explained that, ideally, they want to breed new rice varieties that combine submergence and salt tolerance, resistance to local diseases, and the capacity to grow well on acid-sulfate soil, which is a locally occurring soil type.

From March 2011 to July 2012, CLUES partners conducted extensive field trials in three provinces within the Mekong Delta (Bac Lieu, An Giang, and Hau Giang) and Can Tho City. These trials were used to select suitable rice cultivars with improved tolerance of salinity, submergence, stagnant flooding, and acid-sulfate soil. By November 2012, Vietnam had officially released 15 new rice varieties for commercial production that incorporated some of these traits.

When it gets salty and dry

The CLUES team is also working with the German Agency for International Cooperation (GIZ) on the project Adaptation to climate change through the promotion of biodiversity in Bac Lieu Province to help local farmers manage saline and dry conditions.

Mr. Nguyen Van Trung, 44, a farmer in Bac Lieu, used to grow normal varieties, but now that he has seen these new varieties, he said that he would like to try them.

In addition, the GIZ team, headed by Mr. Joachim Hofer, has initiated a CLUES training course on alternate wetting and drying (AWD)—a water management technique that reduces water use by 15–30% without yield losses. After the course, about 200 farmers used AWD during the autumn-spring season of 2011 and 2012 in Bac Lieu. With AWD, farmers can save 2 to 4 million dong (US$96 to $192) per hectare on fuel costs plus retain their yields, if not get a little more.

Climate change may be fast taking hold of Vietnam’s “nine dragons,” but, hopefully, it won’t drastically impair rice production given the promise of newer varieties and smarter technologies.