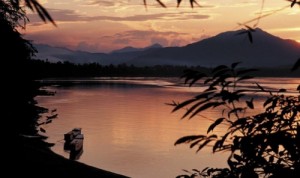 The Mekong River, pictured here at Luang Prabang, Lao PDR, is central to the lives of hundreds of millions of people. (Photo: Peter Fredenburg)

The Farming Systems Research Group at Khon Kaen University, in Thailand’s hardscrabble northeast, studies the evolution of local farming systems. In collaboration with the International Rice Research Institute (IRRI), it has focused particularly on those that integrate rice farming with animal husbandry. Suchint Simaraks, head of the research group, recreates life on the farm in northeastern Thailand as it was in the middle of the 20th century.

Most farmers, he says, grew their traditional varieties of glutinous rice. It was eaten by hand or scrunched into a pocket, to be eaten during a moment’s shady rest in the oppressive heat of the day. Rice was their major crop, planted with the first rains in May or June and nurtured through the rainy season, which was equally prone to flood or drought. If the weather was kind, farmers had just enough rice to last through the year. But the years without drought or flood were the occasional ones, so farmers’ arts of survival were finely honed. Always wary of theft, they kept cattle and buffalo under their houses at night. The animals were their “money in the bank.” If an urgent need for cash arose, a beast was sold. Meanwhile, land preparation depended almost entirely on buffalo power. Chemical fertilizer was unknown, so the manure shoveled off the corral was the universal fertilizer. It nourished the mulberry trees that fed the silkworms that produced silk for the family to weave. It was used to fertilize tobacco crops, was saved for the rice nursery before the rain, and was available for vegetable plots around the house. In the dry season, the animals roamed freely in the paddies, widely distributing their manure. Farmers also threw manure into natural ponds to feed the fish, crabs, and aquatic insects that would later feed humans. Nothing was wasted. Sometimes farmers found personal nourishment in the manure itself: dung beetles for deep-frying, or the seeds of certain wild fruits to be shelled and eaten like nuts.

Times have changed in Thailand, even in the relatively traditional and disadvantaged northeast. According to Dr. Suchint, integrated crop-animal systems started getting squeezed in the 1970s as large tracts of forests disappeared, leaving farmers short of grazing areas for their cattle and buffalo.

“Around 1961, more than half of the land in this area was covered with forest,” he says. “When the government introduced timber concessions, the forested area declined sharply. The cleared forests were replaced by cash crops such as [fiber-producing] kenaf and cassava. This, in turn, stimulated more forest-clearing. At the same time, the human population swelled, causing further acceleration of forest-clearing for settlements and more cash crops. The beasts could no longer be allowed to wander free, and the prices the livestock brought were not high enough for farmers to continue raising them on their farms.”

Government policy accelerated the trend. “During the past few decades, policy reforms were instituted in Thailand that gave emphasis to strengthening exports, in particular agricultural exports,” Dr. Suchint says. “These policies transformed smallholdings from near subsistence level to more commercialized and specialized systems.” Today, recovering prices for meat and growing demand for milk have made livestock once again an attractive option for farmers. Meanwhile, the Thai government actively encourages the revival of integrated crop-animal systems,  granting a million baht ($24,000) to every village in the country for investing in small community-based ventures. “Farmers have been borrowing this money to buy more cattle,” Dr. Suchint reports. “So, the traditional farming system is recovering.”

Although large specialized farms enjoy many commercial advantages over more traditional smallholdings, Thailand’s experience shows the danger of plunging headlong into specialized agriculture without regard to its environmental, economic, and social sustainability. As Thai farmers rediscover the half-forgotten virtues of many of their traditional integrated farm practices, less developed countries in the Greater Mekong Subregion can benefit from the Thai lesson—and from research that aims to guide the evolution of integrated systems for the benefit of farmers and consumers alike.

“Integrated crop-animal systems are popular because they maximize the use of farm resources,” explains Mercedita Sombilla, a former agricultural trade and development specialist in IRRI’s Social Sciences  Division. “They employ idle rural manpower, generate supplementary income for farm families, and reduce financial risk and rural poverty. And they are—or at least can be—environmentally sustainable.

“Intensified development of these systems is appealing as the major actors and beneficiaries are small farmers and landless families,” she adds. “However, sustaining the complementarities between crop and animal activities is a big challenge, especially in the rice areas of Southeast Asia.”

Dr. Sombilla coordinated studies on integrated crop-animal systems in the Greater Mekong countries of Thailand, Cambodia, and Vietnam (considering the Mekong and Red River deltas separately), as well as in the Philippines and Indonesia. The studies, published in the book Integrated Crop-Animal Systems in Southeast Asia: Current Status and Prospects, describe these systems and track their evolution; investigate their potential for poverty alleviation, food security, and livelihood improvement in rice-farming communities; and advise on how best to address the problems that constrain their sustainable, market-oriented development.

“Livestock production in most parts of Cambodia is so intimately related to rice production that neither can be studied nor understood in isolation from the other,” comments El Sotheary, Dr. Sombilla’s collaborator at the  Cambodian Agricultural Research and Development Institute. “The great majority of the livestock are raised in integrated farming systems, most of which have rice as their major component.”