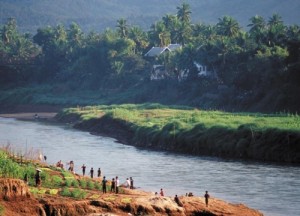 LAO farmers tend vegetable terraces on the Nam Khan River near Luang Prabang. Improved rice production allows farmers to diversify their crops, and therefore their diet and income—but life throughout Lao PDR, seen in the surrounding photo, continues to depend on rice. (Photo: Peter Fredenburg)

In 1990, the Lao People’s Democratic Republic (Lao PDR) needed more food. The rice industry in particular and agriculture in general were ready for change. It had been a long time since the country had produced enough rice—from which the average Lao person receives around two-thirds of his or her calories—to feed everybody. Something needed to happen, and soon.

History tells us that change did arrive that year, along with the Swiss Agency for Development and Cooperation (SDC) and the International Rice Research Institute (IRRI). The Lao-IRRI Rice Research and Training Project aimed to completely revitalize the Lao rice industry. The next 15 years would see an enormous surge in Lao PDR’s research and training capacity as well as the long, hard journey to rice self-sufficiency.

John Schiller, the former IRRI scientist who led the project from its start in 1990 until 2001, recalls the situation when the project began. “In 1990,” he explains, “there was almost no research aimed at developing technologies for improving rice production, almost no commercial fertilizer use, and limited rice research expertise.”

After Dr. Schiller left, Karl Goeppert took over project management in 2001-04, followed by IRRI agronomist Bruce Linquist, who arrived in Lao PDR in 1997 and led the project in 2004-05. Dr. Linquist points out that the country’s problems were compounded by a dearth of international aid before the project began. “We were the only ones doing rice research and we basically started from scratch,” he says.

IRRI entomologist Gary Jahn, who took over management of the project in July 2005, will oversee the transition from a bilateral project to a fully fledged national research program, completely managed and coordinated by the Lao government’s National Rice Research Program (NRRP) under NRRP director Kouang Douangsila.

How did the Lao-IRRI Project improve rice production and build a national research program? For a start, the timing was good and, as the project began, several key factors converged.

“The government introduced favorable agricultural policies,” explains Ty Phommasack, the vice minister for agriculture and forestry. “At the same time, IRRI arrived with technologies and know-how and SDC came in with long-term financial support. The government’s support has been a big factor from the very start, and the impact it has had on the Lao rice industry really is unprecedented.”

Dr. Schiller adds that the minister for agriculture and forestry, Siene Saphangthong, who spent time at IRRI as a research scholar and served on the institute’s board of trustees in 1996-2001, strongly supported the project in its early stages, when he was vice minister. “As a result,” he says, “we didn’t suffer a lot of the work-related frustrations that other agencies faced.”

It would be impossible to point to a single measure of success in a project as broad as Lao-IRRI. Statistics, such as the amount of land planted to Lao modern rice varieties—high-yielding varieties developed specifically for Lao conditions from the Lao-IRRI research programs—tell part of the story (see Growing impact on page 27).

“At the field level, one of the most obvious impacts has been the release of the improved Lao rice varieties,” says Dr. Schiller. “In the Mekong River Valley in 1990, only 5% of the lowland rice area was under improved varieties. By 2004, many provinces had up to 80% of their lowland area planted to improved varieties.”

The impact of these modern varieties has been profound, playing a huge part in Lao PDR increasing rice production between 1990 and 2004 from 1.5 million to 2.5 million tons. From 1996 to 2004—the period during which technologies were disseminated—the country saw a 79% increase in rice production with a corresponding increase in land area planted to rice of only 39%—and most of this increase was due to double cropping of rice, not clearance of new land. The average annual growth rate in production for the 15-year duration of the project is just above 5% and this increases to more than 7% since 1996. According to Sengpaseuth Rasabandith, head of the Food Crops Department at the Lao National Agricultural Research Center, “Without the Lao-IRRI Project, there would not have been national modern varieties to release. The project has created a ‘rice revolution’ in the country.”

While the impact of improved production is unquestionable, Drs. Schiller and Linquist agree that the most significant success has been the growth of Lao PDR’s agricultural research capacity. “You can’t go anywhere in Lao PDR and not bump into somebody who’s benefited from Lao-IRRI,” says Dr. Linquist. “If you’re in the agricultural sector, there have just been hundreds of people who have been trained through Lao-IRRI. Training has been huge.