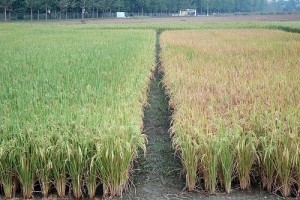 To understand the importance of rice farming to Bangladesh, look at the numbers. This densely populated country-more crowded than any other on Earth bar city-states such as Singapore-has 146 million people. Around 80 million of them rely on agriculture for their livelihood. Agriculture alone employs around two-thirds of the labor force of almost 70 million and rice is the country’s most significant agricultural product, accounting for more than three-quarters of total cropped area. Add to this the fact that the average Bangladeshi receives around three-quarters of his or her calories from rice and you begin to understand the grain’s significance. Further, in India and Bangladesh, the poorest people send up to half their income on rice. While India doesn’t rely on rice in the same way as its northeastern neighbor, rice remains India’s single most important agricultural product. Given India’s sheer number-its 1.1 billion people constitute almost one-fifth of the world’s population-merely maintaining rice productivity is not enough; as the population rises, India must produce more rice on less land.

The Indio-Gangetic Plains, running east from northwestern India across to the Barind area of western Bangladesh, are some of the most agriculturally important tracts of land on the planet.Home to India’s rice-wheat cropping system, the plains are the most productive area in the country and vital to the food security of India. Infrastructure, such as irrigation, is relatively well developed and many farmers have access to mechanical equipment including tractors and machine seeders. Despite these advances, farmers here face problems, such as deteriorating soil health, rising costs, and declining productivity and labor availability. Without workable solutions, things are likely to get worse.

As you move east along the plains into eastern India and then northwestern Bangladesh and the High Barind Tract, the farm sizes and level of development tend to diminish. In the Barind, farms average less than 1 hectare in size, on which farmers do their best to simply grow enough food for themselves and their families. Rice farming here relies more heavily on manual labor and simple tillage equipment.

Despite dramatic differences between farms at either end of the Indio-Gangetic Plains, farmers along their length share several problems-two of which have grave implications for rice production and, by extension, for the welfare and food security of many millions of people.

First, as people who traditionally made their living working on farms are uprooting and moving to the cities to find work in the developing urban and industrial sectors, the availability of farm labor is decreasing-particularly during the peak periods of farm operations-and, consequently, becoming more and more expensive.

Second, and perhaps even more pressing, are the issues of water availability and cost. Farmers the world over are, of course, dependent on water . In Bangladesh, and on the least developed farms of the Indio-Gangetic Plains, farmers rely on monsoon rains. If the rains are too late or too little, farmers may not be able to establish the crop and, even where they do, yields can be decimated. At the other end of the plains, many farms pump ground water when and as needed but unless something changes soon, this cannot continue. Water tables are falling and, as global fuel prices continue their steep climb of the last few years, the cost of irrigation is becoming prohibitive to the point where farmers are foregoing the use of their irrigation systems and, like their Bangladeshi counterparts, waiting for the rains.

So, what are the alternatives? One approach, which has emerged as a promising part of the solution across the Indo-Gangetic Plains, is deceptively simple: rather than transplanting rice seedlings into flooded fields, sow rice seeds directly into an unflooded field. Such direct seeding can offer relief in terms of both the water and labor problems and, since 1999, has been investigated as part of two projects—Promotion of cost-effective weed practices for lowland rice in Bangladesh and Promotion of integrated weed management for direct-seeded rice in the Gangetic Plains of India—with collaboration among the International Rice Research Institute (IRRI), the U.K.-based Natural Resources Institute (NRI), and the University of Liverpool, with additional funding from the Crop Protection

Programme of the U.K. Department for International Development. Through IRRI, the work is linked with the Irrigated Rice Research Consortium and the Consortium for Unfavorable Rice Environments. With their in-country collaborators—the Bangladesh Rice Research Institute (BRRI) and, in India, G.B. Pant University of Agriculture and Technology in Pantnagar, Narendra Deva University of Agriculture and Technology in Faizabad, C.S. Azad Agriculture University in Kanpur, and Rajendra Agriculture University in Patna—the projects have examined the advantages, challenges, opportunities, and constraints of direct seeding across the Indo Gangetic Plains and the Barind.

Although the idea of a rice farm often evokes images of flooded paddies and bunded terraces, direct seeding is not a new approach. Until the early 1960s, most Indian and Bangladeshi farmers direct seeded their crops. At that time, the introduction of a more productive model of rice production, which exploited high-yielding varieties and increased fertilizer use, triggered a move to transplanting. In an ever changing production environment, and despite its advantages, there is growing recognition that the transplanting model isn’t ideal for every location and circumstance.

There are a number of options for direct seeding, though the principles remain the same. Rice can be sown with either dry or wet (pregerminated) seed, which is either placed in rows or broadcast.

Bangladeshi farmers have tested dry-seeding rice in furrows made by a lithao, a simple, low-cost metal plow drawn by two people. In both Bangladesh and India, if soil moisture is adequate, pregerminated rice seed may be either broadcast by hand or sown in rows with an inexpensive plastic drum seeder, pulled by a single user (see Drumming up success in Rice Today Vol. 4 No. 2, pages 22-27). Meanwhile, on many northeastern Indian farms, farmers use tractor-mounted mechanical seeders that sow seeds at chosen rates and simultaneously apply fertilizer.

The specific advantages of direct seeding vary with farmers’ circumstances. David Johnson, an IRRI weed scientist and one of the project’s investigators, explains the situation at the eastern end of the Plains, in Bangladesh.

“It takes about 500 mm of cumulative rainfall for a farmer to be able to establish a rice crop through transplanting,” says Dr. Johnson. “If farmers direct-seed, they can establish the crop from about one-quarter of that.”

By direct seeding, therefore, farmers can avoid the hardships of 2003, 2004, and 2005, when the monsoon rains arrived so late that many growers were unable to establish a rice crop at all. Further, even if there is sufficient rain for farmers to transplant on time, they are still at the mercy of the weather. Drought during the rice plants’ flowering stage can devastate the crop, causing yield losses of 50% or more.

M.A. Mazid, principal scientific officer and head of the BRRI regional station in Rangpur, explains the situation in the Barind.

“Generally,” he says, “farmers are supposed to transplant by mid-July. But if there’s no rain, they can’t transplant and the seedlings get older—40, 50, even 60 days, while seedlings should be no older than around 30 days to get the best yields.”

“Earlier establishment has an additional advantage,” adds Dr. Johnson, “because it means earlier harvest, which increases the chances of growing a dry-season crop like chickpea, a cash crop that helps increase income and so improves the livelihood of farmers and their families.”

Mr. Barclay worked for the International Rice Research Institute (IRRI), where he managed, wrote for and edited the institute’s magazine, Rice Today, and handled IRRI’s media relations during the international rice crisis of 2008.