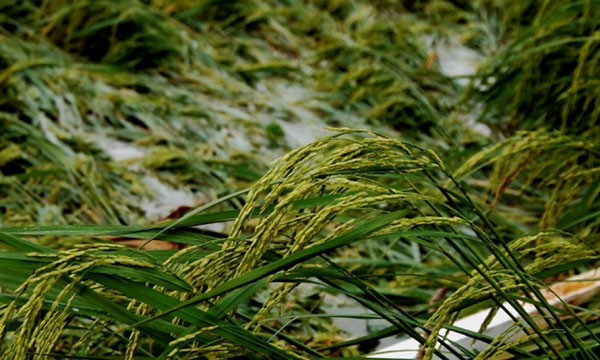 Global rice prices have been fairly stable since 2012 after a run up in the first half of 2011 in anticipation of the reintroduction of the Thai mortgage scheme that guarantees farmers a set price for their rice. This was followed by a subsequent drop in the fourth quarter of 2011 after India re-entered the nonbasmati export market, which made India the top rice exporter in 2012, thus dethroning Thailand for the first time in three decades (Fig. 1, below).

In the past few months, however, rice prices have come under pressure because of weak demand and the large stockpiles in key exporting countries. The strong harvest from the wet-season crop in Asia has helped to lower export quotations from Vietnam, Pakistan, and India (Fig. 2, below). But, Thai prices remain unruffled by the global situation mainly because of the mortgage scheme. This mortgage scheme has also created more uncertainty in the global market as traders do not know when mortgaged rice will be released and at what price.

For many Asian countries, including Vietnam, China, Bangladesh, and Pakistan, 2012 rice production is estimated to be at record levels. According to the USDA, overall global rice production for 2012-13 is estimated to be around 468 million tons (milled equivalent), 2 million tons higher than the record production of 2011-12. But, ending stocks for 2012-13 are projected to decline slightly from the 105 million tons in 2011-12 to 103 million tons because of strong growth in rice consumption. In the past 7 years, global rice consumption has increased by more than 50 million tons, with an average annual growth of nearly 2%. This has restricted the accumulation of stocks at a faster pace despite the good harvests in the past few years.

In 2012, global rice prices were largely supported by an unexpected source—China, which has emerged as the second largest importer behind Nigeria, with 2.6 million tons of imports (Fig. 3, right). This is four times more than what China imported in 2011. Experts are split on the reason behind the recent rise in Chinese rice imports. Some believe that rising demand for rice by Chinese consumers has outstripped production growth, causing imports to rise. Others feel that the higher support price set by the Chinese government to bolster production is creating an incentive for local traders to import rice from Vietnam, India, and Pakistan. Whatever the reason, it is difficult to predict what China will do in the future. But, one thing is clear: the Chinese government
is in a mood to bolster stockpiles and allow imported rice to enter the country
to keep domestic prices in check.

In addition to rice, China’s corn (maize) imports also skyrocketed in 2012 to 5 million tons—a 500% rise from its 1 million tons of imports in 2011. Many believe that the time has come for China to relax its policy of 95% self-sufficiency in cereals similar to what they did with soybeans and cotton more than a decade ago. China now imports 60 million tons of soybeans and 25 million bales of cotton, accounting for 62% and 55% of the global market, respectively. It is difficult to visualize how the global rice market will transform itself if China decides to give up on rice self-sufficiency and emerge as a growing importer of rice. But, I believe that China is not ready to open up its food grain (rice and wheat) imports but may be leaning toward liberalizing corn imports in the near term to meet the rising demand from the poultry and pig sectors.

As we look ahead, rice prices are likely to be range-bound in the next few months, with plenty of rice for sale from India, Vietnam, Thailand, and Pakistan. The dryseason rice crop looks good in most countries, except India. The country’s initial estimates by the Ministry of Agriculture suggest an 11% decline in rice area from 3.25 million hectares in 2012 to 2.9 million hectares this year because of shifting to oilseeds and pulses in some areas. But, this is unlikely to cause any problems as India’s rice procurement stocks remain in excess of 30 million tons. This is more than twice what the government has prescribed as the desired buffer norm and strategic reserve.

However, India will be cautious of the volume of rice it exports in 2013 as it implements the provisions of the National Food Security Bill ahead of the general election in 2014. This bill plans to significantly expand the current food subsidy program to include more than half of India’s billion-plus population.

Unlike India, Thailand is keen to offload part of its 15 million tons of mortgage stocks in the next few months to make room for new crops. Unfortunately, at this moment, Thai rice is not competitive in the market as the quoted prices are nearly 40% higher than rice with comparable quality from India and Vietnam. But, if the Thai government aggressively prices the mortgage stocks, then prices may decline in the near term. Even the continuation of China’s imports is unlikely to provide much upward push on prices.

The monsoon holds the key to what will happen to rice prices in the second half of the year. The market is well positioned to handle isolated incidences of extreme weather. But, a bad monsoon (too much or too little rain) in the major rice-growing regions may spell doom for the market and push prices higher.

Dr. Sam Mohanty is the head of the Social Sciences Division at the International Rice Research Institute.