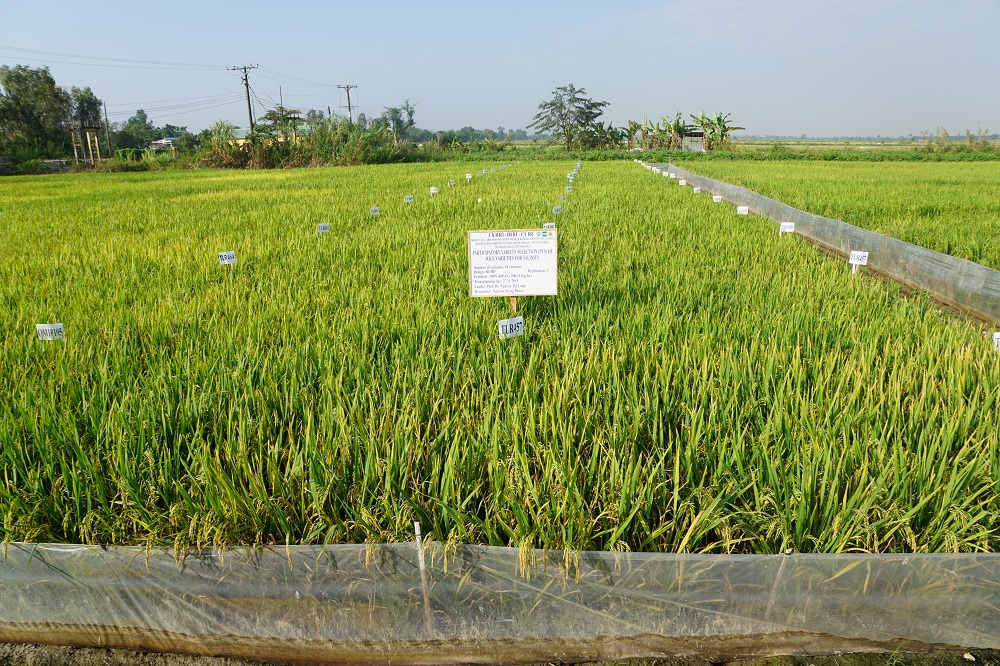 The major constraints in agricultural production in the Mekong Delta are stagnant yields in irrigated lowlands, biotic stresses (such as sheath blight, blast, bacterial blight, brown planthopper, stem borer, thrips, and leaf-folder), abiotic stresses (such as acid sulfate soils, salinity, drought, and heat), the lack of varieties resistant to biotic and abiotic stresses, low yield in hybrid rice, too few parental lines for developing hybrids, too few heterotic hybrids suited to both the Red River and Mekong River Deltas, and poor grain quality of inbreds and hybrids. Worse, more rice areas have been converted to nonagricultural use each year. Rapid urbanization, industrialization, and demographic pressure have led farmers to use their marginal land for increased rice production to meet their family’s needs. With this, acid soils, tidal land, and forest land have been reclaimed and brought under cultivation, thereby limiting crop yield potential. In intensive irrigated rice-farming systems, major soil problems have included soil-mining effects and soil pollution.

It is within this context that scientists from the Cuu Long Delta Rice Research Institute (CLDRRI), Institute of Agricultural Sciences for Southern Vietnam, and International Rice Research Institute are breeding rice varieties with submergence tolerance (ST) and stagnant flooding (SF) tolerance. Fourteen submergence-tolerant and high-yielding genotypes along with two standard checks plus a farmers’ variety were evaluated in a trial under naturally occurring submerged conditions.

Different traits were assessed (crop duration, plant height, the number of filled grains per panicle, percentage sterility, and other quality traits as well as submergence tolerance). Lines that are early maturing (90‒110 days), semi-dwarf (90 to 110 cm), with a medium number of panicles per hill (7 to 15), and with a high number of grains per panicle (77 to 199) are selected for further testing in the rice-rice cropping pattern when their submergence tolerance is high (survival after 20 to 25 days of submergence with 0.8 to 1 m water depth) and when duration reaches 98 days, similar to IR42. The experiment suggested that the lines IR64-Sub1 and Pana were suitable for submergence.

On-station evaluation of the genotypes under controlled medium stagnant flooding was conducted. The 14 genotypes were evaluated along with the standard check variety, IR64-Sub1. They were grown at the CLDRRI for screening against natural medium stagnant floods. To evaluate performance stability, the 14 indica rice varieties were tested in different locations during the wet and dry seasons of 2014-15, using a randomized block design with three replications in each case. The experiment was conducted in the provinces of Bac Lieu, Can Tho, Hau Giang, Dong Thap, Vinh Long, and An Giang. The highest grain yield across the six sites was obtained from IR64-Sub 1 during the dry season. To reach poor farmers suffering from salt tolerance and likely to suffer losses in the future, a seed supply and the conversion of additional varieties to submergence-tolerant ones had to be achieved urgently.

Seeds were provided, as follows, to these provinces:

A training course for farmers and technicians was conducted during 2014-15 with 330 farmers (252 males and 78 females) coming from An Giang, Can Tho, Bac Lieu, and Hau Giang provinces. In 2015, two workshops were conducted to discuss lessons and other useful information generated from the project. Rewards for local staff who participated in the project were also given The survey and evaluation done by the CLDRRI brought about the following: improvement of 75 lines/elite rice varieties (ready for application for production); national testing of three rice varieties in two seasons; three rice variety candidates for national testing; and one rice variety candidate for DUS testing. In addition, several important characteristics were analyzed. The stability of rice varieties was also identified through the analysis of genotype by environment interactions.

These results are expected to contribute to breeding improvement of the gene pool and to increase rice exports from the Mekong Delta. This should help boost Vietnam’s competitive advantage in rice production in the region, especially since these rice varieties are considered good materials not only for the Mekong Delta but also for rice production programs in the central and southern provinces.