In the 1950s, Asia is on the brink of famine. Food is scarce and millions of people are in danger of suffering from starvation. So, in 1960, IRRI was established with an urgent mission to develop a high-yielding rice variety. On 28 November 1966, IRRI released IR8, a rice variety dubbed by the media as the “miracle rice.” Ultimately, this first effective semidwarf variety would indeed change the food situation in Asia and beyond, kicking off what we now call the “first” Green Revolution. 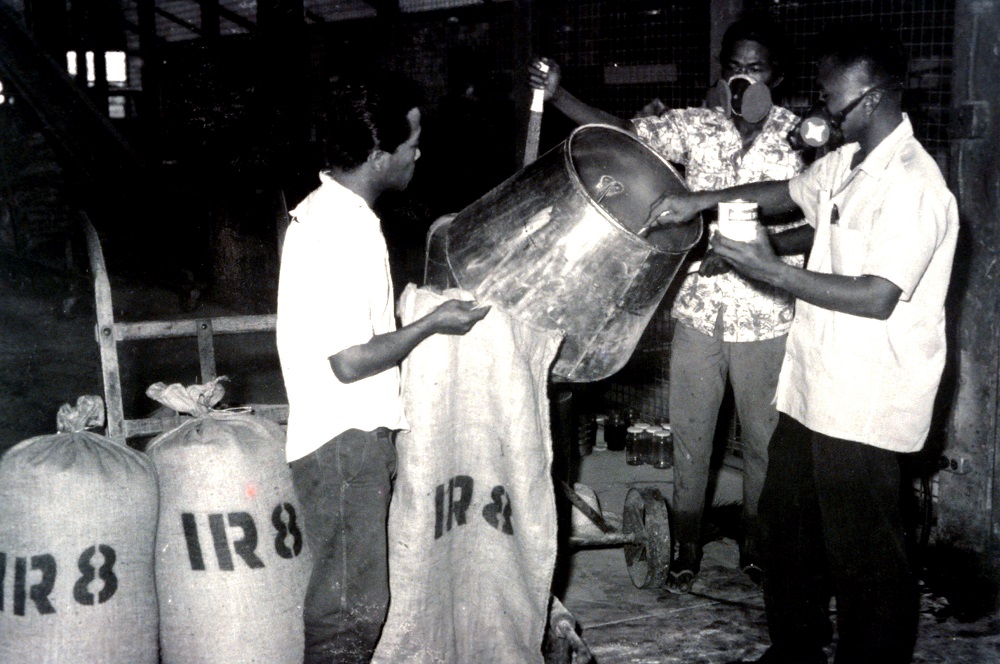 IR8 seeds are being packed for distribution to farmers in the Philippines in the 1960s. (Photo: IRRI)

.
1962
IRRI breeder Peter Jennings and his team make crosses using various dwarf and tall rice varieties as parents, one of which is between Dee-geo-woo-gen (DGWG), a dwarf variety from Taiwan, and Peta, a tall variety from Indonesia.

1963
In the segregating F2 populations coming from the 1962 crosses, Jennings discovers the existence of a single recessive gene for shortness (later to be called sd-1).

1964
From the F4 generation of the Peta×DGWG cross, IRRI breeder Hank Beachell selects a single plant and designates it as IR8-288-3.

1965
The first cooperative trials of IR8-288-3 and other promising lines are conducted in the Philippines, Hong Kong, Malaysia, Thailand, and Taiwan.

28 November:
IRRI announces the official release of IR8 as its first rice variety. As the prototype for future modern rice varieties, IR8 is credited with jumpstarting the Green Revolution in rice.

1967: In India, Mr. Nekkanti Subba Rao, a progressive farmer in Andhra Pradesh, tests IR8 on his farm to demonstrate its high yield potential to neighboring farmers.

In subsequent years, IR8 is called Magyaw in Burma, Padi Ria in Malaysia, Peta Baru 8 in Indonesia, Lua Honda in Vietnam, and Milagro Filipino in Mexico.

More on IR8 and its rich history:

Breeding history
A remarkable rice-breeding project culminated in the release of a rice variety under an unremarkable name—IR8.  This is the story of the research that would ultimately change the face of agriculture across Asia.

Luck is the residue of design
Peter Jennings, the International Rice Research Institute’s first rice breeder (1961-67), with a long career in Latin America after his work in Asia, kicks off this historic series with a singular wit. He played a major role in the development of IR8, the rice variety that would ultimately change the face of agriculture across Asia.

Rice revolutions in Latin America
In 1962, scientists at the International Rice Research Institute (IRRI) debated the cause of low and stagnant rice yields in the tropics: was it variety or crop management? This debate ended with the release of the semidwarf IR8 in 1966, initiating the Green Revolution. The same variety, in the same year, extended this revolution to Latin America, beginning in Colombia and spreading rapidly through the tropics and later to the temperate areas.

Rice revival in the land of maize
The worldwide Green Revolution in rice greatly boosted the production of the crop in Mexico, starting in the 1960s. Impressed with the high yields of IR8—the world’s first modern semidwarf rice—growers quickly embraced the new variety, which had resulted from the work of Peter Jennings and others at the International Rice Research Institute (IRRI). Known in Mexico as Milagro Filipino or “Philippine Miracle,” it is still the country’s most widely grown rice variety.

Indian farmer kick-starts two green revolutions
In 1967, Mr. Subba Rao tested IR8 on his farm and supervised its first large-scale demonstration and multiplication—on about 2,000 hectares near his home village of Atchanta—following instructions from the government of India. The next year, IR8 was planted on 1,600 hectares in his village and the rest was history, with the seeds soon being distributed throughout the country. So, in addition to being called Dhaan Pandit (rice expert) by his neighbors, he is also known by the moniker “Mr. IR8,” which still resonates with many Indian farmers to this day.

Celebrating IR8: U.S. President Johnson makes historic visit to IRRI with stirring words
Braving the mud, LBJ went out into a rice plot to inspect the variety that was making so much of a stir in the media. IRRI Director General Robert Chandler, Jr. briefed LBJ and Philippine President Ferdinand Marcos, explaining the importance of semidwarfness in the new variety. LBJ then came up out of the field and, under a hot blazing sun just before 1 p.m., he delivered an inspiring speech to the awaiting crowd of IRRI staff members and other visitors. The U.S. president was an accomplished orator and at his best that day. He concluded, speaking of IRRI, with the words, “You are pointing the way for all of Asia to follow and I hope they are looking. I hope they are listening. And I hope they are following.”

The brains and brawn behind IR8
The people with different personalities, backgrounds, specializations, and abilities who were drawn together to create a historic synergy that produced a milestone solution to the challenging problem of feeding the world.