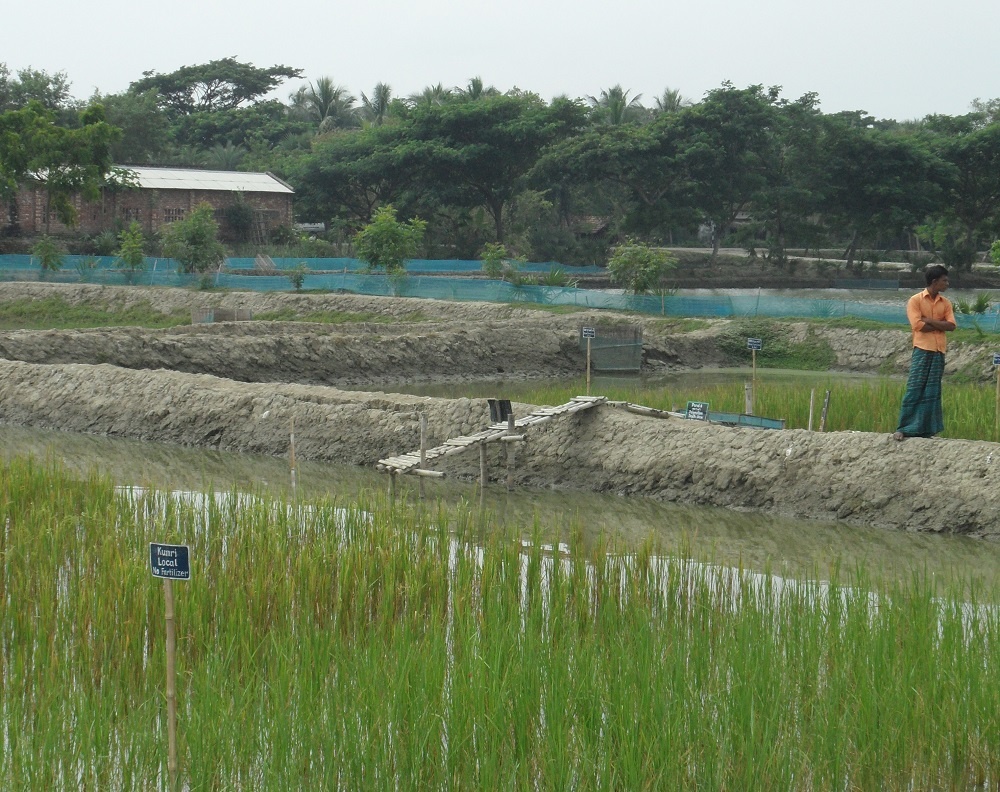 .
Rice is the second-highest produced cereal in terms of harvested yield after maize and is a staple food for about four billion people globally. Currently, Bangladesh ranks as the fourth largest rice producer in the world and its production has increased by 3.5-folds from 1971 to 2017.

Climate change and spatial variations in biophysical and socioeconomic resources, however, continuously challenge rice production in Bangladesh and in the world at large. Bangladesh’s agricultural landscape is quite distinct, with the northern zone characterized by highly intensified farming integrated with advanced technologies, while the southern coastal zone is one of the least productive and intensified regions.

As a result, the southern coastal zone has significantly higher food insecurity and malnutrition and is also highly prone to climate change. In the southern coastal zone, about 1.2 million hectares of land is surrounded by embankments that protect agricultural lands against tidal floods, salinity intrusion, and sedimentation from the main river systems and are referred to as “polders.”

All polders (139 in total) in the coastal zone have embankments and multiple sluice gates, which help in regulating in and outflow of water in each polder. The main reasons for the low cropping intensity and productivity in the polders are waterlogging caused by tidal river fluctuations and rainfall during the wet season, the historical practice of growing long-duration traditional rice varieties, a late harvest of wet season rice (aman), and lack of readily accessible freshwater for irrigation and salinity during the dry season (rabi).

Soil salinity in the coastal regions of Bangladesh has also been discussed extensively as a dominant factor affecting dry season crop productivity. The late establishment of dry season crops leads to crop damage from salinity but often also from pre-monsoon rains and cyclones in April-May.

Specifically, water governance could lead to the rapid adoption of improved high-yielding rice varieties in the wet season, which could be complemented with more diversity among dry season crops. Overall, cropping intensity and productivity has the potential to raise farm income in the region beyond subsistence. There are tremendous opportunities to improve the water-environment to capitalize on polder ecosystem services, especially engaging the tidal river dynamics, dense canal networks, water management infrastructure, and community water management organizations to increase and sustain land productivity.

The water management can be optimized by systematic operation of sluice gates installed in the polder embankment by aligning with the high and low tides in the rivers and synchronized cropping involving the community. The main cropping system in polders is the traditional rice-fallow. Some farmers grow traditional sesame and mungbean in the dry season, but the crops are partly or fully damaged by waterlogging due to pre-monsoon rains and cyclones.

Many research experiments conducted at the plot scale have highlighted the potential to increase cropping intensity by 200–300%, with a system rice equivalent yield ranging between 13 tons/ ha and 31 tons/ ha.

However, these studies have not factored-in spatial variabilities and hence have limited information documented on yield gaps, stability, and resilience of the system with improved technological solutions.

The spatiotemporal performance of a crop or a cropping system is a relative measure of stability and resilience of a system and measures the plasticity of a system in maintaining a certain level of performance across various environmental and socioeconomic conditions.

The spatial and temporal stability of a cropping system will be further challenged by climate change. An alternative way of measuring a system spatiotemporal stability and validation of simulation outcomes is by analyzing the relative performance of an improved system compared with existing systems, across a wide range of environments. Hence, the objectives of this research were to

The yield stability of high-yielding and high-value dry season crops depends mainly on the distribution and amount of rainfall, especially in March and April.

The improved rice-based cropping system bridges the yield gap to meet the food security issues associated with increasing population and changing climate. Besides yield and profit as performance indicators, cropping systems evaluation should include environmental impacts, compatibility of rotation crops, and ease of production based on the cropping calendar to support sustainable agricultural intensification in the polders.

In addition, a better understanding of trade-offs and synergies between productivity, economics, environment, social, and human conditions can provide targeted opportunities for scaling key findings from this study.