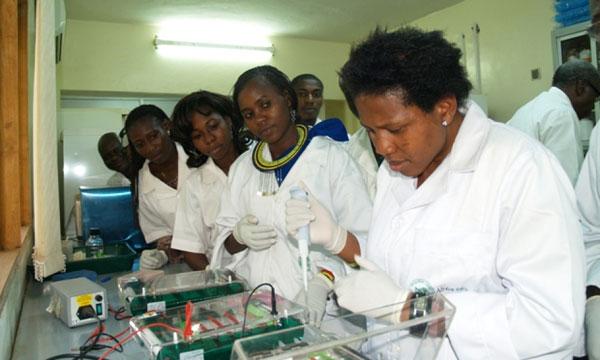 International and national rice pathologists, who gathered recently for a training workshop in Burundi, were surprised to find symptoms of an important rice disease called bacterial leaf streak during their field visit. “The presence of bacterial leaf streak of rice was never reported before in this East African country,” said Drissa Silué, senior pathologist at the Africa Rice Center (AfricaRice).

His team has also recently detected the symptoms of bacterial sheath rot of rice for the first time in Senegal in West Africa. “Farmers in northern Senegal were desperate as their rice crop was being devastated by this ‘mysterious’ disease and asked us for help,” said Ms. Afolabi Oluwatoyin Oluwakemi, research assistant in the AfricaRice Plant Pathology Unit, who visited the farmers’ fields to examine the problem and collect samples.

“These are seedborne diseases,” remarked Dr. Silué. “Although we cannot rule out climate change as one of the factors. We are testing them further to identify disease-resistant rice varieties and management practices, which can be recommended to farmers.”

Plant diseases and pests are strongly influenced by changing weather patterns in the same way that many infectious diseases of humans and animals are climate-sensitive. The relationship between weather and diseases has long been recognized, but the reality of climate change has now added a new complexity. Researchers are seeking to better understand the relationship between climate and disease occurence and patterns to forecast disease outbreaks and develop control strategies.

With warming occurring in some regions, experts think that changes in temperature, rainfall patterns, and extreme events could exacerbate the spread of some crop diseases and alter the pest-plant relationship. For example, symptoms of brown spot and narrow brown leaf spot are now increasingly seen in farmers’ fields in West and East Africa. Dr. Silué wonders if climate change is responsible for this.

Unknown and unexpected crop disease occurrences, such as the ones mentioned above, are projected to increase and some minor diseases may become major problems in areas where they were previously insignificant. A case in point is sheath blight of rice, which had been a minor disease in Asia, but is now a serious problem.

Such changes have potentially serious implications for food security. The negative impacts of climate change are also aggravated by poverty and population explosions still occurring in some developing countries.

Scientists in Africa are working toward developing rice varieties with resistance to diseases such as blast. (Photo: R. Raman, AfricaRice)

“To date, little research has been done focusing on Africa regarding the potential consequences of global warming on agriculture,” said Dr. Paul Kiepe, AfricaRice regional representative for Eastern and Southern Africa and focal point for the CGIAR Research Program on Climate Change, Agriculture, and Food Security (CCAFS).

The project is supported by the German Federal Ministry for Economic Cooperation and Development and German International Cooperation. Complementary funds from CCAFS are used to support climate change related activities.

It covers three countries in the Great Lakes region: Uganda, Rwanda, and Tanzania. According to the Intergovernmental Panel on Climate Change, this is one of the regions in Africa that are most vulnerable to climate change.

“Focusing on East Africa is necessary because information on rice diseases here is very scarce,” said Dr. Yacouba Séré, former AfricaRice plant pathologist, who has designed and partly managed the project. “The effect of climate change on rice disease propagation and severity is not well known. This project will hopefully close the knowledge gap through strategic and applied research.”

Project researchers are mapping and quantifying the impact of climate change on rice yield loss due to two important rice diseases prevalent in the region—bacterial leaf blight and blast. They are also investigating rice-pathogen interactions under different climate scenarios and identifying resistance genes. Researchers are also exploiting farmers’ indigenous knowledge of local rice diseases and any climate change experiences farmers may have already observed.

Project results will allow plant pathologists and breeders to determine what these pathogen strains are, where and when they occur, and if climate change has any effects on their severity. Eventually, this will lead to the development of regional varieties resistant to these strains of blast and bacterial leaf blight and concomitant management practices with climate change in mind.

Once the team identifies effective genes with resistance to these diseases, they will be transferred through marker-assisted selection into high-yielding mega varieties currently grown by the farmers.

The project team is also strengthening the capacity of national partners in disease monitoring, bacterial disease diagnosis, pathogen analysis, simulation modeling, and matching of pathogens with resistance genes. For farmers, the team has organized training to show them how to assess injuries caused by diseases, animal pests, and weeds.

Six MSc and three PhD students, who are actively involved in the project’s activities, will be contributing scientific papers on the effects of climate change on the pathogenicity of these two diseases and on the region’s rice production.

The project team has assessed the extent of bacterial leaf blight and blast disease problems in the three countries and has obtained some basic information on pathogen distribution and diversity. Initial results indicate that the Pi9 gene is effective against blast populations tested so far.

The researchers have checked rice disease-inflicted yield losses under various climate conditions using a combination of simulation models (RICEPEST and EPIRICE) and climatic data in Tanzania, Uganda, and Rwanda. Preliminary results show that, in Tanzania, yield losses caused by bacterial leaf blight significantly increased under all climate scenarios studied. Blast, on the other hand, is predicted to have an insignificant effect on yield under the same scenarios. The simulation for Rwanda and Uganda is ongoing.

These results are being validated using field data and will be available through a public-accessible Web-based mapping application.

According to Dr. Kiepe, these efforts to study climate-change impacts on rice and the resulting adaptation and mitigation strategies will create a range of solutions to help build climate-resilient food systems that will significantly increase Africa’s food security.

Ms. Savitri Mohapatra is the head of Marketing and Communications at AfricaRice.