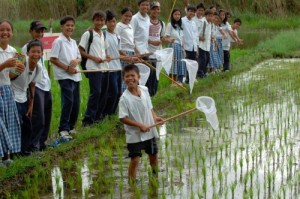 High school students at the Binulasan Integrated School in Quezon, Philippines, are all smiles during a hands-on exercise on pest management in their school’s rice paddy. (Photo: Jose Raymond Panaligan)

“Farmers are getting older and older. When they are gone, who will produce the food? Few farmers today want their children to become farmers or even agriculturists. The farmer will just say: there is no future in this for my child.”

This is the bleak reality, as explained by Father Francis B. Lucas, president of the Infanta Integrated Community Development Assistance, Inc. (ICDAI), a community-based nongovernmental organization (NGO) in Infanta, in the Philippine province of Quezon.

In 2007, ICDAI, in partnership with the Philippine Rice Research Institute (PhilRice) and the International Rice Research Institute (IRRI), launched the Youth Field School (YFS) as part of the PhilRice-IRRI project on “Improving knowledge exchange and decision making among rice stakeholders through information-and-communication-based technology promotion and delivery systems,” better known as the PhilRice-IRRI Cyber Village project.

The project, which started in 2006 and is scheduled to finish in 2008, tests and develops approaches that deal with the range of problems faced by farmers. It then takes these approaches and makes them more widely known at the village and municipal levels through the use of information and communication technology (ICT).

The project also looks into the effectiveness of computer-based information and knowledge dissemination to rural farmers and extension workers (who take technology and training to farmers).

In Infanta, one of the project’s pilot sites, the YFS was an off-shoot of ICDAI’s long-running program, the Farmers’ Field School, which started in the 1980s. In these schools, a team of agriculturists and farmer-trainers gave training courses and workshops on ecological pest management, integrated soil management, livestock training, and other agricultural services in villages and towns upon request of organized farmer groups. The Farmers’ Field School was a tremendous success; however, through the years, fewer and fewer farmers attended, so ICDAI developed another strategy—the Youth Field School—wherein the transfer of agricultural technology was delivered not to farmers but to their children.

“Seventy percent of the population of Infanta is below 21 years old. Why are we teaching only the farmers and not their children?” asks Father Lucas. “The technology taught to the older generation will die with it—and not only the technology, but the wonder in appreciating the source of life: its food and agriculture.”

“We wanted to start the students early in agriculture,” he says, “so the Grade 6 student can say: ‘Wow! Farming is a global pursuit! We are connected nationally and internationally!’ We want them to see that agriculture is not only about their own farms, it’s a global issue. These children do not even know how many people in the world eat rice. Hopefully, with the YFS, they would want to become farmers.”

Che-Che Morilla, head of ICDAI’s sustainable agriculture program, which handles the YFS, explains, “We just want the students to appreciate the farming activities, to love the farmers, their parents who are farmers. We are also very happy that these students are helping us by teaching their families. In effect, they become very extensionists—very effective trainers for their families.”