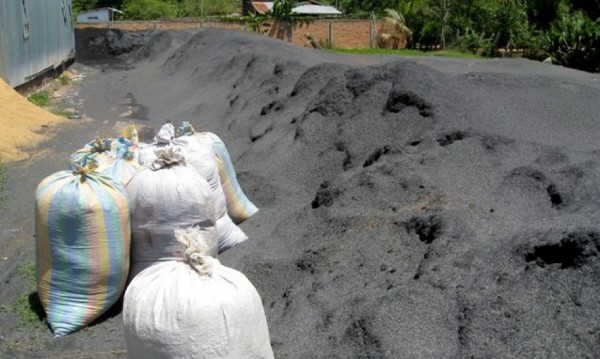 Farmers typically grow two or three crops a year. Since they don’t have enough turnaround time before beginning the next planting season, they resort to the quickest and easiest solution to get rid of the rice “waste,” that is, the residue—by burning. This releases methane, a greenhouse gas that remains in the atmosphere for 9–15 years and contributes to global warming. On top of this, exposure to smoke and soot causes respiratory problems among farmers and townspeople alike.

Waste not, want not
“Rice straw and husks offer an immense potential to create bioenergy, an alternative renewable source of power,” said Dr. Stephan Stephan Haefele, senior researcher at the International Rice Research Institute (IRRI). He and his scientific team have been exploring ways to turn rice residues into useful and valuable by-products to support more efficient, productive, profitable, and sustainable rice farms. 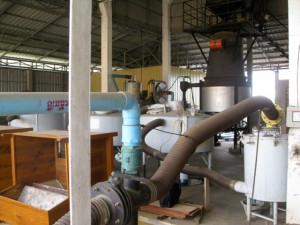 Gasifier systems could provide a cleaner, greener way to harness the energy potential of rice husks in the future. (Photo: Stepan Haefele)

“Rice residues can produce bioenergy and at the same time reduce the negative effects of rice production systems on the environment; they could also be a source of extra income for farmers,” said Dr. Haefele.

Moreover, rice residues and production systems have several decisive advantages over many other bioenergy crops, he explained. Unlike crops grown exclusively for biofuels, using rice residues to generate energy would not divert land use away from food production. It has also been shown that, even if all rice residues are removed, the quality of rice soils is unaffected. Residue removal for energy production directly reduces the emissions of greenhouse gases caused by field burning or by residue incorporation into the soil. Also, the high cropping intensity in irrigated rice systems ensures a constant residue supply and keeps transportation time to processing centers short.

Backyard fuel
In 2011, Dr. Haefele and his collaborators analyzed the energy and carbon life-cycle of existing gasifiers that turn rice residues, without burning them, into gases that can be used as an energy source. Such gasifiers are increasingly common in Cambodia, where rice millers want to make use of the husks that pile up in their backyards.

Each ton of husk gasified can save about 1 ton of greenhouse gas emissions (CO2) compared to current uses. The energy needed to build and operate a gasifier was produced by the gasifier within 245 days of operation. And, it took only 109 days of gasifier operation to save as much carbon as was emitted to build and establish it. Looking at the rice production system, a 1-hectare irrigated rice field can produce 12 tons of husk and straw per year, which can be converted to clean energy in a medium-sized gasifier equivalent to about 1,800 liters of diesel.

More power to farmers
“These results show the potential of residues as an energy source, and as an option to make rice cultivation even more sustainable,” said Dr. Haefele.

“We now intend to investigate rice straw. Quite a lot of research has been done on rice husks but little is known about the use of rice straw. We will try to answer how best to collect straw, how to store it, and whether pretreatments, such as leaching, drying, and/or briquetting, are necessary.

“For the most promising systems, we plan to conduct a life-cycle analysis and to develop complete business models,” he added. “We are also testing what effects biochar—a by-product from straw and husk burning—has on soil quality in various rice production systems, and determine its optimal uses and look at how to participate in emerging carbon markets.

Ms. Ferrer is a public relations specialist at IRRI.