Self-financed farmer cooperatives are a viable strategy to increase irrigated rice area to attain a national yield average of six tons per hectare. 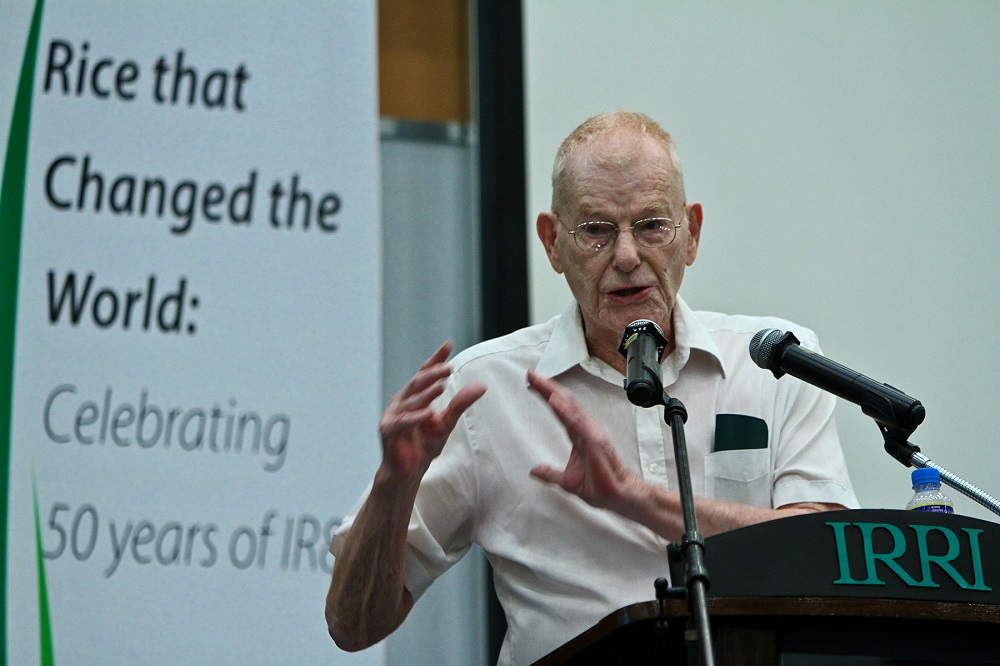 Dr. Jennings is senior scientist emeritus at IRRI, who led the team that bred IR8 in the early 1960s. (Photo by Isagani Serrano, IRRI)

While these remarks are specific to the Philippines, they equally apply to all countries currently mired at an average yield of some 4 tons per hectare. Whereas high-yielding varieties emanating from the International Rice Research Institute (IRRI) had a sudden and large impact beginning in the mid-1960s, yield improvement in subsequent decades has come largely from farmer initiatives with little contribution from research. The increase in yield to something over 2 tons per hectare attributed to IR8 (see IR8—a rice variety for the ages) and subsequent semidwarf varieties is well known.

Less appreciated is the investment of extra income from these varieties by farmers in water control from low-yield, high-risk ecologies to higher-yield, lower-risk irrigated rice from the 1970s to the present. This slow transition to roughly 50% of irrigated farms today is the major contributor to the increase in yield from about 2 to 4 tons per hectare today.

Farmers’ appreciation that water control is essential for profitable rice farming clearly defines future needs. The shift to water control can be accelerated to reach a goal of 80-90% irrigated farming. That alone would guarantee a national yield of 6 tons per hectare. The strategy proposed to achieve this implies that progress will come more from the farmers’ initiatives than from the researchers.

To reach an average of 6 tons per hectare, farmers require many improvements including better farm-to-market roads, modernized rice mills, earthen dams to capture rainwater where topography permits, credit for tube wells and low-lift pumps, subsidies to reduce electricity costs to run the pumps, and a massive increase in extension agents trained to simultaneously reduce the multiple deficiencies in crop management that constrain yield.

These extremely expensive requirements are unlikely to be met from government coffers. Capital from the farmers and millers is a better alternative. To generate this, the Philippine Secretary of Agriculture would identify one or two rice areas easiest to impact. His staff would select in each area a highly respected farm leader competent in the management of people and finance.

The selected farmer would visit all the barrios in his or her area to convince farmers and millers to join a cooperative and accept obligatory taxes of a few centavos on each kilo of grain harvested and milled output. Money collected at the mills would create the capital for investment in irrigation and other farm requirements. Matching funds would be sought from international banks, foundations, and other sources. The cooperative would invest in farm needs with the guidance of a board of elected farmers and millers. Success in the pilot areas would be extended to the rest of the country through the creation of additional farmer organizations.

This proposal will be difficult to implement, opposed by vested interests, and subject to financial mismanagement. Yet, self-financed farmer cooperatives are a viable strategy to increase irrigated rice area to attain a national yield average of 6 tons per hectare.
__________________
Dr. Jennings is senior scientist emeritus at IRRI, who led the team that bred IR8 in the early 1960s.