It was 50 years ago this 28 November that the International Rice Research Institute (IRRI) released a rice variety, under the nondescript name IR8. However, it would soon be dubbed by the media as the “miracle rice” that poor farmers, especially in Asia, were hoping for because the continent was desperate for food after World War II. And rice was—and is—Asia’s lifeblood. Ultimately, this first widely planted semidwarf variety would indeed change the food situation in Asia and beyond, kicking off what we now call today the “first” Green Revolution. 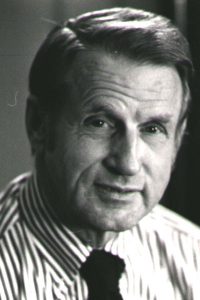 Robert F. Chandler, IRRI’s first director, in 1960, assembled a team of scientists with a singular mission—to develop high-yielding rice varieties. They knew that the architecture of the tropical rice plant was the main constraint to any significant yield increase. Traditional rice varieties are tall, with long, weak stems. When a farmer fertilizes a tall plant, it “lodges,” or falls over. So, they needed to create a shorter rice plant!

Only 3 years later, in July 1963, IRRI’s first breeder, Peter Jennings, was making his routine visit to the experimental rice plots on the institute’s research farm. That particular morning, it was goosebump time! He was walking a plot of F2 (second-generation) rice plants, derived from a small set of 38 crosses, he and colleagues had made earlier. Some of these crosses involved three dwarf rice varieties from Taiwan, China (Dee-geo-woo-gen [DGWG], Taichung Native 1, and I-geo-tze) and Peta, a tall, vigorous variety from Indonesia. As he told me during his 2007 Pioneer Interview, he had that day what he called “his epiphany.” 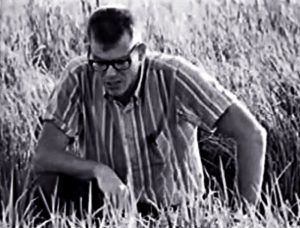 He observed tall plants and short plants in a ratio of 3:1—classic Mendelian inheritance—indicating that he was observing the action of a single recessive gene for shortness (later to be called sd-1). Well, the rest is history as selections from the DGWG x Peta cross in later generations ultimately resulted in IR8. This new semidwarf was about 120 cm tall with strong stems that held the plant upright, even when heavily fertilized. It was also nonsensitive to photoperiod, or day length, which meant it could be grown at many latitudes around the world, at any time of the year. It would be the precursor of most succeeding improved modern rice varieties. 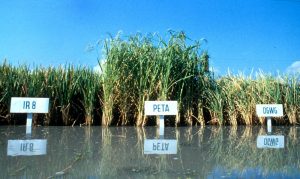 It was incredible that, in just 6 short years after IRRI’s founding, the breeders were able to come up with a rice variety, from the 8th cross (Dee-geo-woo-gen x Peta; photo left) of only 38 crosses made, as impactful as IR8 so quickly. The number of crosses was ridiculously low by today’s standards and they didn’t have the array of breeding tools then that IRRI’s modern breeding factory has today, such as marker technology, multilocation trials, and rapid generation advance. Dr. Jennings attributed IRRI’s success—perhaps more in his day than now—to mixing luck with science.

2016 is also the golden anniversary of the historic visit to IRRI of Lyndon Johnson, the first and only U.S. president to come to the institute. He arrived on 26 October 1966 and gave a rousing speech after inspecting IR8 in the field plots. He closed his remarks, speaking of IRRI, “you are leading the way for all of Asia to follow.”

US President Lyndon Johnson at IRRI.

IR8 made an immediate impact in many Asian countries, Vietnam being a shining example. IR8’s official name in Vietnam was Lua Than Nong, or Rice of the Farming God. But Vietnamese farmers quickly dubbed IR8 Lua Honda—or Honda Rice—because one good crop brought in enough extra income to buy a new motorbike. 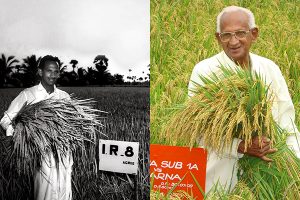 Of course, IR8 also made a great impact in staving off famine in India. In 1967, master farmer Nekkanti Subba Rao , near his village in the state of Andhra Pradesh, tested IR8 on his farm and supervised its first large-scale demonstration and multiplication for other farmers. The next year, IR8 seeds were distributed throughout the country. So, in addition to being called Dhaan Pandit (rice expert) by his neighbors, he is also known, to this day, by the moniker “Mr. IR8.” His story is a fascinating tale about his role in both the 1st and 2nd Green Revolutions in India.

Starting during the same year that IR8 was officially released to farmers in the Philippines, loop surveys—the longest duration farm surveys known to be in existence—have been conducted during the wet and dry seasons every 4 to 5 years in the country’s Central Luzon region. The data from 50 years of tracking farming changes in the Philippine rice granary have revealed some interesting trends in rice farming and farm practices, including the fact that farms have been and remain small, approximately 2 hectares.

We most often hear about the impact that IR8 had in Asia. However, few are aware that it, also in 1966, extended the 1st Green Revolution to Latin America. It began in Colombia and spread rapidly through that continent’s tropics and later to its temperate areas. However, Peter Jennings has some interesting insights about the rice revolutions in Latin America that started with IR8, “but,” as he puts forth, “ended on individual farms after the first harvest.”

Also in Latin America, impressed with the high yields of IR8—Mexican farmers quickly embraced the new variety. Known in Mexico as Milagro Filipino or “Philippine Miracle,” it is—incredibly—still the country’s most widely grown rice variety.

The first Green Revolution produced IR8 and its successor rice varieties for irrigated fields that were highly responsive to fertilizer, a major reason for achieving the phenomenally high yields. And as we know, they spread rapidly across the rice-growing regions, including rainfed areas. However, these varieties often break down when abiotic stresses occur in the unfavorable environments. So, IRRI and partners are developing stress-tolerant, high-yielding rice varieties designed specifically for the rainfed areas, and now, more than ever before, there is a link between rice genes and rice farmers.

Perhaps another significant contribution of IR8 is that it started an enduring and thriving collaboration among IRRI and national rice research programs around the world. Indeed, the definitive measure of IRRl’s success has been the adoption of evolving breeding and agronomic methods, tools, and techniques—and the resulting products—by national programs through their partnership with the Institute.