Loop surveys were conducted in the wet and dry season every four to five years from 1966-67 to 2011-12—the longest farm surveys in existence—in which detailed records were kept on production systems and family activities. This article discusses a survey of about 100 farmers in Central Luzon, Philippines (map). The route of the survey forms a “loop” along the national highways in the region. 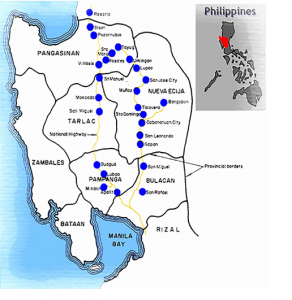 Loop surveys were conducted in the wet and dry season every four to five years from 1966-67 to 2011-12 of about 100 farmers in Central Luzon, Philippines.

A major objective of the loop surveys, now marking their 50th anniversary in 2016, has been to provide feedback to rice scientists and others about changes in farming and farm practices in Central Luzon—the “backyard” of the International Rice Research Institute (IRRI). The survey has also included information on farm families and sources of family income. It raises questions regarding the future of rice farming in the so-called “rice granary of the Philippines” as families have come to rely on nonfarm sources of income.

The farms have been and remain small, approximately 2 hectares. The families have been large, on average six members per household. The completion of the Pantabangan Dam in 1975 and the establishment of the Upper Pampanga Integrated Irrigation System represented the first major irrigation project in the region. The adoption of low-lift pumps and shallow tubewells from the 1990s onward have allowed farms to intensify. Irrigation expansion was essential for the Green Revolution to be successful. 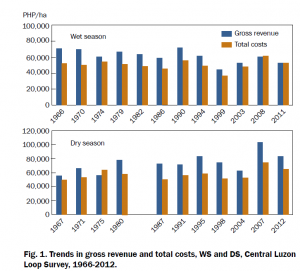 Profitability of rice farming—who benefits more?
We typically find in technological innovations in agriculture that falling prices (Fig. 1) more than offset higher yields (Fig. 2)—the larger portion of benefits going to consumers (consumer surplus), not to producers (producer surplus). But, other changes need to be taken into account over time such as land reform and falling land rents, mechanization, and the reduction in labor inputs. 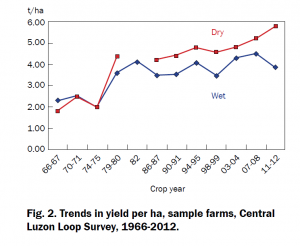 The situation for the wet season is very different. Both net returns and net profit have been declining over almost the entire five decades. The net returns over paid-out costs are positive, but, in the last two survey years, net profit has been zero. This has been accompanied by a decline in area planted to rice in the wet season among our survey farmers.

Briefly, in the 1960s and 1970s, around 70% of family income was from rice production. By the 1980s and 1990s, rice represented only a third of family income, with other farm and nonfarm activities accounting for the rest. By the 2000s, income from rice accounted for less than 20% and from remittances over a quarter of family income.

However, with hired laborers, the production of rice continued. As noted earlier, land planted to rice in the wet season was declining somewhat but was offset by increasing yields in the dry season with the expanding use of low-lift pumps for irrigation. There were no signs of an active land market as the majority of farmers were happy to have benefited from the agrarian reform and they had become landowners.

Conclusions and implications
We would like to conclude with some implications for the future path of development in the Philippines’ rice sector. There is much discussion in the literature about the need for Asian economies to expand farm size to take advantage of the scale economies of large mechanization. However, this transition must be accompanied by rising wage rates and an active land market. Slow industrial development, rapid population growth, and prolonged land reform have slowed down this transition in the Philippines so far.

Since 2010, the economy has been growing rapidly and, if this growth is pro-poor and raises the wage rates of agricultural laborers, the incentive for mechanization will increase. However, the process may not work smoothly as long as the land market is still inactive. We have to pay attention to how recent economic growth would lead to further mechanization.

Declining profitability in the wet season is another crucial issue. The percentage of GDP from agriculture and the percentage of GDP from remittances of overseas workers are both about 10%. The Philippines has been importing rice and exporting labor. Research on sustainable rice production in agro-ecologically unfavorable conditions—flooding, drought, salinity—is at the top of IRRI’s agenda in plant breeding. In the next survey round, we may see more farmers planting flood-tolerant varieties in the wet season and perhaps adopting hybrid varieties in the dry season.

Finally, it should be noted that the 2015-16 survey is already completed and is being reviewed by the Social Sciences Division (SSD) at IRRI. There are plans to continue the periodic survey in the future.

[su_box title=”More on the Central Luzon Loop Survey, 1966-2012″]Surveys say… trends in rice productivity and varietal improvement and other findings from the loop survey.

An enterprising family. The recorded experience of one farm family, the Santoses, that goes beyond the loop survey data and into family and farming issues.[/su_box]

This article is a synthesis of the IRRI book: Changes in rice farming in the Philippines: Insights from five decades of a household-level survey. Individual household data can be accessed online

Ms. Moya is a consultant and former senior research manager at SSD, Dr. Kajisa is a professor at Aoyama Gakuin University in Japan and former senior agriculture economist at SSD, Dr. Barker is Professor Emeritus at Cornell University and IRRI, Dr. Mohanty is a principal scientist and head of SSD, Ms. Gascon is a former SSD associate scientist, and Ms. San Valentin is a researcher at SSD.