Future rice production and food security across Africa are under pressure as a result of climate change-induced increases in heat, drought, salinity, and floods. 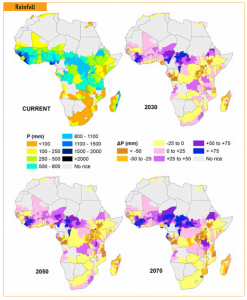 Rice is grown in a wide range of climates across Africa ranging from cold conditions in the highlands of, for example, Madagascar, Ethiopia, and Rwanda, to extremely hot conditions such as in the Sahel zone or Egypt. Future rice production and food security are under pressure as a result of climate change-induced increases in heat, drought, salinity, and floods.

As a first step in understanding the future climate changes and the impact on rice production, spatial analysts from the Africa Rice Center (AfricaRice) have quantified the projected changes
in average maximum and minimum temperature (ΔT) and total rainfall (ΔP) during the rice-growing season. Downscaled climate change scenarios were overlaid with rice maps and rice phenology from the RiceAtlas of the International Rice Research Institute. The analysis was performed for three time periods (2030s, 2050s, and 2070s), four scenarios developed by the International
Panel on Climate Change, namely Representative
Concentration Pathways (RCP 2.6,
4.5, 6.0, and 8.5), and two agriculture seasons (wet and dry). 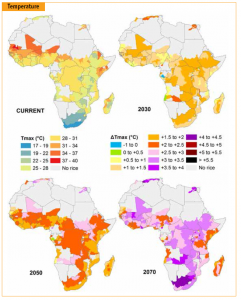 Projected rainfall patterns are diverse; increase in seasonal rainfall is predicted in Central Africa (Nigeria, Niger, Chad, and South Sudan) and northern Ethiopia. Reduction in rainfall is predicted in eastern Africa and Madagascar in all RCPs. Maximum temperature is projected to increase in almost all countries under the different RCPs but at different levels. The strongest temperature increases are predicted for Mali and the bordering administrative units in Burkina Faso where the average maximum temperature are already high, ranging from 30 degrees Centigrade to 41 degrees Centigrade, during current growing seasons. The second zone where strong temperature increases are predicted is the currently relatively cool belt stretching from Ethiopia to Zimbabwe. Temperature increases in the highland areas in these countries may offer new opportunities for rice farmers

Dr. Zwart is GIS and remote sensing specialist, Mr. Dembélé is postmaster fellow, and Dr. Van Oort is crop modeler. All authors are working in the Sustainable Productivity Enhancement Group at AfricaRice.