A partnership between researchers and smallholder farmers in lower Myanmar is improving agricultural profitability and productivity through rice-rice and rice-pulse cropping systems. 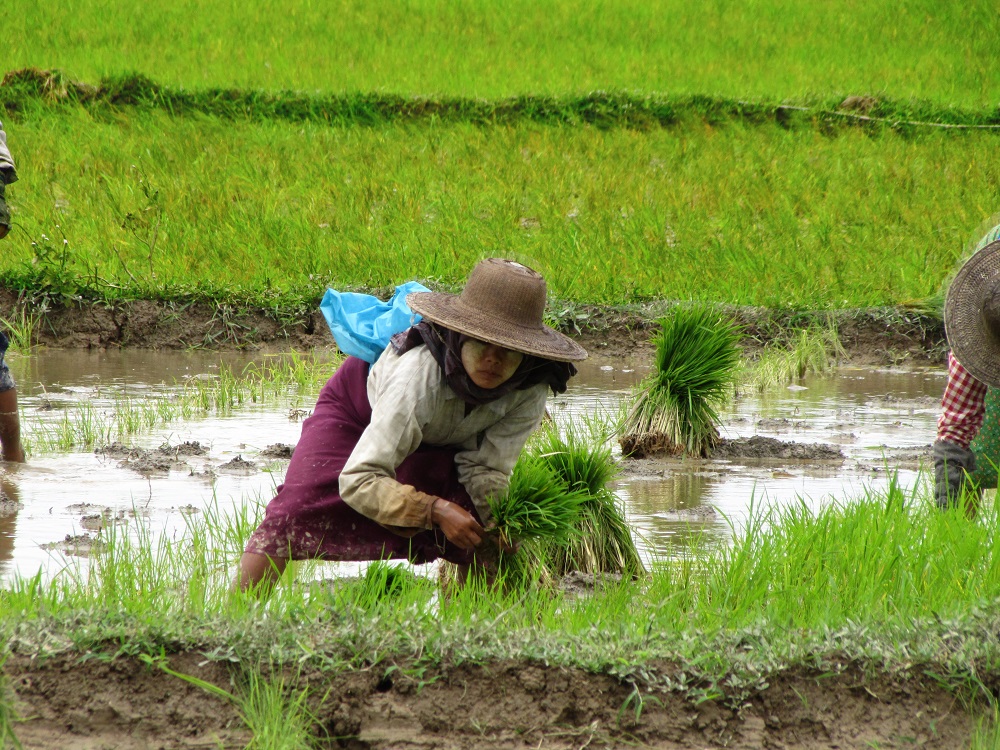 In Myanmar, a partnership between researchers and smallholder farmers is giving equal opportunity and increased capacity to both men and women. (Photo: Grant Singleton, IRRI)

In the 1960s, Myanmar was a leading rice exporter in the global rice market. Political developments in the country, however, closed off the nation from neighboring trade and international activities and dampened its once-illustrious rice sector.

With the democratic reforms in recent years, Myanmar has slowly reopened its doors to global trade and other countries as it strives to transform its economy. Myanmar’s economic growth hinges on the development of its agriculture, particularly the rice sector.

The role of rice
Rice is very important in Myanmar. It is cultivated on 64% of the country’s arable land—more than 8 million hectares. At least 5 million rural households are involved in rice farming. People living in rural Myanmar have a large per capita consumption of rice—up to 154 kilograms per year. Rice provided 70% of their daily calorie intake in 2016. At the moment, most of the rice produced in Myanmar is used to feed the local population of more than 52 million.

Despite Myanmar’s rich land and water resources, its rice farmers are far behind their Asian neighbors. Rice yields along the country’s fertile Ayeyarwady Delta are only half of those along Vietnam’s Mekong Delta. Farmers grow rice in the monsoon season. But, during the dry season, only about a third of them grow rice while the rest grow pulses.

A new dawn for farmers
The Ministry of Agriculture, Livestock, and Irrigation (MOALI) is keen to regain the country’s status as a major rice exporter and increase the income of its rice farmers. Increasing production will help Myanmar be more competitive in regional and global rice markets. To do so, it is essential to increase the efficiency of production and quality of its rice by allowing its farmers to avail of new crop varieties and agricultural expertise.

The Australian Centre for International Agricultural Research (ACIAR), in partnership with MOALI, is working to improve agricultural productivity and sustainability and food system resilience in Myanmar through the MyRice project. Formally known as Diversification and intensification of rice-based systems in lower Myanmar, the project aims to diversify and intensify rice-based systems in lower Myanmar and assist smallholder farmers in the mid and upper Ayeyarwady Delta. The Department of Agriculture (DOA), Department of Agricultural Research (DAR), and Yezin Agricultural University (YAU)—all under MOALI—and the International Rice Research Institute (IRRI) are the main partners in the ACIAR MyRice project.

Under the project, IRRI works closely with its local partners to improve farm productivity and the profitability of smallholder farmers. Meanwhile, in addition to rice, MOALI is looking at the production of pulses and other high-value crops that are often grown immediately after the harvest of the monsoon rice. 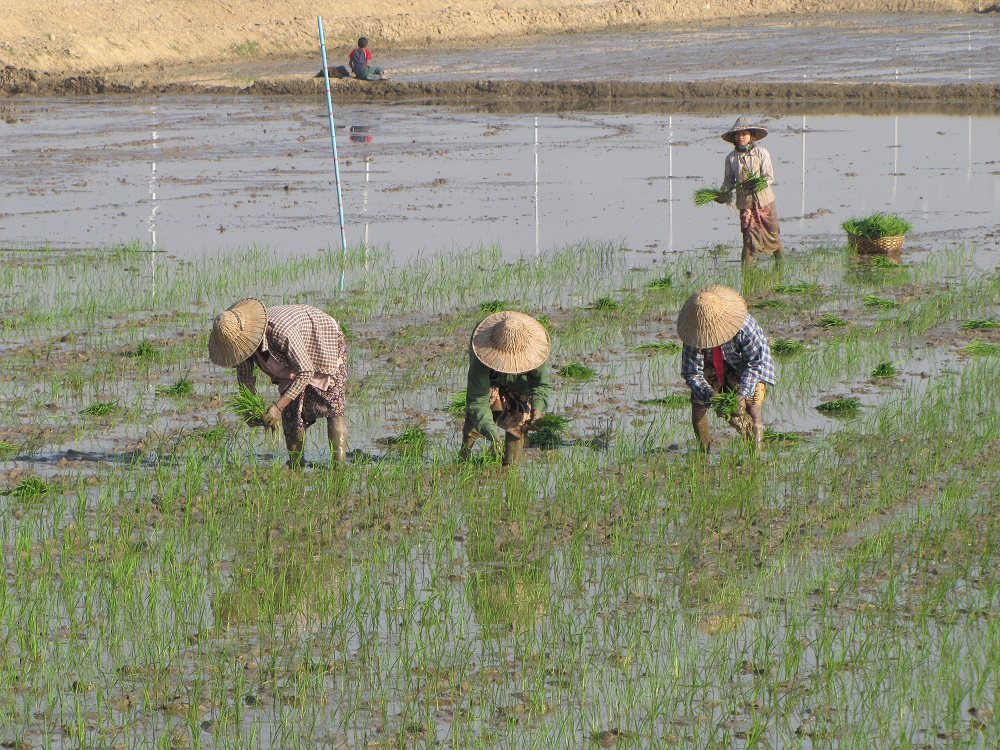 SMALLHOLDER FARMERS in lower Myanmar have struggled with low yield and income from rice farming. ACIAR’s MYRice program has brought these farmers together to become partners in agricultural development. (Photo: Grant Singleton, IRRI)

Solutions through farmer participation
With partners from DAR and DOA, the MyRice project identified Maubin in the Ayeyarwady region and Daik Oo in the Bago region for its initiatives. Forty-four trials were undertaken from the 2012-13 dry season to the 2016 wet season. These were on-farm participatory adaptive research trials, implemented with 2,990 farmer-partners. The trials focused on short-duration and new high-yielding varieties of rice and pulses, best management practices, community rodent management, and improved postharvest management. A participatory varietal selection (PVS) approach was used to obtain immediate feedback from farmers— their reasons for their preferences and constraints to adoption.

“The PVS approach helped Myanmar’s agricultural technicians and farmers to obtain a variety that suits their tastes and preferences,” says Dr. Daw Tin Tin Myint, deputy director general of DAR and MyRice collaborating scientist. “It’s a leading technique for all participants to be involved in making decisions.”

U Maung Maung Aye, a 52-year-old farmer from Phaung Wae Village in Daik Oo, joined the trials on varietal selection for new green gram varieties. He also participated in the trial for best management practices in rice during the 2015 monsoon season.

“We were taught new ways of planting pulses such as line sowing,” U Maung Maung Aye says. “I prefer it over our traditional practice of broadcasting seeds because seed rates are lower using line sowing.” He uses 8 kilograms per hectare with broadcast seeding compared with only 3.2 kg with line sowing.

The new and improved crop varieties enable farmers to obtain higher yield and income, and to cope with the effects of climate change. Dr. Aye Min, DOA assistant director and MyRice collaborating scientist, says: “Farmers feel more secure and are able to save on input costs.”

Trials on drum seeding and integrated weed management in the rice-pulse system in Maubin indicated a benefit of USD 15 per hectare for the monsoon crop compared with the farmers’ practice of transplanting. Row seeding using a drum seeder provided farmers with an extra USD 100 per hectare for the summer crop.

In the 2014, 2015, and 2016 wet seasons, 8,148 kg of seed for monsoon rice varieties was distributed to 352 farmers in the Ayeyarwady and Bago regions. In the 2015, 2016, and 2017 dry seasons, 5,124 kg of seed for summer rice varieties was distributed to 204 farmers. For the first time in 20 years, pulse farmers in Myanmar have had access to new pulse varieties and more than 340 pulse farmers have adopted them. The combined benefit from new varieties and new best management practices (pre- and postharvest) indicate that productivity benefits will surpass 40%.

Postharvest gains
An assessment conducted by IRRI in 2013 revealed that farmers in rice-pulse areas practice manual harvesting and then pile up the harvested crops for as long as three weeks while they prepare their land for pulses. Farmers rely on outdated local threshers that are unable to thresh wet rice and are not mobile. This means that quality deteriorates and the harvest sells for a low price. The MyRice team measured the losses from the traditional postproduction process and compared these with the best management practices introduced by IRRI. Rice grain losses from traditional practices—piling, use of heavy threshers, sun drying, and storing—can reach 13%. Rodents also cause significant damage and farmers lose about 100 kilograms of rice every six months. This is enough to feed a family for more than a month.

Best practice techniques include threshing crops immediately after harvest using a lightweight thresher or a combine harvester, systematic drying using a flatbed dryer, and storing the paddy and pulses in hermetic (airtight) bags.

“I am mostly impressed with the combine harvester, which I used to harvest rice last summer,” says U Shwe Toe, one of the cooperators. Women involved in farming activities reported that they had more social and community activities when they began renting combine harvesters.

Since 2013, the use of combine harvesters in the village has significantly increased. Farmers have also tried using hermetic bags and 1- or 5-ton GrainSafes to store their pulses.

Daw Tin Yee, a rice farmer for 25 years, stored her pulse seeds for nine months in a hermetic IRRI Super Bag. “After storage in the Super Bag, I noticed that the color of the seed is better, the germination rate is higher, and there was no insect infestation,” she recalls.

The following season, Daw Tin Yee planted stored Yezin 2 seeds and harvested 12 baskets per acre. “The trader also preferred Yezin 2 so I was able to sell it at 48,000 kyats (USD 36) per basket,” she says. “I used the profit to renovate my house.”

The MyRice group also introduced community-level rodent management and reduced rodent losses by 25%. Farmers benefited by up to USD 81 per household. Another benefit was decreased contamination by feces, thus improving human health. 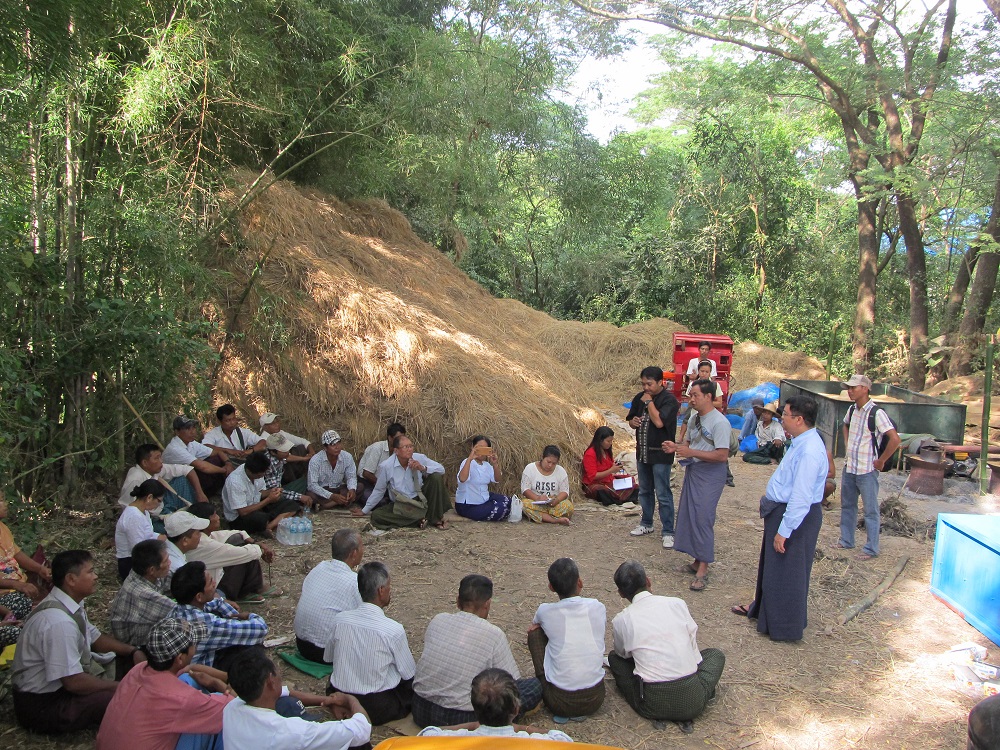 Building networks for change
The MyRice team established a multiple-stakeholder platform called a Learning Alliance (LA) to engage with different groups across the rice value chain. Farmers, traders, millers, DOA staff, and IRRI shared their knowledge and experience of technologies to optimize rice and pulse production.

The LA became an avenue for these groups to collectively assess their experiences from the best management practice trials and to identify opportunities to maximize the benefits. They visited the main wholesale market for rice, and the seed farms, where they learned about quality, different varieties, and the process of selling in markets.

Alliance members also participated in a lightweight thresher demonstration on U Shwe Toe’s farm to show how immediate threshing can reduce postharvest losses.

Recently, members organized farmer groups to develop postharvest services for the community in threshing, drying, and storage. From the best management practice technologies used during the postharvest loss assessment trials, members chose the technologies they preferred to rent out and generate profit.

Equal opportunity and increased capacity
Collecting data on gender is part of the MyRice project. Gender equality outcomes are measured via large household surveys at the beginning and end of a project, and seasonal farmer diaries. Gender equity was examined in one of the project’s townships using the framework of the Women’s Empowerment in Agriculture Index (WEAI). Participatory varietal selection trials recorded the preferences of men and women farmers based on agronomic characteristics and cooking and eating quality of rice varieties tested on-farm. Feedback identified the most preferred rice varieties and their seed multiplication and distribution in the community.

Women farmers, such as Daw Aye Nyein, not only became active cooperators but also successful seed growers. “I was able to pay off my loans because of the profit I earned,” she says.

The MyRice project raised awareness among the project partners of the benefits of research and development on gender equity for agricultural smallholder communities.

MyRice is supporting two Ph.D. students and Master of Science thesis grants for 17 DOA and DAR staff. The DOA partners who were mentored on farmer participatory research have gained project implementation skills and are now taking the lead during farmer meetings and field days. 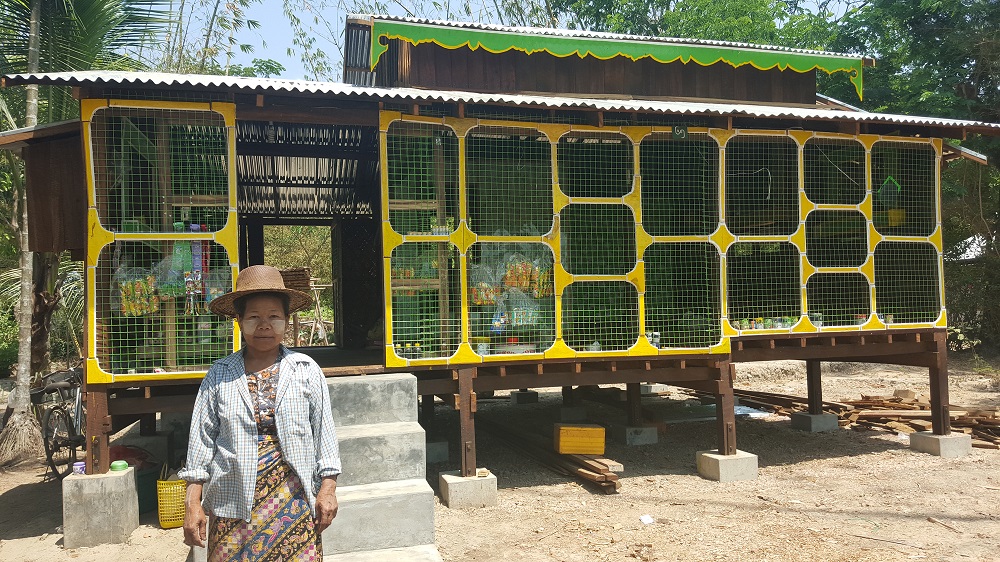 DAW TIN Yee, a farmer from Maubin, joined the MYRice on-farm research activities and benefited from her learning. (Photo: ACIAR)

Sustainable adoption pathways
The MyRice team is ramping up plans to further scale out best management practices and high-yielding varieties of rice and pulses. The project is also collaborating with other ACIAR initiatives in the country, such as MyPulse (legumes), MyFish (fisheries), and MyLife (livelihoods).

“The support for, and appreciation of, the project’s benefits to smallholder farmers from the government of Myanmar has strengthened because of the impressive results of field demonstrations and the process of participatory engagement with farmer groups,” says Dr. Grant Singleton, a scientist at IRRI and MyRice program manager.

“We are very pleased with the results of our collaborative research in Daik Oo,” says U Hla Myint, DOA regional director of Bago. “It is now time to expand the project in 2017.” He and his counterpart in the Ayeyarwady region, U Tun Aung Kyaw, met with their staff to identify outreach priorities for the next year.

During the MyRice project meeting in October 2016, U Hla Myint said: “In 2017, we will expand MyRice to 63 new villages from four districts. This will require a large investment of resources—my extension staff’s time and operating funds. The regional government is willing to provide the main investment in this outreach.”

A similar commitment was made by U Tun Aung Kyaw. Initiatives from the MyRice project are a great contribution to Myanmar’s goal to regain its position as a significant contributor to regional and global food security through rice. Strong collaboration and engagement among MOALI, IRRI, nongovernment organizations, and private-sector partners are also highly important.

Boosting competitiveness in the domestic and international rice markets is critical. Methods learned in the MyRice project and access to new rice varieties will assist and will help pave the way toward the sustainable development of Myanmar’s agricultural sector.

This article is reprinted from the second issue of ACIAR’s Partners in Research and Development (2017).

Ms. Rojas-Azucena is a communication specialist at IRRI. Dr. Singleton is a principal scientist and MyRice program manager at IRRI.