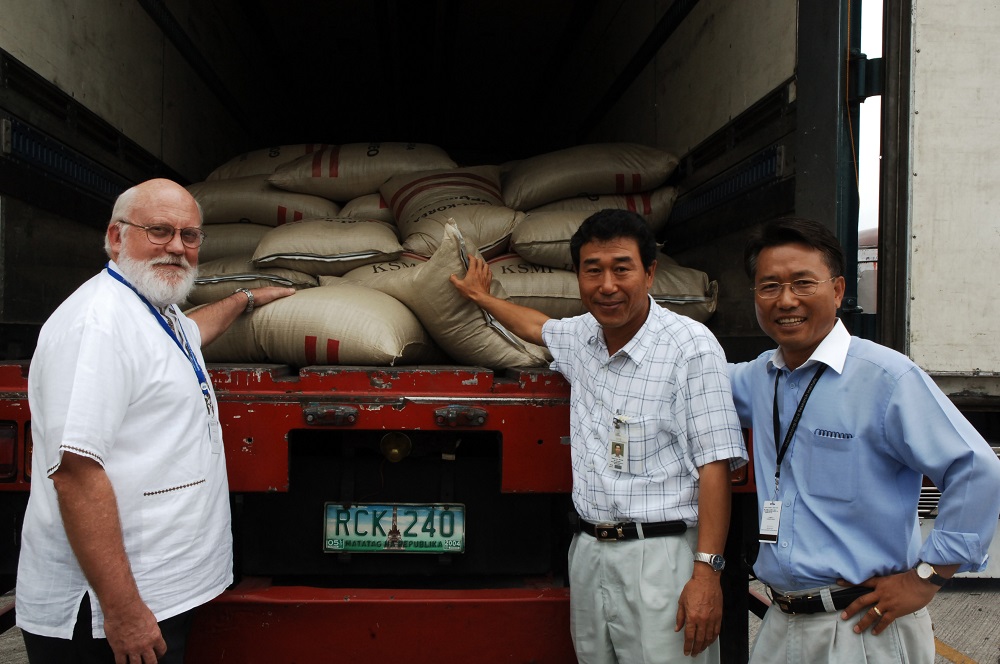 As part of the “Top Rice Project” of the Republic of Korea’s Rural Development Administration (RDA), 25 tons of high-quality rice seed were harvested in February-March at the Philippine headquarters of the International Rice Research Institute (IRRI). The seed was transported in a fleet of trucks to the Ninoy Aquino International Airport, Manila, on 31 March and has since made its way to the RDA’s National Institute of Crop Science in Suwon, Korea.

The Top Rice Project, launched in 2005, aims to develop and popularize high-quality rice in Korea. As part of this drive, RDA and IRRI initiated the Large-Scale Korean Seed Multiplication Project in 2005-06.

Through this seed multiplication project, newly developed premium quality varieties—known as Gopumbyeo and Unkwangbyeo—are being multiplied at IRRI before transport to Korea and distribution to Korean rice farmers.

Multiplication of Korean rice seed at the IRRI farm in the Philippines has been an important part of Korea’s rice production for almost four decades. The country’s achievement  of rice self-sufficiency through the Green Revolution of the 1970s was made possible through similar past collaboration between IRRI and RDA. The first Korean Seed Multiplication Project, for rapid dissemination of the popular Tongil variety, occurred in the 1969-70 dry season.

Multiplication of Korean rice seed in the Philippines has also enabled Korea to accelerate its research programs. Since 1970, Korea has sent its rice breeding nurseries and advanced lines to the Philippines for seed multiplication during the winter, thus cutting years off the time required to develop new rice varieties.

This practice has also helped Korea protect its farmers against production threats. In 1980-81, for example, Korean rice breeders used the Philippine-grown winter crop to gain time in a “gene rotation” program to retain blast resistance in Korea’s rice crop. In November 1980, 305 kilograms of Korean seed were multiplied at IRRI into 120.5 tons. Once back in Korea, that seed was further multiplied on 2,544 hectares during the Korean summer of 1981. The following year, it was used to plant 130,000 hectares of Korea’s then 1.2 million hectares of rice land, so providing a genetic barrier to the spread of rice blast.

The most recent Korean rice seed multiplication was performed in a 14-hectare upland field at IRRI under the supervision of Hung-Goo Hwang, a senior Korean scientist seconded from RDA currently working in IRRI’s Plant Breeding, Genetics, and Biotechnology Division, and Kyu-Seong Lee, visiting research fellow and RDA senior rice breeder.

“I am very happy that we reached our target production and we finished our project successfully,” said Dr. Hwang.