Big or small, modest or grand, innovations are helping IRRI and its partners move forward their mission to end hunger and poverty. 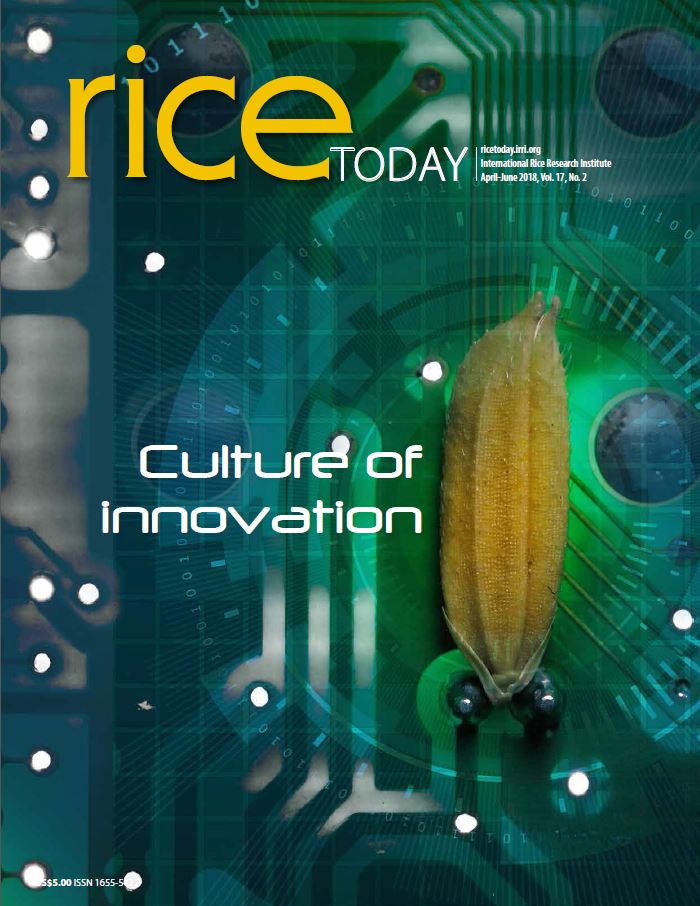 Innovations, no matter how simple they may appear, have been propelling civilization forward and, throughout its long history, inventive ideas have shaped the agricultural sector.

Take the wooden digging stick. Our ancestors relied on this implement, a design of great simplicity, to dig out holes in the ground to plant seeds and unearth roots and tubers for food. The digging stick also made it easier to convert land into new farms. Thousands of years and countless “lightbulb moments” later, farmers now have a wide array of modern agricultural machinery to produce, harvest, and store crops.

The early plant breeders are believed to have domesticated the first crops some 10,000 years ago by storing and carrying edible seeds of wild plants for future consumption. Some experts say that crop diversification could have started from the mere act of storing seeds of plants that possess certain qualities that they liked. Yet, this modest change led to agricultural productivity that enabled empires and nations to rise. Building on past innovations in crop breeding, scientists have created tools that allow them to delve into the plants’ DNA to create new varieties with improved characteristics.

But what is an innovation? How do you spot it? Most importantly, how do you create it?

Idea to Value, an online community that helps people improve their ability to come up with new ideas and convert creative concepts into concrete products, interviewed several innovation “instigators and insurgents” to define the word.

Drew Boyd, co-author of Inside the box: A proven system of creativity for breakthrough results, said that an innovation is anything that is “new, useful, and surprising.”

“Work that delivers new goodness to new customers in new markets, and does it in a way that radically improves the profitability equation,” said Mike Shipulski, an innovation thought leader.

Corporate innovation consultant Jeffrey Baumgartner describes it as the “implementation of creative ideas in order to generate value, usually through increased revenues, reduced costs, or both.”

From the many different responses he received, Nick Skillicorn, chief editor and founder of Idea to Value, came up with his “ultimate” definition: “Executing an idea which addresses a specific challenge and achieves value for both the company and customer.”

The International Rice Research Institute (IRRI) is synonymous with some of the biggest innovations in rice science: from better rice varieties that feed billions of people every day to complex experiments to re-wire the rice plant and turn it into a lean, mean grain-producing machine. But, in this issue of Rice Today, we feature a host of ingenious contraptions and methods outside the realm of rice breeding. Some of these, such as the digging stick, may be of the most basic design and yet are useful, address a specific challenge, and generate value. “Great innovations are the simple ones that make you slap your forehead and say, ‘Gee, why didn’t I think of that?’” Mr. Boyd said. Other innovations are speeding up the transfer of technology generated by scientists from the laboratory into the hands of farmers constantly battling destructive rodents and weeds, low productivity, and unfavorable environments.

Big or small, modest or grand, these innovations are helping IRRI and its partners move forward their mission to end hunger and poverty.