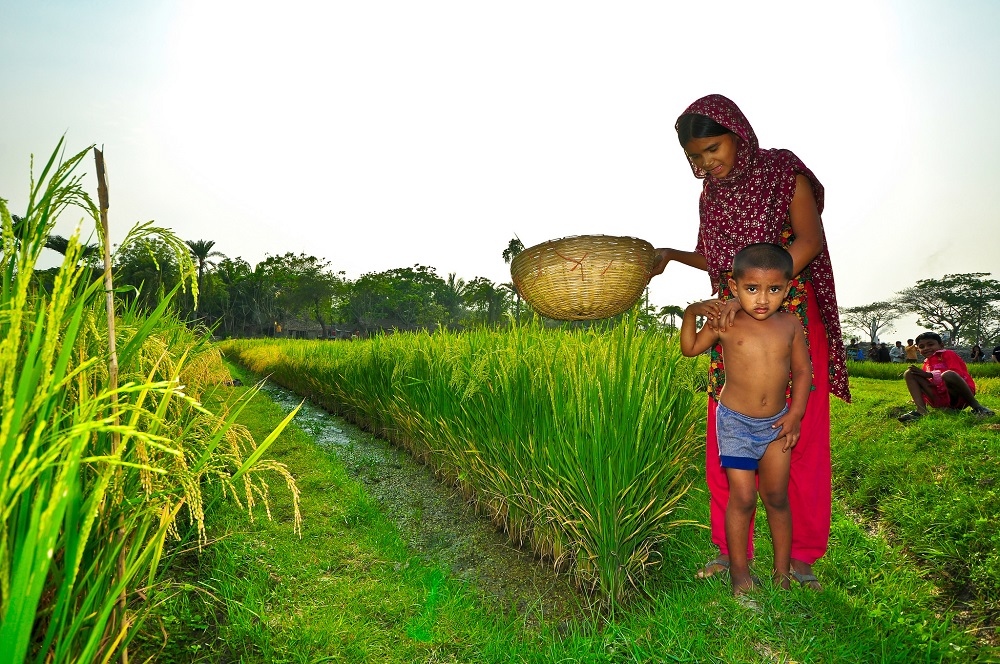 Almost 40% of the world’s harvested rice area is in South Asia―home to 1.1 billion people (74% of the population) that survive on less than US$2.00 per day and 600 million people (40% of the population) that live on less than $1.25 a day. Furthermore, rice provides around 30% of the calories consumed by 1.48 billion South Asians. These are just some of the statistics that reveal how rice farming is important for the region.

The poorest rice farmers produce their crop under rainfed conditions, in which drought, submergence, and poor soils drastically reduce yields and harm farmers’ livelihoods. Recent advances in genetics and breeding have made the development of stress-tolerant rice varieties feasible and their cultivation can substantially contribute to poverty alleviation, especially in rainfed environments. If we can locate exactly where rice is cultivated and under what conditions, we will be able to identify the regions where new stress-tolerant rice varieties—being developed and promoted through the Stress-Tolerant Rice for Poor Farmers in Africa and South Asia (STRASA) and Green Super Rice (GSR) projects—will have maximum impacts on the livelihoods of resource-poor farmers.

In collaboration with the STRASA and GSR projects, we have developed a series of maps that accurately display the location and types of rice production in agroecosystems across six countries in South Asia.

We started with an extensive field survey across as many different rice systems as possible to describe the on-the-ground conditions in terms of the number of crops per season and whether the crops are rainfed or irrigated. We then acquired remotely sensed images of the entire region with a spatial resolution of around 20 hectares at regular intervals throughout the season. This time series of images was used to characterize the phenology―that is, the health of the plant in relation to its climatic conditions—at our survey sites to provide us with a set of “signatures” for the different rice agroecosystems.

Then, in connection with various remote-sensing analyses, we compared these signatures to the time series of vegetation vigor in each and every 20-hectare pixel across South Asia to create a rice map for the wet season (also known as the kharif, aman, maha, autumn, or fall season) for all South Asia. A subset of the survey data is kept back and used to validate and assess how accurate the map is. The mapped rice area is then compared against agricultural statistics and expert knowledge to confirm its reliability. We tested this methodology on the 2000-01 season since this was the most recent “good year” for rice cultivation in South Asia as no widespread droughts or flood events occurred during that season. Since the map has high accuracy (over 80% accuracy and a 94% agreement with district-level rice statistics), this encouraged us to apply the method to other years. Here, we present the map for the 2009-10 wet season, which we believe to be the most up-to-date and detailed map of rice cultivation areas in South Asia. 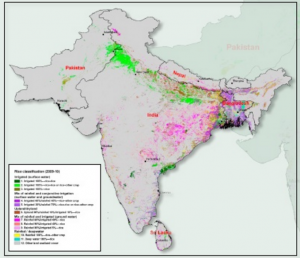 The map (right) shows 11 classes of rice cultivation covering 50.6 million hectares. The two major types are irrigated and rainfed. The irrigated classes account for 24.2 million hectares and are further described by their irrigation type, such as surface-water irrigation (from tanks, rivers, or reservoirs), groundwater irrigation (from wells or springs, and the cropping system, such as single rice, rice-rice, or rice–other crop systems. The rainfed classes account for 26.4 million hectares and include areas that have some occasional supplemental irrigation from groundwater sources as well as upland/dryland rice and deepwater rice areas as found in eastern Bangladesh.

The map shows a complex pattern, in terms of both where and how rice is cultivated. As expected, the dominant rice areas are in northern and eastern India, Bangladesh, the river systems of Pakistan, and the southern lowlands of Nepal. However, rice cultivation occurs in almost every region where there is arable land and a suitable climate. The variation in rice systems is equally diverse. There are some dominant trends such as the irrigated rice–other crops across northern India, the rice-rice areas east of Hyderabad in Andhra Pradesh, and the rainfed areas stretching between Kolkata and Hyderabad. But, there are also areas such as Bangladesh, the far northeast of India, southern India, and Sri Lanka where no single system dominates and several systems lie within close proximity.

This map is a useful output in itself, but it also forms the basis for further research. By producing rice area maps for different years, we can observe trends in rice area as producers move from one crop to another (e.g., from rice to sugar cane) or as land is converted to other uses. Examples of agricultural expansion include areas where stress-tolerant rice varieties permit farmers to cultivate land that they could not use before. Conversely, agricultural land can be lost when pressure to convert arable land to other uses, particularly for urban expansion and development, is high. We also use these maps to identify the extent, duration, and frequency of submergence and drought events during the growing season. When these maps are fully validated, they will be made available on the International Rice Research Institute’s Web site as a valuable resource for mapping and monitoring the trends in rice cultivation across Asia.