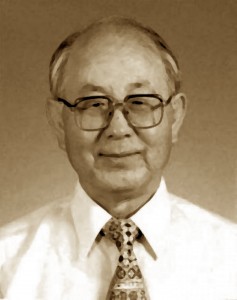 Dr. Heu was a remarkable plant breeder who demonstrated great skills, dedication, and passion for his work.

“Let’s increase food production without letting land stand idle,” Park Chung-Hee, then president of the Republic of Korea (South Korea), challenged his people in 1961. Following the devastations of the Korean War, the president rallied the country to fight yet another battle—against widespread hunger and malnutrition. Instead of guns and bullets, he aimed to increase its rice production. And, at the forefront of this war was not a highly decorated military general but a scientist named Mun-Hue Heu.

Dr. Heu was a remarkable plant breeder who demonstrated great skills, dedication, and passion for his work. He joined IRRI as a visiting scientist in 1965 and then became a plant breeder from 1980 to 1982. He received encouragement from the then IRRI director general, Robert Chandler, to develop high-yielding rice varieties for South Korea. With IRRI’s assistance, Dr. Heu brought the Green Revolution to South Korea. He was, in fact, hailed as the Father of the Korean Green Revolution.

Dr. Heu was instrumental in developing Tong-Il (“reunification”)-type rice, a modern variety that helped Korea achieve self-sufficiency in rice production.  In 1965, Dr. Heu, while working with Dr. Hank Beachell, then head of IRRI’s Plant Breeding Division, made the first cross between Yukara, a japonica variety, and indica variety T(N)1. The first generation (F1) plants were designated as IR568. The following year, he made a three-way cross using IR8 (as the female parent) and IR568. The resulting F1 hybrids were named IR667. Dr. Heu and a team of scientists from Korea’s Rural Development Administration (RDA) grew the second-generation (F2) progenies and made pedigree selections for advancing generations at IRRI. Through the IRRI-RDA shuttle breeding program, the selected progenies were advanced through the F7 generation. The resulting breeding line, IR667-98-1-2-213-1, was released in Korea as “Tong-Il” in 1973.

The variety, also known as Korea’s miracle rice, was short, sturdy, and resistant to many pests and diseases. Its yield potential of 5.13 tons per hectare  was 28% higher than that of the japonica variety that was widely cultivated at that time. It was initially released commercially in 1973, followed by other Tong-Il-type varieties that led to Korea’s Green Revolution.

President Park Chung-Hee strongly supported Tong-Il rice and predicted that South Korea would be self-sufficient in rice by 1976 if all rice farmers adopted the variety and new production technologies.

Tong-Il, Korea’s “miracle rice,” with its yield potential of 5 tons per hectare, played a major role in enabling the country to achieve self-sufficiency in rice production in the 1970s. (Photo: Moises John Reyes)

For all its strength, however, the Tong-Il had major weaknesses. The variety was susceptible to rice blast and was not cold tolerant (see Grappling with cold). In 1980, a cold snap and an outbreak of the disease created such havoc in rice production that it caused a large shortage. The Tong-Il variety finally disappeared in 1993 after the Korean government ended its program of purchasing rice from farmers and started recommending other rice varieties. Tong-Il is now “just a memory,” someone once remarked. But, it certainly did not diminish Dr. Heu’s place in his country’s recent history

The development of Tong-Il rice was named as one of the most important scientific achievements in the 20th century in South Korea by Chosun Ilbo, one of the country’s highly respected newspapers. More importantly, Dr. Heu helped put rice on the table at a time when the Korean people didn’t know where their next meal would come from.

He also demonstrated the power of plant breeding and unlocked the wide possibilities for the development of modern rice varieties. “Successful cultivation of Tong-Il-type rice set new milestones for future improvement of rice varieties in Korea and also offered practical opportunities to use indica germplasm in temperate countries,” Dr. Heu wrote.

Dr. Heu passed away on 24 November in Seoul at age 83 with his beloved wife, Hyuk-Mae Kwon, and children at his side. His death was mourned not only by his immediate family but by the whole nation because of the legacy that this legendary scientist left behind. His achievements in agriculture and in improving food security in his country will live forever.