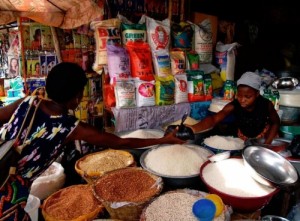 “Everyone to the farm,” is the new decree of President Wade of Senegal—a country that has seen massive riots in the last few months, when thousands of citizens carrying empty rice sacks on their heads marched in protest against soaring rice prices. The President has just unveiled an ambitious agricultural plan called the Great Agricultural Offensive for Food and Abundance (GOANA), which aims to Abundance make Senegal self-sufficient in food staples, especially rice. GOANA’s target is to produce in the next season 500,000 tons of rice—2.5 times more than the current production.

Senegal, where rice-fish called cebbu jen is the most popular daily dish, consumes about 800,000 tons of rice per year and nearly 80% of this is imported at a cost of more than 100 billion CFA francs (US$247 million). Some Senegalese call this the “tyranny of rice” because of its huge negative impact on the national economy.

President Wade has said that GOANA will help free Senegal from this tyranny, urging farmers to grow more rice (and even asking his ministers and government officials to farm at least 20 hectares each). The government has earmarked 750 billion CFA francs ($1.85 billion) for boosting national rice production. The money will be used to improve irrigation facilities and farmers’ access to seed, fertilizer, and equipment.

Similar announcements have been made by governments of several African countries in the wake of the rice crisis—news that comes as a relief to local rice farmers.

“We think that the crisis has forced our government to pay attention to local rice production, which has been neglected for so long,” says Abdoulaye Ouédraogo, a rice farmer from Burkina Faso, which is now investing massively in agriculture. He added that if the government had listened to the farmers earlier, the country would not have been in such a crisis, referring to food riots that recently broke out in the cities.

As expected, in contrast to urban consumers, African farmers are happy about the high price of rice. “I have never seen this kind of price hike in 30 years,” says Abdoulaye. “Just a few months ago, 1 kilogram of paddy [unhulled] rice was selling here for 110 CFA francs [$0.27] and now it is 225 CFA francs [$0.56].”

In neighboring Mali, the grain is so much in the limelight today that some citizens joke the country will soon have a Minister of Rice. In April 2008, the government launched an Initiative riz (rice initiative) as “a structural response to the rice crisis.”

The aim of this program is to double Mali’s annual milled rice production in 2008-09 to 1 million tons, which will not only meet domestic demand but also provide a surplus of 100,000 tons for export. In addition, Prime Minister Modibo Sidibé is placing considerable importance on the national rice research program. “There is no agricultural development without research,” he said.

According to the Africa Rice Center (WARDA), the rice crisis offers a big opportunity for Africa to use its latent potential for production and break from decades of policy bias against agriculture. Except for Egypt, Africa is a net importer of rice with Nigeria, South Africa, Senegal, and Côte d’Ivoire ranking among the top 10 importers of rice in the world.

With nearly 40% of the continent’s total rice consumption coming from the international market, African national rice economies are more exposed to unpredictable external supply and price shocks than those of other continents. Africa is especially vulnerable because of the high prevalence of poverty and food insecurity.

“Africa faces not only problems of affordability of rice but also of availability in the international market because of the rice export bans by several countries,” says WARDA Director General Papa Abdoulaye Seck. “Since 2006, WARDA has been systematically alerting the governments of its member states to a looming rice crisis in Africa.”

According to Dr. Seck, the best option for Africa to manage the crisis is to combine emergency responses in the short term with measures that favor sustainable expansion of the continent’s rice supply in the longer term. Short-term measures include reduction of customs duties and taxes on imported rice and setting up of mechanisms to avoid speculation in rice markets. At the same time, governments must avoid undermining incentives for domestic rice production. In the medium and long term, taxes on all critical inputs, cost saving agricultural machinery and equipment, and post harvest technologies need to be reduced.

Governments should also facilitate access to credit for farmers, expand rice areas under irrigation, and improve rural infrastructure. There also needs to be concerted investment in regional research capacity to support the development of rice varieties resistant to major pests and diseases and sufficiently robust to withstand drought and climate change induced environmental shocks.

To assist the African countries that have been severely hit by soaring prices, an Emergency Rice Initiative for Africa was launched in June 2008 by WARDA, the Food and Agriculture Organization of the United Nations (FAO), IFDC (an international center for soil fertility and agricultural development), Catholic Relief Services, and the International Fund for Agricultural Development.

As a complement to ongoing national and regional initiatives, the Alliance for a Green Revolution in Africa, the New Partnership for Africa’s Development, and the Japan International Cooperation Agency announced the establishment of the Coalition for African Rice(CARD) with the aim Development of doubling Africa’s rice production in 10 years. The announcement was made during the Tokyo International Conference for African Development in May 2008.

“Given the critical rice situation in Africa, CARD is timely,” said Dr. Seck. “We’re convinced of rice farming’s enormous future in Africa, which has more potential than any other area of the world because of its land and water resources.”