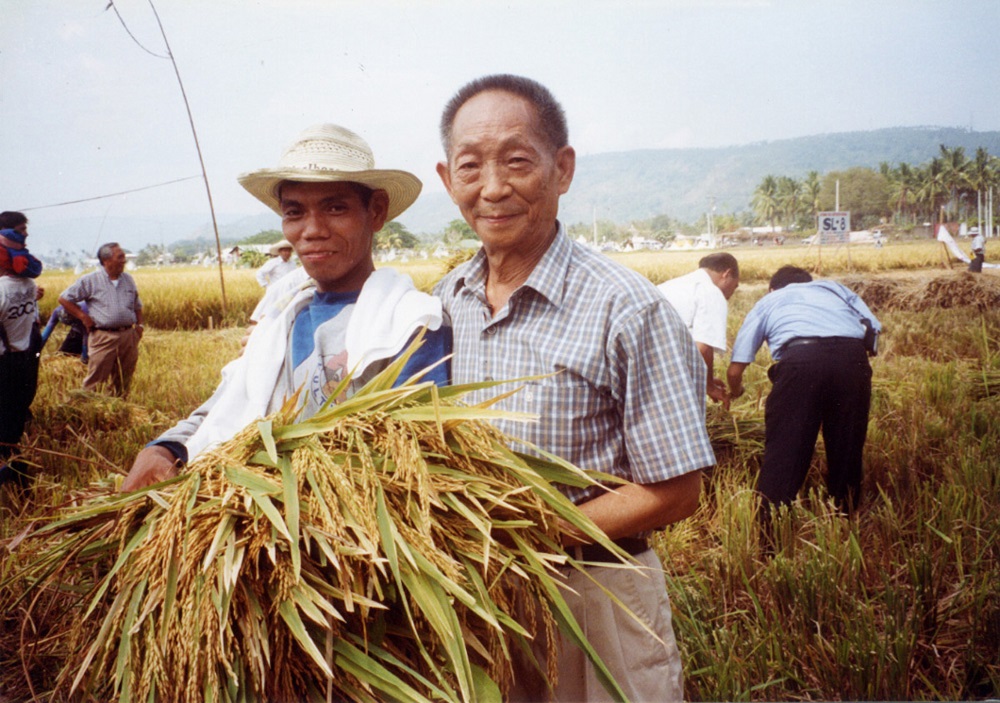 The Father of hybrid rice says that increases in grain production because of planting hybrid rice are key to strengthening China as the world’s second-largest economy. (Photo: IRRI)

Rice scientists hold one of the toughest jobs in the world as they are in constant search of ways to overcome global starvation. One of their achievements is hybrid rice, a type of rice that can significantly increase a farmer’s yield per hectare. In this issue of Rice Today, we get to know the thoughts of this scientific breakthrough’s pioneer—the Father of Hybrid Rice—Professor Longping Yuan. Here, he talks about what he thinks about how hybrid rice outyields ordinary rice, how China became the largest user of this agricultural innovation, how it feels to be named after celestial bodies, what can encourage youth to study agriculture, which countries can be self-sufficient by growing hybrid rice, and why China is the second-largest economy in the world.

How does it feel being named the “Father of Hybrid Rice” and having four asteroids and one college in China named after you?
I have received many awards and prizes in and outside China and I take these honors as a high recognition to encourage me to pursue new heights in developing hybrid rice. My friends and colleagues say, “Credits made Prof. Yuan more modest rather than being a conceited person.”

What encouraged you to be a rice scientist?
Well, rice is the most important food crop in China; it feeds more than 60% of our people. In addition, my working place, Hunan Province, is the number one rice-producing province in terms of total production and planting area in China. Also, I happened to be working on a natural hybrid rice plant, which had very significant heterosis, or hybrid vigor, in a farmer’s field in 1962. This discovery inspired me to start a research project on developing hybrid rice.

In one sentence or two, how would you define hybrid rice?
Hybrid rice is created by crossing two genetically distinct rice lines to produce hybrid seed, which has hybrid vigor (heterosis) and is used for commercial production.

Since hybrid rice is a little more costly to cultivate than ordinary rice, does it cater only to farmers with better financial condition? How can this be a viable option for cash-poor subsistence farmers?
Though the price of hybrid seed is higher, the seed rate for planting hybrids is very low—it is only 15 kilograms per hectare. So, the seed cost per hectare is not high. Even poor farmers can afford it because most Chinese rice farmers have a very small paddy—about 0.3 hectare per family.

Why are other countries slack in adopting hybrid rice?
Seed yield is low. Lines that are suitable to tropical areas are very few. One available line is IR58025A, but its outcrossing rate is poor.

How about Africa? What role will hybrid rice play in rice production areas on this continent now and in the future?
Experiments have shown that hybrid rice varieties perform very well in Madagascar, Liberia, and Guinea. Their yield is two to four times higher than their local varieties. If a government takes strong measures to encourage farmers to plant hybrid rice and if private seed companies are involved, hybrid rice can be commercialized in the near future. Thus, rice production in these countries will have a quantum leap.

Who is the biggest winner in hybrid rice: the farmers who get a higher yield or the private companies that sell hybrid seeds? Why?
Seed production is a low-profit industry in China. For example, Long-Ping High Tec, the biggest hybrid rice seed company in China, sold about 50 million kilograms of hybrid seed, which covered 3 million hectares of planting area in 2010. The net profit was only about US$15 million. That is to say, 1 kilogram of seed earns only $0.30 and one commercial area of a hectare has only a $5 profit. On average, rice farmers can get 500 kilograms more rice per family per year. The biggest winner, I would say, is our state. The increase in grain production because of planting hybrid rice can feed 70 million more people annually. This is an important factor that has made China the second-largest economy in the world.

How do you see hybrid rice in the next 5 years?
The average yield will increase from 7.2 tons to 7.5 tons per hectare in China. The area under hybrid rice outside China will reach 6 million hectares. Interest in agricultural education is generally dwindling.

What do you think can encourage youth to pursue a career in agriculture?
I have visited several modernized agricultural museum gardens, which are very attractive to young city people. Moreover, agricultural college students in some provinces in China need not pay any tuition fee because the government gives grants to them.

Based on your life experiences, how would you advise others to attain success in life or in their chosen career?
My experience in attaining success can be summarized in four words: knowledge, perspiration, inspiration, and chance.