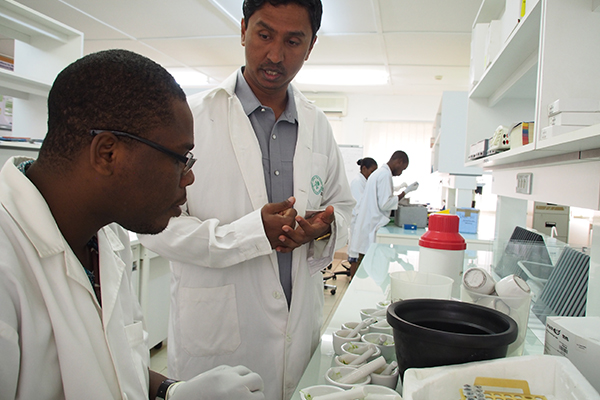 DR. RAMAIAH confers with Arnaud Gouda, a research technician in the AfricaRice Biotechnology Laboratory, where they are “mining” for alleles in the genebank. (Photo: R Raman, AFRICARICE)

Venuprasad Ramaiah: A passion for rice genetics and breeding

Like many of his classmates, Venuprasad Ramaiah was planning to become an engineer. But, during his first year of bachelor’s degree studies at the University of Agricultural Sciences in Bangalore, India, a course in plant genetics taught by an inspiring teacher, Ms. Savithri Amma, marked a turning point in his life.

“For me, that was a ‘wow’ moment,” said Dr. Ramaiah, a scientist at the Africa Rice Center (AfricaRice). “It sparked a passion in me for research in this field. There has been no looking back since then.”

After completing his PhD in genetics of grain yield and root length under drought stress in rice, which he pursued at the same university and at the International Rice Research Institute (IRRI) in the Philippines, Dr. Ramaiah obtained a postdoctoral fellowship at IRRI and, later, at The World Vegetable Center in Taiwan. He then took up the position of a project scientist in the groundnut breeding unit of the International Crops Research Institute for the Semi- Arid Tropics, in Hyderabad, India, in 2009. However, since he was keen to return to rice research, he decided to join AfricaRice as a lowland-rice breeder in 2010.

“My family friends and colleagues thought I was crazy for leaving an attractive position in India, but I am passionate about rice research,” Dr. Ramaiah remarked. “I also strongly believe that the real need is in Africa, where even small contributions can have more impact on the livelihoods of farmers than in Asia.”

At AfricaRice, Dr. Ramaiah works on rice breeding for the rainfed lowland ecosystem with national programs under the Africa-wide rice breeding task force, which covers about 30 countries, and with international organizations, particularly IRRI. He is also closely involved in training research staff and students.

His team has successfully transferred the SUB1 submergence-tolerance gene–identified by IRRI scientist David Mackill and U.C. Davis researcher Pamela Ronald–into two important rice varieties in West Africa (WITA4 and NERICA L-19) that are susceptible to flooding. These Sub1 varieties will be disseminated to rice farmers in flood-prone areas in Africa.

Building on his successful work on drought tolerance at IRRI, Dr. Ramaiah is coordinating an important project at AfricaRice to identify genes for drought tolerance, anaerobic germination, and iron toxicity. The project is done in partnership with Cornell University, IRRI, and the National Institute of Agrobiological Sciences in Japan and with support from the Bill & Melinda Gates Foundation.

Dr. Ramaiah’s pioneering work has already led to the identification of extremely promising material among the more than 2,000 accessions in AfricaRice’s genebank.

These efforts are expected to deliver better stress-tolerant varieties to small and poor African rice farmers in rainfed areas. These varieties will help make the farmers’ yield and income stable as well as protect them from the threats of climate change.

“Despite all the challenges in Africa, it is most rewarding for me and my team to see the results to products and feel that we are a part of it,” said Dr. Ramaiah. “We feel immensely proud that, with proper resources, we can do research on a par with the best organizations in the world.”

Senthilkumar Kalimuthu: A stargazer with feet firmly planted on the ground

Senthilkumar Kalimuthu loves astronomy and space science and named his son Majoris, after one of the largest stars knownto mankind. Yet, as a systems agronomist at the Africa Rice Center (AfricaRice), he has his feet firmly planted on the ground.

Born to a farming family in Ramanathapuram District in Tamil Nadu in southern India, Dr. Kalimuthu vividly remembers his school holidays, which he spent helping his mother on their farm. He recollects the anxiety of farmers in his village as they prayed for rain.

“When rain didn’t come, our rice plants failed to flower and often we had to harvest feed for cattle instead of food for us,” he said.

This experience led him to take up agriculture during his undergraduate studies and focus on water-saving rice cultivation technologies as the topic for his MSc and PhD research so that he could help such farmers.

Dr. Kalimuthu is justifiably proud that not only did he receive the Thirumathi K. Rangammal Award for his MSc research from the Tamil Nadu Agricultural University, but also because his findings were later disseminated to more than a million farmers in Tamil Nadu through the Department of Agriculture.

Since he was keen to help rice farmers and make an impact on the ground, Dr. Kalimuthu joined AfricaRice in 2012 as a systems agronomist at the Center’s regional station in Tanzania. Explaining the potential impact of research in Africa, he said, “Through agronomy, it is possible to double the national average rice yield in Tanzania to 4 tons per hectare. This ‘potential’ is what drives me to work in and for Africa.”

Senthilkumar is coordinating the activities of the Agronomy and Mechanization Task Forces convened by AfricaRice in Eastern and Southern Africa. He is also monitoring rice R&D activities in 12 rice sector development hubs across Tanzania, Uganda, Madagascar, Rwanda, and Ethiopia, where he has trained more than 200 rice researchers and 350 rice farmers in rice agronomy, of which 40% are women. He is also supervising students, research assistants, and some researchers.

His studies and experience are helping him to realize his dream of becoming an eminent agronomist. Importantly, the lessons that he learned during his childhood from his mother on their farm are continuing to guide his footsteps.

Recounting one such lesson, he said that, when he was walking on their farm with his mother, his feet would press on roots of rice plants. He was worried that he was damaging the plants. But his mother assured him that destroying rice roots a little would produce more tillers and more yield. “I didn’t understand at that time. But now, through my experiments, I see how the roots get pruned by mechanical weeding. This helps increase rice tillering and yield.