Seed growers turn Anambé into a valley of prosperity

Rice farmers in Anambé valley in Kolda region, Senegal, have discovered that seed production can be a lucrative business. Within two years they have been able to buy tractors and build new houses for their families with the cash from selling seed of upland rice. (Photo by R. Raman/AfricaRice)

Unknown to many, rice seed growers are quietly turning Anambé, Kolda region in southern Senegal into a valley of prosperity.

Thanks to an amazing synergy among all the stakeholders, subsistence farmers in Kolda have become prosperous in less than two years doing a booming business in quality seed. Also, Kolda has become for the first time a major hub for upland rice seed production in Senegal. This transformation is helping the country move faster towards the goal set by the government to achieve rice self-sufficiency by 2017.

Anambé success story
“With the profits I recently made selling rice seed, I have bought two tractors, and I am thinking of acquiring a third one,” said Mr. Issa Baldé, chairman of the Anambé valley farmers’ federation (FEPROBA) in sector 5, Dialakégné. He proudly announced that he has enrolled his son in a football training school in Dakar, whose fees are 2.6 million FCFA (USD 4,315).

Many other members of FEPROBA, which has about 4,600 farmers, have similar success stories to tell. Some of them are building new houses with the cash from seed sale. They are benefiting from the government’s subsidy scheme for buying agricultural machinery and are able to get bank loans because of the profits they are making from seed production.

“I had never seen 1 million FCFA (USD 1,659) in my life until now,” remarked Souleymane Gano. “By selling rice seeds, I made 1.3 million FCFA (USD 2,157) after paying all my loans.” Mamadou Dian Diallo, another seed grower, has built a 2-storey house with storerooms and bought two tractors and one four-by-four vehicle.

FEPROBA chairman El-Hadj Gano made enough money from selling seeds to buy a tractor, build a house, buy cattle, and enroll his children in a private school. Mrs. Fatoumata Sabaly from Soutouré village in Anambé has produced 77 tons of rice seed this year. She also bought a tractor and has 60 heads of cattle.

Reasons behind the success
The Anambé success story started in July 2014 when FEPROBA received 60 tons of seed of NERICA 4 and NERICA 6 rice varieties for the upland ecology and WITA 9 variety for the lowland ecology. The seeds were distributed by the Africa Rice Center (AfricaRice) and the Senegal Ministry of Agriculture and Rural Equipment as part of the Japan-funded Emergency Rice Initiative implemented by AfricaRice.

Anambé was identified by the National Rice Self-Sufficiency Program (PNAR) as a hub for upland rice seed production because the valley has good water control facilities and also the possibility of supplemental irrigation, if necessary, during the off-season. The government is also keen to improve the livelihoods of farming communities in Kolda, one of the poorest regions of Senegal.

PNAR coordinates the various efforts relating to the development of the national rice sector and seeks to help the country achieve rice sufficiency by 2017 by producing 1.6 million tons of paddy (1.08 million tons of milled rice). Although earlier the government had determined that 80% of this would come from irrigated rice and 20% from upland rice, it decided to increase the share of upland rice production to 40% in 2014.

This change in strategy was largely thanks to a program supported by the United States Agency for International Development (USAID) in southern Senegal, which demonstrated that the productivity of upland rice system could be significantly improved using high-yielding varieties such as the new rice for Africa (NERICA) with good agricultural practices, mechanization, and an efficient seed system.

“However as upland rice was seen as a poor relative in Senegal, no quality seed was practically available for farmers,” explained Dr. Waly Diouf, PNAR coordinator. “Therefore, AfricaRice’s offer of seeds came at an opportune moment. We decided to distribute them to FEPROBA farmers, in collaboration with the Society for Agricultural and Industrial Development in Senegal (SODAGRI) so that they could multiply them for large-scale distribution.”

The seed growers were supported through advisory and extension services. Since the beginning of the initiative, AfricaRice has been an active partner of the government in the training of trainers, including extension agents, in improved rice production practices. According to Dr. Karim Traoré, AfricaRice Grain Quality and Seed System expert, one of the main resource persons in the training program, good quality seed is essential for farmers to have good harvests.

Improving the seed system
Anambé seed growers have been following government procedures to produce certified seed. Quality control of the seeds is done by the National Seed Division (DISEM) starting from the field. Seed samples are tested for germination, physical purity and moisture content in the government seed testing laboratory in Tambacounda.

In January 2015, a seed treatment center with a sorting capacity of 40 tons per day was established in Kolda with support from USAID. The center, which is run by a private company, certifies the seeds after cleaning, grading, and treating them at 20,000 FCFA (about US$ 33) per ton paid by the seed growers.

“We ensure that our center sends out certified seeds that farmers can count on for increasing their production,” said Mr. Baila Diop, manager of the Kolda center.

Tangible results
Within a couple of years, the Anambé valley has truly become one of the biggest suppliers of certified seed for upland rice in Senegal. “In 2015, it supplied more than 1,000 tons of upland rice seed and in 2016, nearly 2,000 tons are expected,” stated Moussa Baldé, director general of SODAGRI.

“The initiative has brought hope among FEPROBA farmers, who have understood that seed production can be a profitable business,” he added. “Our target is to supply at least 50% of certified seed needed for upland rice cultivation in Senegal by 2017.” 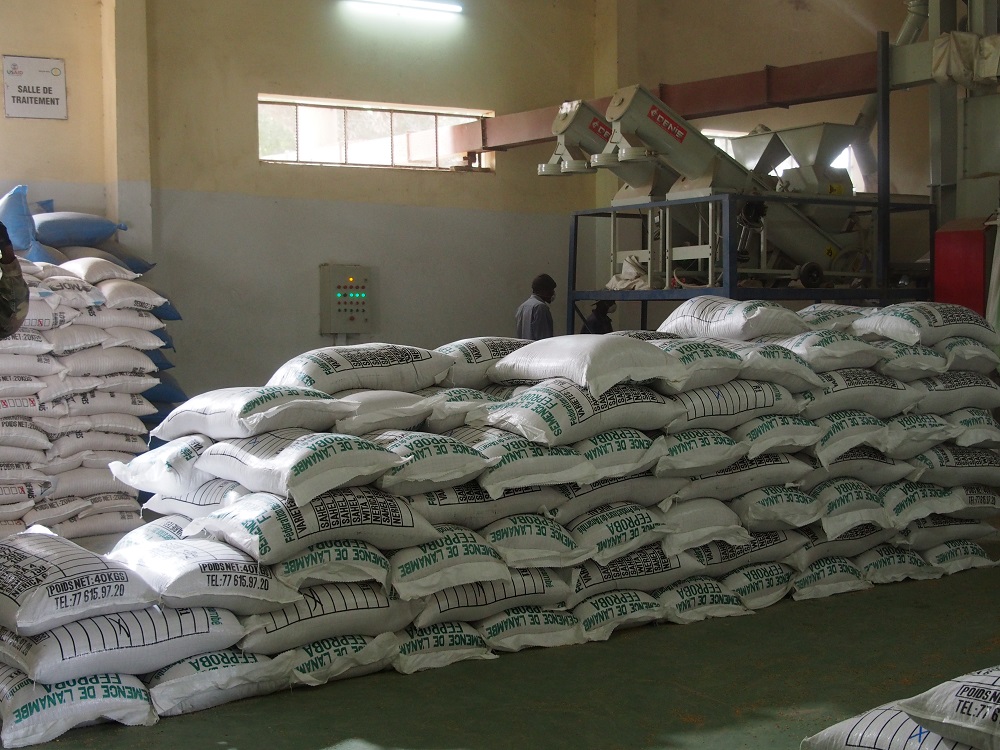 Seed growers are benefitting from the professional services of the Seed Treatment Center in Kolda. (Photo by R. Raman/AfricaRice)

The Anambé seed growers have certainly contributed to the growing success of the government’s new strategy and are fulfilling the promise of the slogan “Kolda is feeding Kolda” in rice. They are eager to do more. “We have now the supporting policies from the government. Farmers can feed Senegal without going outside for help,” said Mr. Baldé.

He and the other FEPROBA members requested the government to increase the irrigated areas as there is a high demand from a growing number of farmers who are coming to Anambé after witnessing the seed boom. They would also like to have a seed treatment center nearer the production sites and a rice processing factory.

For Dr. Diouf, the Anambé success story is a vision of the government that has come true thanks to all the research and development partners, including AfricaRice. “We were able to ensure rice self-sufficiency in Kolda within two years. We are now no longer speaking of self-sufficiency here but of prosperity. This means we have moved to a higher level of development.”