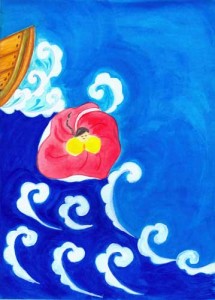 Once upon a time, about 1,700 years ago, there was a girl named Shimchung. Unfortunately, her mother passed away while giving birth to her.

Shimchung’s father, who was blind, was forced to beg for milk from the mothers around the village to keep his infant daughter alive.

The people in the village took pity on Shimchung and her father so they gave them food to survive. When Shimchung was older, she was given some menial tasks so she could earn a living. She took care of her blind father from the time she was a little girl.

One day, a Buddhist monk from a nearby temple told Shimchung that an offering of 300 suk of rice to Buddha could restore her father’s sight. Unfortunately, this was too much for Shimchung because 300 suk of rice is about 43 tons!

Then Shimchung heard that some merchants were looking for an immaculate virgin to sacrifice to the Yongwang, the god who rules the water (rivers, lakes, seas, oceans, and water creatures), to keep their voyage safe as they sail from Korea to China. Because Shimchung loved her father so much and desired nothing more than to give back his sight, she sold herself to the merchants for 300 suk of rice.

Her father protested that he would not let her go. But, Shimchung had already made up her mind out of love and sacrifice that she was even willing to give her very life. As Shimchung sailed with the merchants, she could still hear her father’s dissuasion and wailing.

When the ship was somewhere in the west of the sea called In Dhang Soo, Shimchung and the merchants encountered a powerful storm and wild waves. It was time for Shimchung to sacrifice herself to Yongwang. As she wished for her father’s sight to return, Shimchung threw herself into the wild waves. Soon after, the storm disappeared and the sea became calm and gentle. 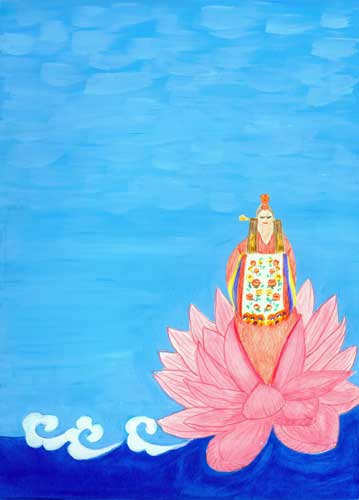 Under the sea, a turtle led Shimchung to Yongwang, who was deeply moved by her sacrifice and devotion to her father and he decided to let her live. He wrapped Shimchung in a large lotus flower, which then floated to the surface of In Dhang Soo.

The wind carried the lotus flower to a far-away land.

The people found the mysterious large flower and brought it to the emperor. Inside the palace, the giant lotus flower opened to reveal Shimchung before the emperor. The emperor immediately fell in love with her and decided to marry her.

After the wedding, Shimchung told the emperor that she wanted to see her father. So, the emperor threw a big ball at the palace for all blind people. Shimchung excitedly searched for her father among the guests. Finally, she heard her father’s voice at the gate. He arrived late because he had helped gather all the blind people and bring them to the palace.

She ran to him and greeted her father, who was still blind. Her father was bewildered for a moment but soon realized it was his daughter. He hugged her while his tears rolled on his cheeks. He touched her face again to make sure it was indeed Shimchung.

Ms. Shim-Chin was a preschool teacher in South Korea. She temporarily gave up her job in Korea to join her husband, IRRI plant breeder Joong Hyoun Chin, and her children in the Philippines. Some of her free time is devoted to painting.