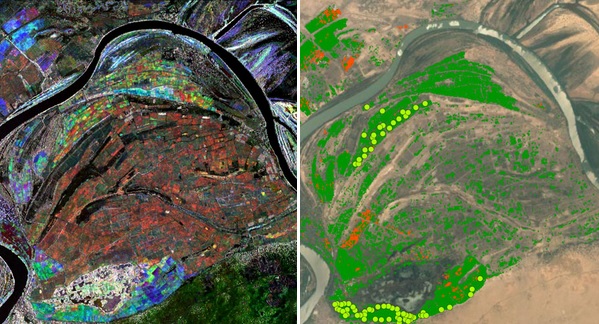 Remote sensing or satellite image interpretation is a promising alternative in getting information on where and how much rice is produced. Rice in several Asian countries has been successfully mapped already because it is usually grown in monoculture and in larger areas with flooded field conditions during land preparation.

However, a field exploration tour in Benin, during the remote sensing experts’ meeting co-organized by the International Rice Research Institute (IRRI) and the Africa Rice Center (AfricaRice) under the Global Rice Science Partnership (GRiSP), revealed that the situation in Africa can be very different from Asia. This is especially true in the rainfed areas in humid and semihumid zones, where rice cultivation is highly dynamic, spatially fragmented, and in small fields. These factors complicate the search for rice from space; thus, an alternative for mapping rice in Africa is needed.

IRRI, AfricaRice, and Swiss-based Sarmap are now working together to check whether radar remote sensing imagery can be used for mapping rice areas in Africa. They selected the Glazoué rice hub in central Benin, characterized by rainfed rice production in both uplands and lowlands, and the Fanaye rice hub in the Senegal River Valley, which is dominated by the irrigated rice ecosystem. During the rice-growing seasons, high-resolution COSMO-SkyMed radar images were taken every 16 days for both regions. Field observations of crop type were made in about 200 fields in Senegal and 300 in Benin.

In Benin, agricultural areas can be distinguished from nonagricultural areas with an accuracy of 76%, which can be improved to 85%. Eventually, the plan is to be able to distinguish rice from nonrice crops. As of now, the maps depict a tranche of the Senegal River Valley near the village of Dagana. For a small sample area, the irrigated rice areas have been mapped.

Initial results show that radar time-series data can map and monitor the conditions of African rice systems. The accuracy for irrigated rice is high in Senegal and Benin, despite the small field sizes. The challenge will be to apply this method using imagery with slightly lower spatial resolution such as what will be provided in the Sentinel program.

The end goal is to set up a mapping and monitoring system for the more than 60 rice-sector development hubs across Africa to assess the impact of the activities of AfricaRice and its national partners.

The authors acknowledge financial support from GRiSP partnership funds, general GRiSP funds provided by AfricaRice, and the RIICE project funded by the Swiss Agency for Development and Cooperation.

Dr. Zwart is a remote sensing and GIS specialist at AfricaRice. Dr. Holecz is the director of Sarmap. Dr. Nelson is a geographer and head of the GIS laboratory at IRRI. Mr. Mwambo and Ms. Adefurin are research assistants at AfricaRice.