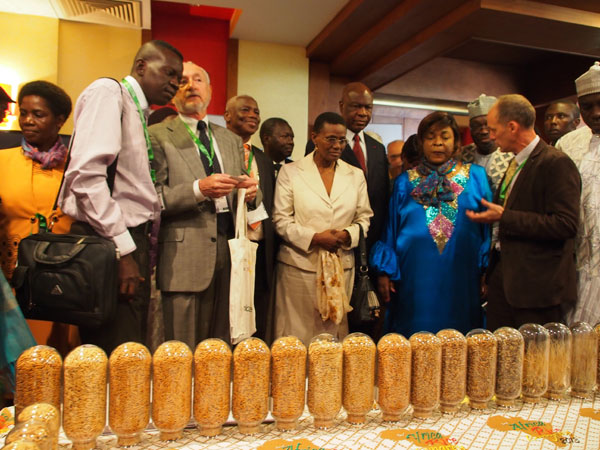 The 3rd Africa Rice Congress, held in Yaoundé, Cameroon, in October 2013, emphasized the need to invest in the modernization and mechanization of Africa’s rice industry and aggregation of farm output, while safeguarding land rights of smallholders and improving livelihoods. There was also a call to establish a world-class research infrastructure in Africa to identify rice genetic materials for resistance to major biotic and abiotic stresses and to strengthen the rice sector development hub network as well as other rice-related research, extension, and capacity building for greater and faster impact across the rice value chain.

Rice has become more critical to achieving food security and political stability on the continent. Despite rapid growth in rice production in sub-Saharan Africa (8.4% per year) from 2007 to 2012, the African continent continues to rely heavily on the world market to satisfy increasing consumption demand for rice, with imports reaching 12 million tons of milled rice in 2012, costing more than US$5 billion. 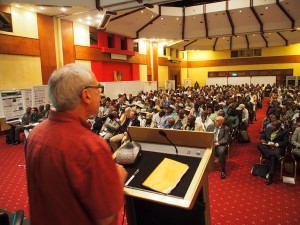 Themed Rice Science for Food Security through Smallholder and Agribusiness Development in Africa, the Congress was organized by the Africa Rice Center (AfricaRice), the Food and Agriculture Organization of the United Nations (FAO), and the Institute of Agricultural Research for Development of Cameroon (IRAD) under the aegis of the Cameroonian government.

“We recognize the need to scale up our investments for modernizing the rice sector and also increase our support to research and extension,” stated Cameroon Prime Minister Philemon Yang, in his opening message that was delivered by Cameroon Minister of Scientific Research and Innovation Dr. Madeleine Tchuinte.

The Congress took stock of advances in rice science and technology and provided opportunities to discuss institutional innovations, policies, partnerships, and investments needed to ensure that rice sector development becomes a veritable engine for smallholder and agribusiness development and economic growth in Africa.

“This will not only contribute to food security, but will also help reduce rice imports and create attractive employment across the rice value chain,” said AfricaRice Deputy Director General Marco Wopereis. “Let’s not forget that, over the next 15 years, an estimated 330 million young Africans will be looking for a job.”

These issues were debated in a Ministerial Policy Dialogue— organized with support from FAO— involving ministers from Chad, Cameroon, The Gambia, Mali, and Senegal.

Private-sector and research and development partners showcased their work in the Congress Exhibition, which featured a special section on small-scale rice mechanization. A Cameroon Rice Day allowed participants to visit the IRAD research facilities in Yaoundé. Realizing Africa’s Rice Promise, a new book jointly published by AfricaRice and CABI, was also released as part of the special events of the Congress. The book provides a comprehensive overview of Africa’s rice sector and ongoing rice research and development activities, indicating priorities for action on how to realize the promise of rice in a sustainable and equitable manner. A side event focused on a training course in science journalism relating to rice R&D activities in Africa was organized with support from the Global Rice Science Partnership (GRiSP), the CGIAR Research Program on Rice. A plaque of appreciation was presented to Cameroon President Paul Biya for the support of the Cameroon government to the rice sector. A distinguished service award was presented to Dr. Papa Abdoulaye Seck, former AfricaRice director general and current minister of agriculture and rural equipment of Senegal. 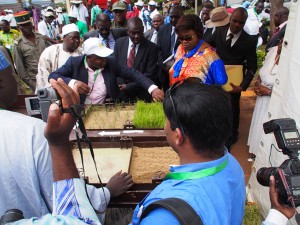 During the closing ceremony, awards were presented for best papers, best posters, most promising young scientist, and outstanding local entrepreneurs from Africa in seed production and local manufacturing of small-scale machinery.

Immediately after the closure of the Africa Rice Congress, the 2013 Global Forum of GRiSP was held, at which updates on global and African rice initiatives were presented, followed by sessions on Bilateral support for African rice and Coordinating investments in rice development in Africa involving a broad range of investors interested in Africa’s rice sector.

“Such exchanges will help us find ways to leverage opportunities and make the most of our resources and knowledge to boost Africa’s rice sector,” said GRiSP Director Bas Bouman.

Ms. Mohapatra is the head of the Marketing and Communications at AfricaRice.