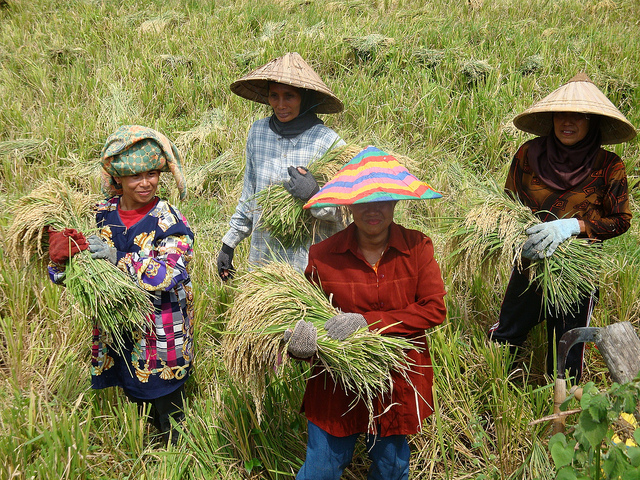 In Asia, where about 90% of rice is grown, hundreds of millions of rural poor grow rice on less than a hectare of land. 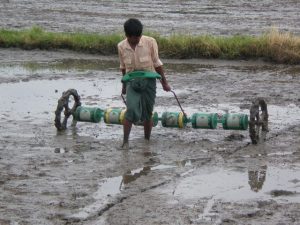 Producing affordable rice for the poor has been a challenge for the last 50 years. During the 2008 rice price crisis, changes in rice availability and price caused social unrest in some developing countries. The International Rice Research Institute (IRRI) estimates that an additional 8–10 million tons of rice need to be produced each year to keep rice prices stable.

The challenge now is to grow more rice with less land, less water, and less labor amidst climate change. A regional approach to food security In 1997, the Swiss Agency for Development and Cooperation (SDC) began funding the Irrigated Rice Research Consortium (IRRC), which provides a platform for partnership in research and extension in the intensive lowland irrigated rice-based production systems.

The IRRC develops partnerships to identify the needs of rice farmers and potential solutions to their problems, and to facilitate the adoption of suitable technologies. It provides a range of technologies for rice farmers and other stakeholders in Asia to improve their livelihoods and increase rice production to maintain food security.

Hundreds of thousands of Asian farmers are now adopting these technologies because of impressive economic, social, and environmental benefits. This article examines some of these successes. 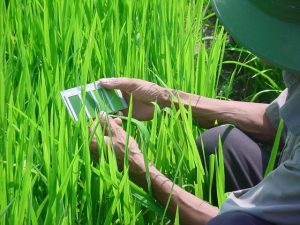 Irrigated lowland rice is usually grown under flooded conditions, and kept flooded to help control weeds and pests. However, researchers found that rice needs to be continuously flooded only at the flowering stage. Through alternate wetting and drying (AWD), a water-saving practice, fields can be dried for 1–10 days before being re-flooded. Farmers can save 15–30% of water and still harvest the same yields. The water saved can be used to irrigate more fields, thus increasing overall production. If AWD were to be adopted all across Asia, the amount of water saved in one year would equal 200 times the water consumption of Paris for a year.

Introduced in Bangladesh in 2004, AWD is now being promoted by government and nongovernment agencies. The secretary of the Ministry of Agriculture endorsed AWD in 2009, and directed the government’s Department of Agriculture and Extension (DAE) to promote the technology nationwide. Along with other agencies, the DAE promoted AWD in over 50 districts in 2010. Field studies reported a decrease in pumping cost and fuel consumption, and an increased income of US$67–97 per hectare. In 2009 alone, partners reported 120,000 farmers adopting AWD.

The private sector promotes AWD by producing tubes that are used to monitor water levels in the field. Although thousands of farmers are practicing AWD in the country, a 2010 adoption study reported that, with millions of farmers still to be reached, adoption is in its infancy.

Around 40,000 farmers in Vietnam are practicing AWD, and more farmers are expected to be reached through a new IRRC-An Giang Department of Agriculture and Rural Development initiative: the One Must Do, Five Reductions Program (see GAPs fill the gap). In 2010, Lao PDR, Indonesia, Myanmar, and Thailand started or successfully demonstrated AWD.

Most farmers lack knowledge on the most effective use of fertilizer. They either apply too much or too little, or apply it at the wrong time. Too much nitrogen fertilizer leads to increases in diseases and pests, damage to the environment, and low profit. For more than a decade, IRRI soil scientist Roland Buresh, leader of the IRRC Productivity and Sustainability Work Group, has been working with partners in Asia to provide site-specific nutrient management (SSNM) practices for rice.

Since 2003, correct fertilizer timing and application rates have greatly increased farmers’ yields compared with traditional practices. Yield increases from adopting SSNM have improved net returns by $100 to $300 per hectare per year in China, India, Indonesia, Vietnam, and the Philippines. An impact assessment study on SSNM in the Red River Delta in Vietnam revealed a 2% and 3% increase in net present values for smallholder farmers in Ha Tay and Ha Nam provinces, respectively. Farmers who used SSNM reported a reduced use of pesticides.

Encouraging farmers to use SSNM has been a challenge because it is knowledge-intensive and many factors need to be considered, such as crop yield and the use of organic materials. This has slowed down farmers’ adoption of these improved practices. 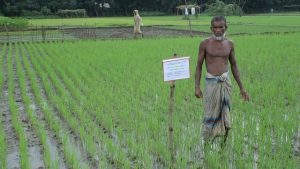 But, this speed bump did not slow down Dr. Buresh and his group, who looked for ways to make their science simpler for the farmers. The leaf color chart (LCC) was developed as a tool for farmers to assess the nitrogen needs of their crop. In Bangladesh, an estimated 600,000 farmers use LCCs, which has increased the efficiency of urea fertilizer use, enabling farmers to harvest more rice with less expense for purchased fertilizer.

Farmers learned about the use of potassium and phosphorus fertilizers, and gained new knowledge on other micronutrients. They were able to save $25 per hectare in production costs and harvested higher yields.

In 2008, SSNM principles were packed into a computer-based decision-making tool called Nutrient Manager for Rice. A farmer or extension worker only needs to answer about 15 questions and, within 5–10 minutes, a fertilizer guideline is provided for a field. In 2010, Web and mobile phone versions were developed in the Philippines. Web applications of the Nutrient Manager are now available for Guangdong, China, and Indonesia, while applications for Bangladesh, Vietnam, southern India, and West Africa are under way. Saving labor and water costs In the Indo-Gangetic Plain, which covers most of northern and eastern India, and almost all of Bangladesh, farmers face rising costs, waning productivity, worsening soil health, and labor shortages, as many people move to the cities to find work. Farmers depend on the monsoon rains, and they cannot plant if the rains come too late. 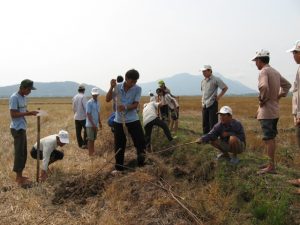 Men, women, and children—and their dogs—hunt rats together in An Giang, Vietnam. (Photo: T. Mendoza)

Led by IRRI weed scientist David Johnson, the IRRC Labor Productivity and Community Ecology Work Group promotes direct seeding of rice as an alternative way to establish a crop. In direct seeding, pregerminated seeds are sown directly into a nonflooded but saturated field, using a drum seeder. Direct seeding allows quicker land preparation, and farmers can save 20% in labor costs and 30% in water costs. It takes 50 person-days to transplant a hectare of rice, but it takes only 2 person-days to directly seed using a drum seeder. (See Farmers get their groove back and Drumming up success.)

Mr. Singleton is a principal scientist at IRRI and an expert on rodent biology and management.