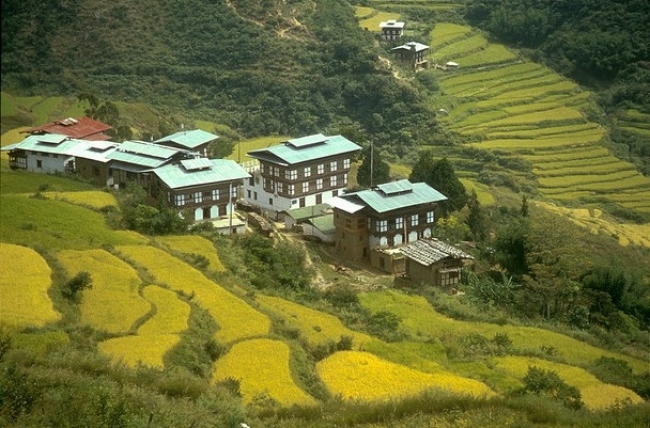 Imagine, for a moment, that you are a Bhutanese farmer. Farming has been in your family for generations. You manage your farm now in the same way your father, and his father, managed the land. The other farmers in your village run things in much the same way. As far as you know, it has always been thus.

Since you took the reins from your father, you have grown rice and a few other crops in high-altitude, terraced wetland irrigated by water from a nearby stream. But in the last few years things have started to go awry. You struggle to get enough water to transplant your rice on time. Farmers from a neighboring village, situated farther up the mountainside, divert almost all the stream’s water into their crops. You know this isn’t fair, but your hands are tied but nothing is changing. How do you change things so that all the people have what they need?

Lately, the dearth of water has been worse than usual, and the situation has become volatile. Tempers are fraying, but nothing is changing. How do you change things so that all the people have what they need?

This scenario is not uncommon in Bhutan. A fifth of the farming households in this small, mountainous kingdom northeast of India cite access to irrigation water as a major constraint to agricultural production. In recent years, the system of customary rights to natural resources that has served Bhutan for centuries has become bumpier as the previously unfelt influences of economic development, commercialization and globalization have distorted age-old traditions.Conflict over resources is bringing about social tensions across whole societies. In the past few years, however, one approach has emerged that may help to quell confrontation.

Agricultural scientists François Bousquet and Guy Trébuil— seconded in 2001-04 to the International Rice Research Institute (IRRI) Social Sciences Division from the French Agricultural Research Centre for International Development (Cirad by its French acronym)— have set about implementing an innovative method for managing renewable resources in Asia.

Starting in June 2001, Drs.Bousquet and Trébuil helped their colleagues from the national agricultural systems of Bhutan, Thailand, the Philippines, Vietnam and Indonesia to investigate resource management problems in rice-growing communities.

To do this, they used the so-called companion modeling approach to test the effectiveness of their research methods and consequently improve them.

Companion modeling — known appropriately as ComMod, which means “convenient” in the native tongue of Drs. Trébuil and Bousquet — uses a combination of field surveys, role-playing and simple computer models that simulate different members of a community and their interactions when exploiting a common environment.

ComMod allows all the people affected by a community problem to examine it together and build a shared understanding of its nature and causes. They can then use ComMod simulations to find acceptable solutions. The trick is to ensure sustainable use and equitable distribution of resources. Easier said than done, to be sure, but it’s not all hard work. At least some of it is, quite literally, fun and games.