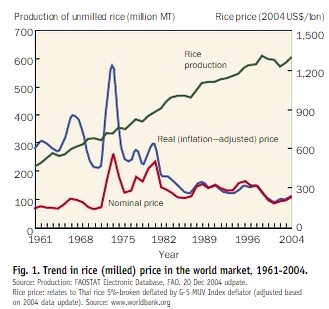 The price of rice has consistently fallen over the last 40 years. Since the beginnings of the Green Revolution in the mid-1960s, the real (inflation-adjusted) price of rice in the world market has been more than halved while global rice production has increased (Figure 1).

This movement in price has not been smooth. An upward trend during the oil crisis in 1973-75 was followed by a sharp downturn in 1980-87 due to the rapid expansion of rice production in China and the devaluation of the Thai baht. Thailand is the world’s leading rice exporter and global rice prices, which are set in U.S. dollars, are strongly tied to the baht.

Is this long-term decline in the price of developing countries’ dominant food staple good or bad news for food security and poverty reduction? In low-income Asian countries, governments tend to prefer lower prices. Among the poor, there are far more net buyers of rice than net sellers. In many countries, the landless poor — who meet their entire food needs from the market — constitute one-third to one-half of the population. Add to this a large proportion of equally poor urban laborers and you have a vast majority of the poor who spend more than a third of their income on staple food.

Because people rightly place a high priority on their basic food needs, any increase in rice price means less money for other needs, such as health care and children’s education. Keeping staple food prices affordable is therefore crucial to poverty reduction, good health and continued education.

But price trends raise as many questions as they answer. How do falling prices affect Asia’s millions of rice farmers and farm families? What would motivate people to continue farming in the face of declining profitability? And how can prices stay low if the supply fails to keep pace with demand? 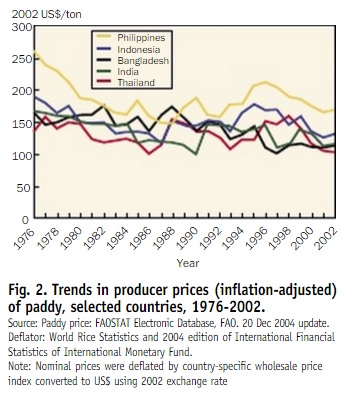 First, the world market price of rice in dollars is a poor indicator of profitability in the domestic  market. For example, the exchange rate of the Thai baht fell from 21 per dollar in 1965 to 43 per dollar in 2002. Thus, Thai farmers who exported rice in 2002 effectively received more than double the price obtained by their 1965 counterparts, which compensated them for the drop in price on the world market. Indeed, an examination of the inflation-adjusted producer price of paddy (unhusked rice) in the domestic market shows a relatively small decline in price over the past few decades (Figure 2).

Second, lower prices do not necessarily mean lower profitability. The main factor driving the long-term decline in agricultural prices is technological progress that contributes to a drop in the unit cost of production.

Despite the higher cultivation costs of modern rice varieties, their higher yields mean lower costs for farmers per ton of harvested rice. This effect is amplified by improved crop management and mechanization, which also cut production costs. These lower prices help redistribute to consumers some of the gains that farmers reap from technological progress.

Farmers in many countries continue to increase their rice production despite the decline in prices, indicating that rice farming is still economically viable. If prices fall too fast, a period of stagnation or decline in production follows, as was seen in 1998-2003. But the shortage of production leads to a rise in prices, thus restoring farmers’ incentives. The last two years have seen an increasing world rice price that should offer rice farmers sufficient motivation to continue.