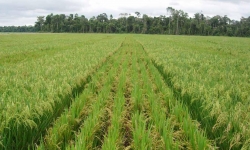 The Embrapa-Cirad hybrid seed production system in upland conditions at Sinop, Mato Grosso. Worldwide, rice is an important staple food for billions of people. Since the demand for rice is projected to surpass supply eventually, researchers are challenged to develop ways to increase rice yield sustainability.

In China, hybrid rice covers about 60% of the total rice area, which thereby shows that this technology may represent one of the main strategies to meet the increasing demand (see Hybridizing the world).

In Brazil, however, hybrid rice covers only about 2% of the total rice area and, therefore, it has considerable potential for growth.

In contrast to the Chinese technology of producing hybrid rice seed, which is based on hand-transplanting in small parcels, in Brazil, a high cross fertilization rate is desired, so it is essential that the parental lines have their flowering period synchronized by having the same vegetative cycle. As a result, extensive areas can be planted in a single operation, thus reducing costs. The success of this technology has a direct impact on the final cost of seeds, whose high prices are often one of the main constraints to adoption.

Moreover, this new seed production system in the upland conditions of Mato Grosso, in west-central Brazil, helped reduce the average market price of hybrid seeds. Notably, in Brazil, hybrid rice seed prices are about eight times higher than those of conventional seed. Hybrid rice seed sells for approximately US$8 per kilogram, thus making the technology almost out of reach for small farmers.

Furthermore, the new relationship model adopted between the Brazilian Agricultural Research Corporation (Embrapa) and its licensees involves close monitoring and intense training, which is a production system far more complex than that required for conventional seeds.

Meeting standards
Hybrid rice varieties have been made available to Brazilian farmers since 2003 by a private company. Yet, one of the greatest challenges for hybrids is to achieve the quality standards demanded by the Brazilian rice industry, especially in terms of head rice rate and cooking quality. This may be due to the stronger focus on yield adopted by most research programs. Nevertheless, yield in Brazil averages 76 tons per hectare under the irrigated conditions of Rio Grande do Sul and 3 tons per hectare in the upland production system of Mato Grosso.

Embrapa and the French Centre de Coopération Internationale en Recherche Agronomique pour le Développement (CIRAD) have established a partnership in order to research and develop hybrid rice of superior yield compared with conventional varieties, and with highquality grain. In 2010, Embrapa and CIRAD released their first hybrid rice cultivar, named BRSCIRAD 302. It can yield up to 13 tons per hectare, with a head rice rate of about 64%, a smooth husk, and excellent cooking quality.

The cultivar was recommended to the southern state of Rio Grande do Sul to be grown under irrigated conditions. To assess BRSCIRAD 302´s overall market performance further, and, aware of the existing negative perception on the quality of hybrid grains among the rice industry and growers alike, the Embrapa-CIRAD team carried out a two-round test with six large rice mills, to which coded BRSCIRAD 302 samples were sent. The results confirmed that the cultivar had an exceedingly high head rice rate, and very good cooking and visual qualities.

And, to understand better the concerns and prejudices about hybrid rice seeds, a survey and a focus group discussion were conducted in 2009-10 among growers from the main rice-producing area in the country. The results proved useful for designing a marketing strategy for the product.

“The perfect marriage between grain quality and yield” was the advertising slogan for BRSCIRAD 302, which was officially introduced in May 2010 at the 20th Fenarroz, a well-known national Brazilian rice fair. The launch was followed by direct marketing, broadcasting on radio stations, and advertising in local magazines and on rural Web sites. Also, several press releases were issued to supply ample knowledge to farmers and to motivate future adoption. The Web site turned out to be an excellent channel for selling seeds as it facilitated contact between farmers and seed sellers. In fact, almost half of the sales came from growers who registered online.

Hybrids for the uplands
More developments are expected in 2011. BRSCIRAD 302 has been tested in upland conditions and the results are promising. In Sinop, in the state of Mato Grosso, production has reached 5 tons per hectare, a 40% increase over the average yield of conventional upland rice varieties. Today, Brazil has 1.4 million hectares of upland rice area.

The first BRSCIRAD 302 harvest began in March 2011. Some farmers reportedly faced hard negotiations with the rice industry because of the negative image that dogged hybrids in the market. Again, the preparation work proved to be worthwhile. Once they were able to appeal to the positive results of BRSCIRAD 302´s performance produced by the rice mills themselves, farmers were able to sell their produce without the usual price discounts given to low-quality grains.

Seed trials
Brazilian farmers usually test a new seed technology before deciding to adopt it on a larger scale. In its first year, BRSCIRAD 302 was tried in small areas by nearly every grower who had bought it. A good example of this took place at the Cooperative of Alegrete–CAAL, one of the many rice farmer cooperatives in Rio Grande do Sul. In order to assess the value of the different commercially available hybrid seeds, 20 hectares were planted with BRSCIRAD 302 under varying soil conditions at six associated farms. On 22 April 2011, CAAL organized a field day to show these varieties to farmers and the local press. According to Mr. Luciano Freitas, CAAL´s manager, this is a traditional strategy and the cooperative was very pleased with BRSCIRAD 302´s results. A marketing survey made among BRSCIRAD 302 grain producers has shown that many are satisfied with the yield and other plant aspects such as development, disease resistance, and lodging.

The history of hybrid seeds, their high prices, and mistrust in the industry show that adoption of hybrid rice technology in Brazil is likely to be slow. However, given the increasing number of companies in the business (two other private organizations also released hybrid varieties in 2011), it is reasonable to expect improvement from now on.