Farmers in North America met the pressing competitive challenges they faced in the late 19th century through a disruptive innovation in cultivation technology that offered a stark alternative to any of the cultivation schemes that farmers had ever developed anywhere else in the world. 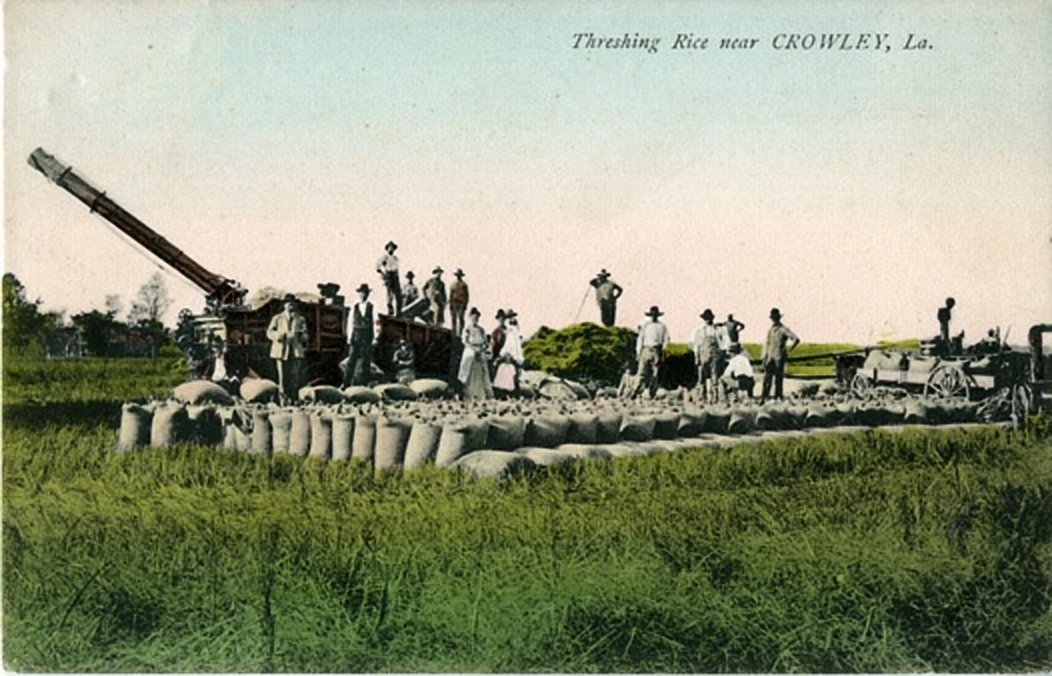 Threshing rice near Crowley, Louisiana. (Image courtesy of the Center for Louisiana Studies, University of Louisiana at Lafayette.)

Much has been written about the daunting problems relating to food production and food security we shall face in the next thirty or forty years. Meeting the food needs of the world’s growing population would be difficult enough in and of itself. But because the world’s population is becoming wealthier, demand will likely increase for resource-intensive foods (meat and dairy products) just as resources are coming under increasing pressure and with everything compounded by climate change.

However sobering the above scenario, history provides a margin of hope that we shall be able to meet the challenges ahead.  Take climate change, for example.  However, problematic the issue seems to us today, it is useful to note that during the 19th and 20th centuries, North American wheat farmers vastly extended the range of wheat cultivation northward and southward through biological innovation, that is to say, through the development of new varieties for areas once thought, as Alan Olmstead and Paul Rhode have put it, “too arid, too variable, and too harsh to farm.” This suggests that we can also adjust to hotter temperatures and climates subject to greater variability.

Here, we offer another historical example, involving rice rather than wheat production and mechanical and organizational rather than biological innovations.  What we find is that farmers, again in North America, met the pressing competitive challenges they faced in the late 19th century through a disruptive innovation in cultivation technology that offered a stark alternative to any of the cultivation schemes that farmers had ever developed anywhere else in the world.  Innovations as disruptive as the “rice revolution” in the United States between 1885 and 1915 are not common in history, but they do occur from time to time. The case laid out here suggests that, under the right conditions, a similar disruptive breakthrough—whether due to genetic modification, gene editing, “factory” foods, changes in diets, or something else—is possible and perhaps even likely in the decades ahead. 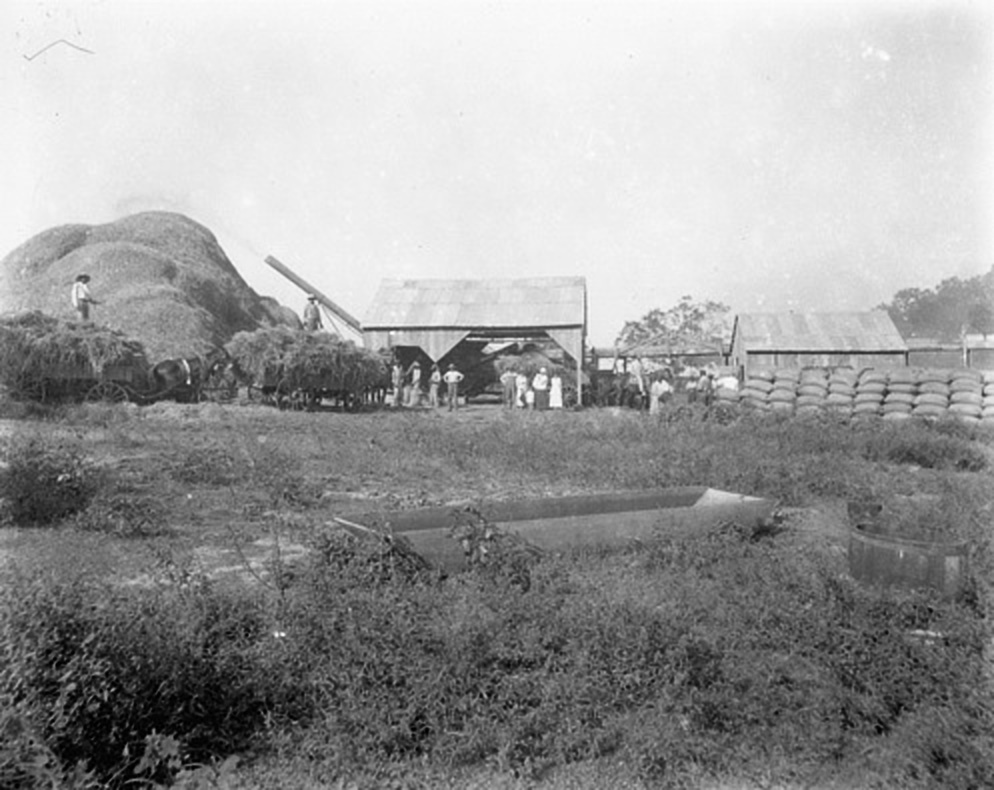 American rice revolution
The so-called rice revolution occurred in the western part of the U.S. South—in southwestern Louisiana, southeastern Texas, and east-central Arkansas—and, slightly later, in the Sacramento Valley of California. The “revolutionary” development in these areas between 1885 and 1915 was the transformation of rice production from a labor-intensive cultivation regime, employing little mechanized equipment, into a capital-intensive system wherein rice was cultivated on a large-scale in a mechanized way with little labor.  In a sense, then, the revolution turned into wheat.

Few people in the U.S.  today realize that the country is a significant rice producer and one of the world’s leading rice exporters, ranking sixth in 2017-2018.  Fewer still are aware of the fact that rice has been produced commercially in large quantities in the country for hundreds of years.  The history of the U.S. rice industry can be divided into two phases.  The “traditional” phase began in the 1690s and lasted until the mid-1880s.  During this phase, production was centered along the southeastern coast in what is now South Carolina and Georgia.  Most rice production in this area was labor-intensive and was sited almost entirely in irrigated paddy swamps.  As such, it was similar to cultivation in many other parts of the world at the time, the main difference being that it was not grown on small farms, but largely for export purposes on large capitalistic plantations worked almost entirely by enslaved Africans until slavery was abolished in the U.S. in the mid-1860s and thereafter as free laborers under tight legal controls.

By the middle of the eighteenth century, this area had become the leading source of rice supply for  Europe and America. But during the second quarter of the 19th Century, its competitiveness was increasingly challenged by cheaper rice flowing into Western markets from Asia, first from Bengal and Java, and later and more emphatically from Burma (now Myanmar), Siam (now Thailand), and Cochinchina (the southern part of Vietnam) as well.

U.S. rice had lost its preeminent position in the leading markets in northern Europe well before the beginning of the American Civil War in 1861. The disruptions and dislocations occasioned by the war itself (1861-1865) and the subsequent emancipation of the industry’s slave labor force rendered rice production in this area increasingly untenable.  By the 1880s, it was in sharp decline, unable to compete with cheaper Asian rice in a rapidly integrating world rice market. 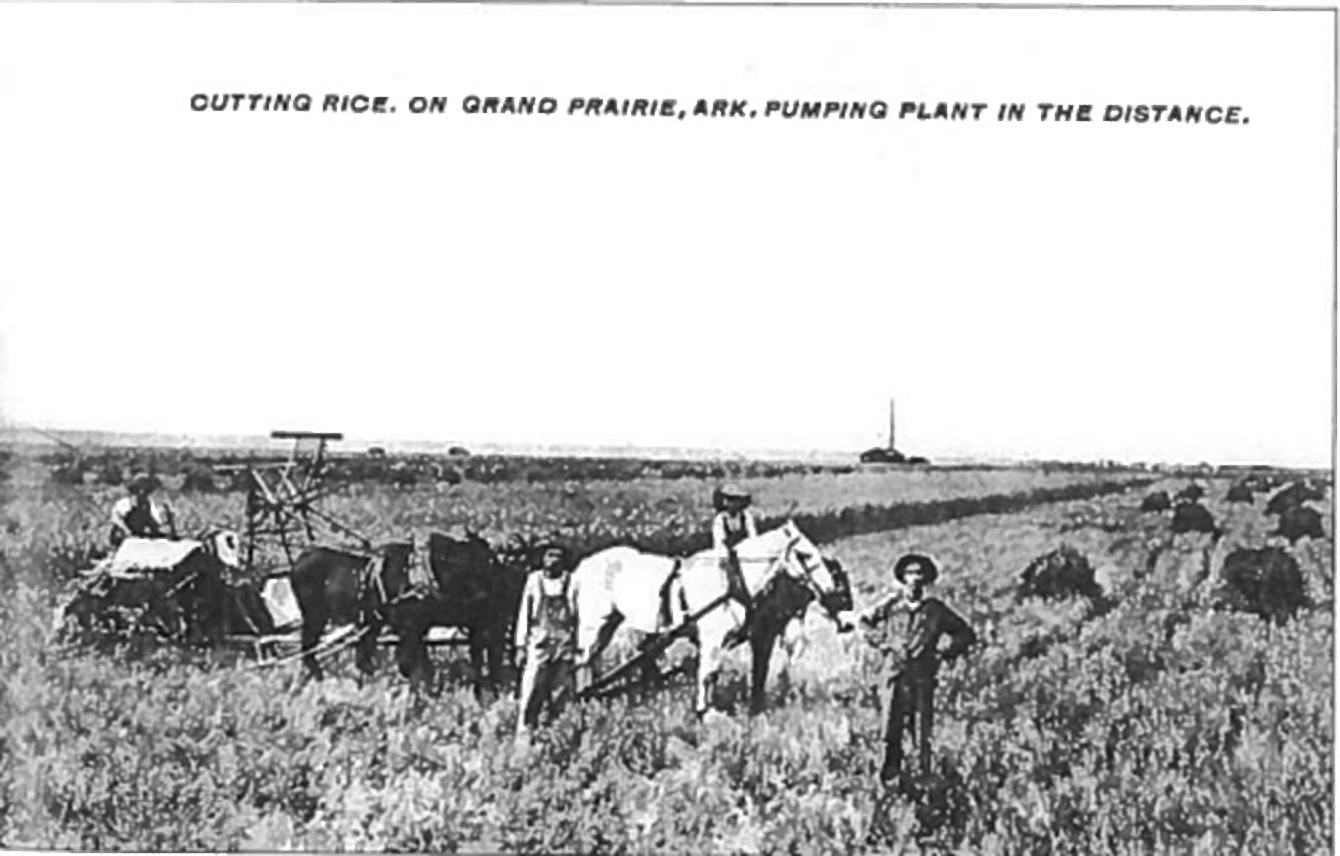 A “new” U.S. rice industry
During the mid-1880s, however, a “new” U.S. rice industry was created further west, ushering in the second phase of production in the country.  Rice labor had proven too costly to compete with production emanating from Asia, and the principals who created the new industry that emerged in Louisiana, Texas, Arkansas, and California between 1885-1915—Seaman A. Knapp, Jabez B. Watkins, and Sylvester L. Cary were the most prominent—came up with a radically new way to produce rice which minimized the use of labor, thereby reducing costs sufficiently to allow American rice to compete again internationally.

What the creators of the new rice industry did was to replace relatively scarce, expensive labor with more abundant and relatively cheaper factors of production: land and capital.  In this, they anticipated and put into place a cultivation scheme consistent with the assumptions of the famous and hugely influential Hayami-Ruttan model of induced innovation first articulated in the 1960s.  According to this model, as a factor of production becomes scarce, costly, or insufficient, a new technology that economizes on the use of that factor is induced to develop generally facilitated by a range of public and private institutions.

In the case of U.S. rice during its second phase, a new production platform was established in the 1880s on cheap, undeveloped, and underdeveloped land suitable for the crop  in the western part of the American south.  This area was blessed with abundant supplies of readily accessible water, fertile hardpan clay soils that could hold water, and sufficient transportation, financing, and marketing infrastructure nearby (particularly in New Orleans early on).

Interestingly enough, the platform was not put into place primarily by locals but by densely networked migrants from heavily commercialized agricultural areas in the U.S. Midwest as well as similarly inclined migrants from Europe, especially from England and Germany.  These networks were comprised of agricultural promoters and speculators, financiers, commercial farmers, railroad companies, and private and public scientists, including some with the U.S. Department of Agriculture.  A variety of crops was tried out in the area as part of the post-migration “discovery” process but rice was quickly seized upon as the most promising. 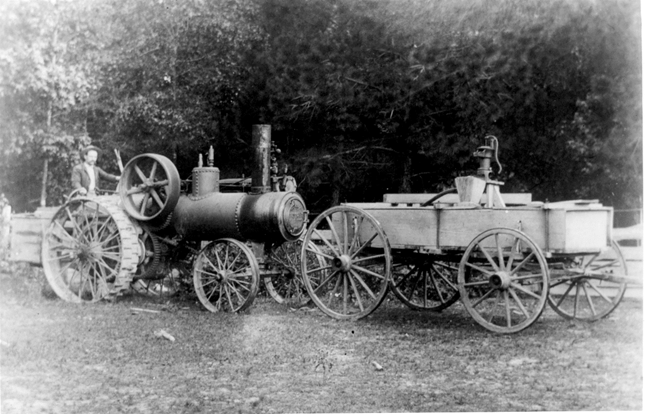 Mechanization: a new way to produce rice
Because labor was scarce and expensive, land was incredibly abundant and cheap, and many of the principals involved were once large-scale wheat and maize farmers from the Midwest  the migrants decided in relatively short order to try to adapt to rice the large-scale, heavily mechanized, capital- intensive cultivation schemes with which they were already familiar.  After some experimentation, field trials, and the unblocking of several production bottlenecks they succeeded beginning in the mid-1880s, and, in so doing, established a scheme for producing rice never used before in human history: cultivating rice, not labor-intensively in small paddy squares, but in a capital-intensive way with heavy investment in both machinery repurposed from wheat and irrigation works and with little labor on huge irrigated prairie plots.

This new production regime led to drastic reductions in labor inputs in comparison to rice-production systems elsewhere in the world.  In 1900, for example, one rice worker in Spain and Italy typically cultivated a little over 2 hectares of rice; about 1.2 hectares in Thailand and India; 1 hectare in the Philippines; 0.2 to 1 hectare in China; and 0.2 hectares in Japan. Under the new capital-intensive and highly mechanized scheme in southwest Louisiana, one rice farmer could cultivate over 40 hectares of rice land.

To be sure, wage rates for rice workers were by far the highest in the world at the time and yields per hectare were lower under the new system than in more labor-intensive schemes.  But the amount of cheap, fertile land that one worker could farm in southwest Louisiana assured output levels that more than made up for both costlier labor and smaller yields per hectare.  And mechanized rice production was only in its infancy c. 1900.  Today, using the best equipment and following best practices, one farmer in east-central Arkansas—the heart of the U.S. rice industry—can cultivate between 400 and 500 hectares or rice, with a bit of help intermittently on the pumping equipment used for irrigation and/or during the brief harvest “season.”

The new regime saved a collapsing U.S. rice industry.  Between 1750 and 1860, the U.S. was a major rice exporter but was a net importer of significant quantities of rice between the 1860s and World War I.  As the new rice production regime in the U.S. grew and matured in the decades after the Great War—adding sizable investments in biological innovation to its technological portfolio—the U.S. once again became a major exporter and has remained one to the present day.  Thanks mainly to the rice revolution of the late 19th century. 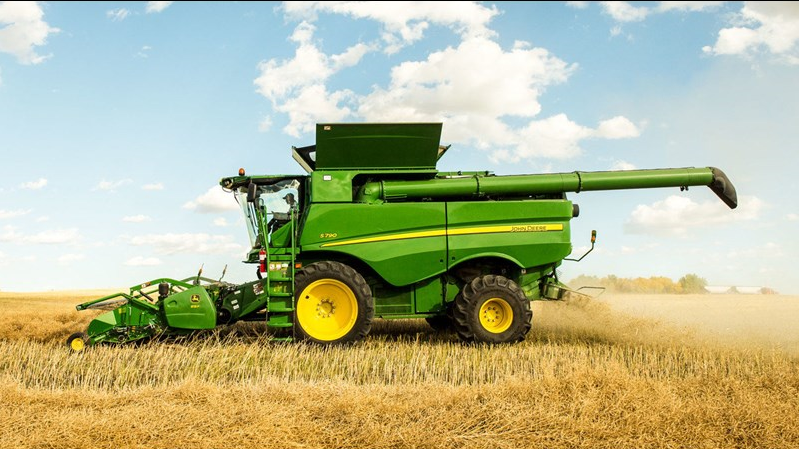 A harmonic convergence
For many years after the installation of the new scheme in the 1885-1915 period, large-scale, capital-intensive rice cultivation on irrigated prairies (in a manner similar to wheat cultivation in many ways) was unique to the U.S.  Early attempts to transfer the technology elsewhere failed, most notably, the Dutch attempt in the early 1920s on the island of Sumatra.  Beginning in the 1940s, though, Australia experienced some success with such a scheme and, in subsequent decades, cultivators in other areas have sometimes successfully followed suit.  That said, most of the world’s rice is still grown on a small scale in labor-intensive paddy plots.

Perhaps more than anything else, the case presented here demonstrates that developing disruptive technology—whether biological, mechanical, or organizational—is difficult and transferring that technology is difficult, too. The rice revolution in the U.S. reflected a set of challenges and opportunities that fortuitously converged at a time when networks of people with the right skills, mentalities, resources, and support were in place to seize the day.  This technology, and presumably others, still offer considerable upside possibilities should an equally fortuitous set of circumstances—a harmonic convergence, as it were—fall into place again.

__________________
Dr. Coclanis is Albert R. Newsome Distinguished Professor of History and director of the Global Research Institute at the University of North Carolina-Chapel Hill.  A version of this essay was presented at the 5th International Rice Congress in Singapore on 16 October 2018.