The journey of tribal farmers in Tamil Nadu, India who escaped the clutches of debt by pursuing a well-coordinated conversion to organic farming 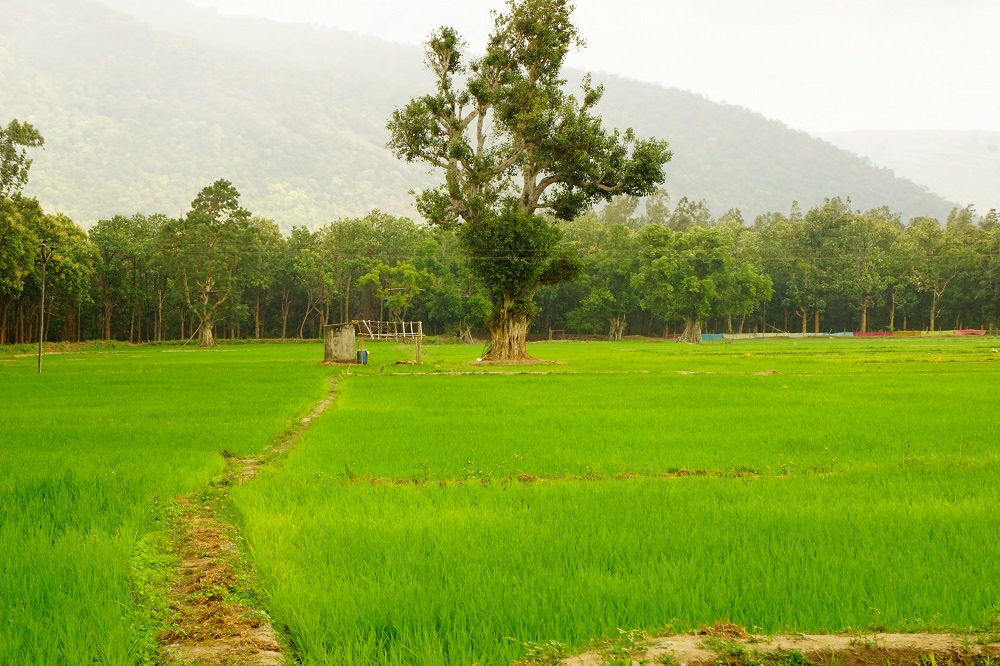 Once on the verge of collapse, the farmers of Sadivayal have turned their fate around and now the village has become a role model in the region. (Photo: Amrita SeRVe©)

.
Located in the midst of a natural reserve forest of Bholapatti Range on the outskirts of Coimbatore in Tamil Nadu, the people of the tribal farming community of Sadivayal were left to fend for themselves as urbanization was propelled forward with India’s rapid economic development. For generations, the men and women of Sadivayal have survived on agriculture. But, in recent years farming has become unprofitable.

They had been incurring financial losses over many years under the burden of the ever-increasing costs of crop seeds, fertilizers, and pesticides. This forced families in need into the scrupulous hands of illicit money lenders who thrived on their despair because of a banking system that shuts out the poor without collateral.

Creating self-reliant communities
Amrita SeRVe (which stands for Self-Reliant Village) is a rural development project under the Mata Amritanandamayi Math, an international charitable organization aimed at the spiritual and material upliftment of humankind following the guidance of its leader Sri Mata Amritanandamayi Devi. With headquarters in the Amritapuri Ashram in Kerala, the program operates in some of the most impoverished villages in 21 states across India to restore their original vibrancy and prosperity.

Hearing of the plight of the farmers’ in Sadivayal, Amrita SeRVe came to the village in early 2016 where it found a community with little money and employment. At that time, the agricultural fields, for which the families id not even have land deeds, had been abandoned for three years. Alcoholism was widespread and the pressures of debt and hopelessness frequently translated into arguments and fights. The villagers had lost their sense of direction and lived under conditions of extreme poverty. 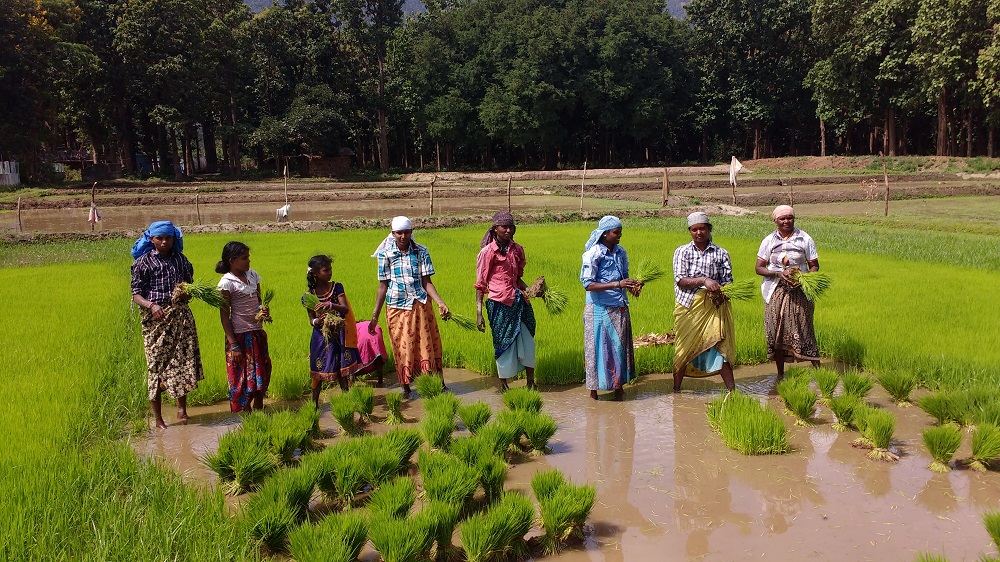 Some members of Amrita Vyavasayam Kulu, a group of farming families in the village. (Photo: Amrita SeRVe©)

..
Rebuilding from the ground up
After understanding the miserable situation of the farmers, a plan was drawn to revive the community’s agriculture from the ground up. The first step was the formation of a farmers’ group–the very first Amrita Vyavasayam Kulu–comprising of 20 of the most deprived farming families in the village.

Collectively, the group owns about 16 hectares of fertile farmlands that rely entirely on rain for irrigation. The members themselves defined their responsibilities and formulated guidelines for internal management. With guidance from Amrita SeRVe, they started with activities like selecting crop varieties, soil testing, seed testing, crop planning, and water budgeting and conservation measures. Every step was discussed by the group to find solutions.

Among the first priorities was securing a reliable water source that will guarantee sufficient irrigation for the water-intensive cultivation of rice. The group decided to reinstate a natural canal from a water source on top of a mountain 2.5 kilometers away. This endeavor would also provide jobs for other people in the village. Also, applications for land deeds and a joint group bank account were submitted so that they can become eligible for agricultural government schemes.

The group availed of subsidies for renting a tractor used for tillage, obtained new seeds from Tamil Nadu Agricultural University, and Department of Science and Technology-funded initiatives from the government, non-government organizations, and farmers coming together known as the convergence method. 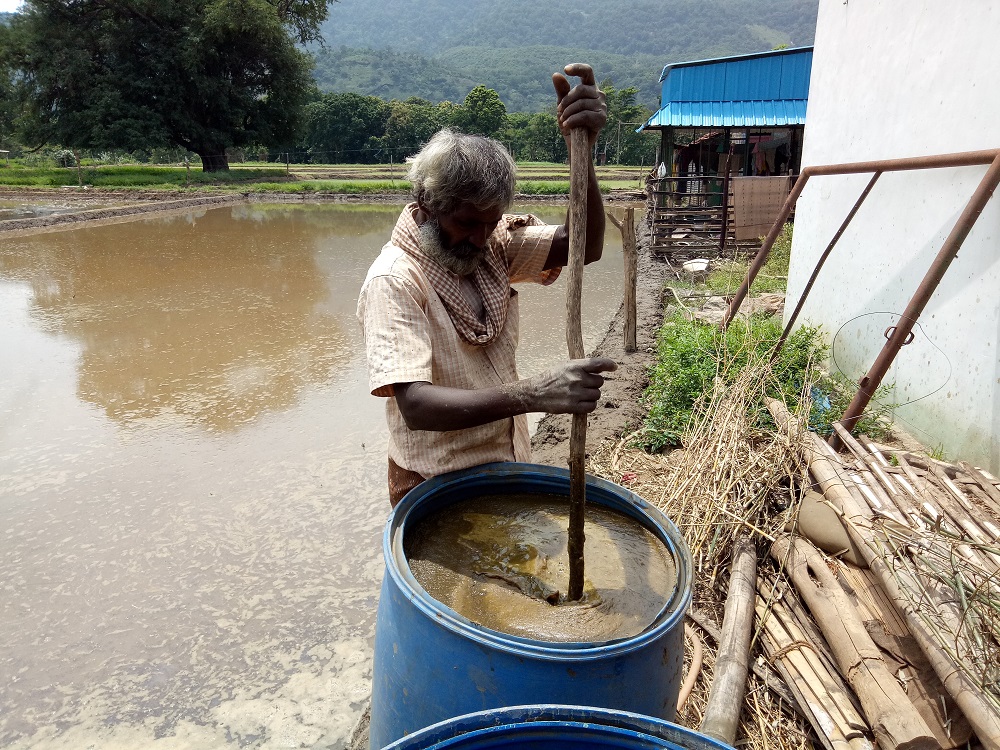 More sustainable future
Because the cost of and the dependence on agricultural chemicals can often drive marginal farmers into losses, it became clear that organic farming is a more sustainable future for the group. Amrita SeRVe provided the farmers with training in preparing natural pesticides and fertilizers such as Jeevamirtham (a mixture of cow dung and urine, legume powder, and jaggery) as well as seed treatment using an ancient recipe called Beejamrutha (a mix of cow dung and urine, water, lime, and soil).  The farmers, in turn, responded with maximum participation and the faith that through this new venture the livelihood of their entire village could be restored and a brighter future would await them.

“We took a chance and tried something different,” said the late Mr. Rajan, a founding member of Amrita VyavasayamKulu. “The result was selling a new crop for double the price of anything we had grown before. Not only that. The seeds we planted gave us a double yield.”

In June 2016, the farmers planted nearly 600 kilograms of organic Bhavani rice on their joint land. In accordance with their customs, a ritual of worship was performed by the fields to imbibe blessings from Devi, their patron deity.

“At first we were unsure and more than a little tensed,” said Kaliswami, a member of the farmers’ group. “But once we started to see the first rice sprouts spring from the ground, we knew success was on its way.”

But more investments were needed to provide for the security of their fields after sowing the crop. In the past, wild animals, including monkeys, wild pigs, and elephants have caused serious damage to their crops. Over the years this threat would prove to be one of their challenges. That year, a shelter overseeing the field was erected. Two farmers were assigned to be on the lookout day and night for any wild intruders during critical periods of the crops.

Reaping the bounty
After the first harvest in January 2017, it became clear that all their hard efforts had come to fruition. The farmers’ initial costs had been dramatically reduced by converting entirely to organic practices, availing of government schemes, and securing irrigation with the hand-dug canal. Thanks to this convergence approach, the Sadivayal farmers harvested their first profitable crop in five years. They saw a phenomenal increase in net income–from a loss of more than USD 300 in the earlier years to a profit of USD 380 per hectare–using natural farming methods.

Another contributing factor to profitability was the adoption of postharvest techniques such as cutting, cleaning, and sorting. This not only increased the market value of their rice. It also allowed them to sell their organic rice paddy that is always in high demand.

The key to selling their goods is marketing. But the isolated villagers commonly struggle with agriculture marketing and access to the market. With the help of Amrita SeRVe, the farmers’ group identified direct bulk buyers at the big markets thus removing the need for middlemen. As a result, the farmers were able to repay all their debts to moneylenders with the earnings from just one successful season.

The following season, the farmers decided to expand their operation to 16 hectares by reclaiming barren land. In January 2019, they have harvested their third fully organic crop. 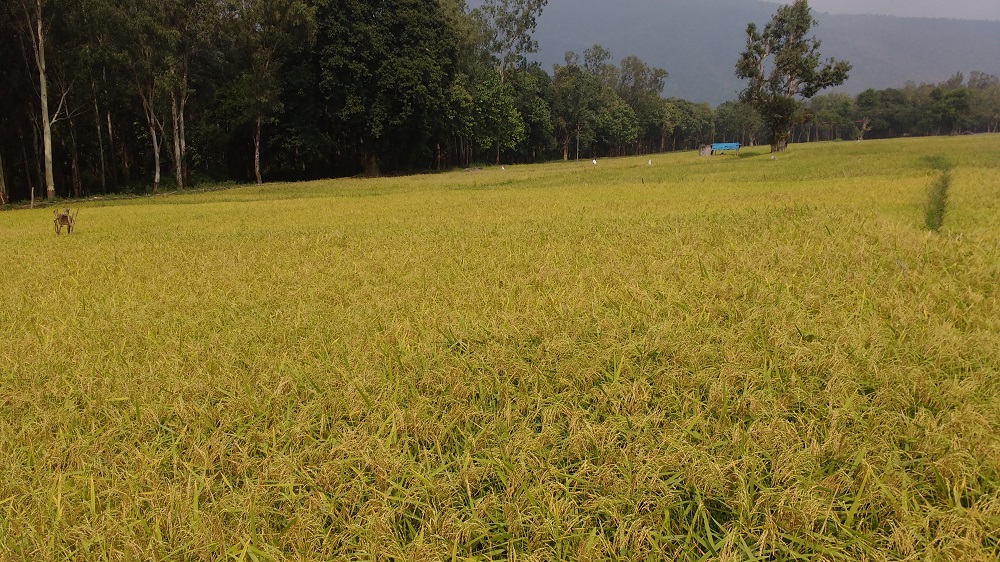 The Sadivayal farmers’ efforts were rewarded by a bountiful first harvest in January 2017, their first profitable crop in five years. (Photo: Amrita SeRVe©)

.
Model for progress
This great success has attracted the attention of several government officials who visited the farmers of Sadivayal, promising to support similar initiatives with more subsidies. Plans for a long trench surrounding the fields were also sanctioned by the local forest department to protect their crops from wild elephants in the future.

Now the village has also become a role model in the region. The farmers of Sadivayal are in a position to train farmers in nearby districts who are interested in learning the natural methods of agriculture. Within two years, some 60 hectares of fallow land in five villages nearby were converted to rice fields using a similar approach.

“We are committed to continuing with organic farming,’ Kaliswami, member of Amrita Vyavasayam Kulu. “It won’t be easy. We know there are challenges. The soil needs to be revived after decades of chemical use, and that will take a couple of years. But we have to continue this practice to heal the soil.” 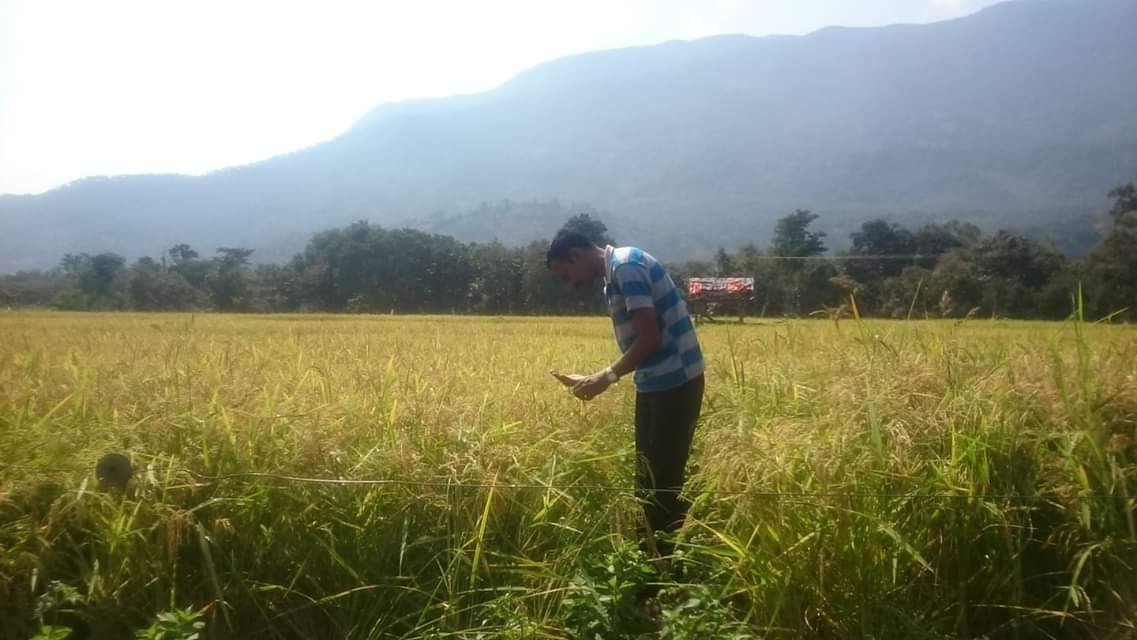 A life of hope
Over the course of three fruitful years, life in Sadivayal has changed dramatically–this time for good! Banks have opened their doors to the farmers. Along with their confidence and improved relationships with the local forestry department, most people in the village got second jobs to earn additional income in the forest or nearby lands. Alcoholism and fighting have been reduced drastically. More importantly, they recovered their confidence and self-respect.

The farmers of Sadivayal have turned their fate around thanks to the inspiration, organization, and perseverance of Amrita SeRVe, under its agricultural program manager Sreeni K.R. With other government projects underway, including the construction of a check dam and warehouses, as well as efforts to secure organic certification, the air is energized with the hope of rebuilding a prosperous agricultural sector on the inclusive methods of a long-standing tradition of natural farming.
___________________
Mr. Heyne is the communications officer at Amrita SeRVe