The International Rice Genebank at the International Rice Research Institute (IRRI) made worldwide headlines when it received permanent funding from the Global Crop Diversity Trust (Crop Trust). The landmark grant enables IRRI to harness the extensive wealth of rice genetic resources preserved in its vault to help feed a growing global population in a safe, nutritious, and sustainable manner. 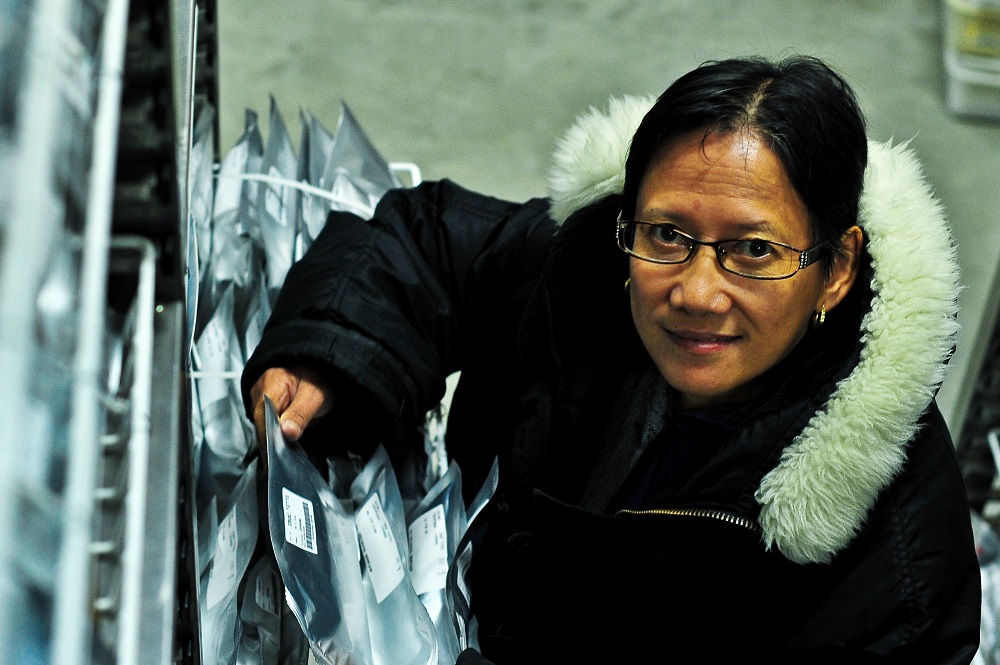 Behind every well-run genebank is an efficient taskmaster who fine-tunes its daily operations to ensure quality control in the service of the greater task of long-term conservation of genetic diversity. This role is fulfilled by Flora De Guzman, IRRI’s genebank manager, who was honored by Crop Trust during the ceremonial signing of the long-term grant at the 5th International Rice Congress in 2018.

Ms. De Guzman recently celebrated 40 years of service and is one of an elite group of IRRI staff to have worked with genebank founder Te-Tzu Chang (see the Legacy-of-T.T.-Chang).

“My first day on the job was May 2, 1978,” reminisces Ms. De Guzman. “Back then, IRRI only had medium-term storage; I was hired specifically for long-term storage.”

Efficient genebank accession rests on a complete and accurate inventory of its resources. Ms. De Guzman was responsible for the first complete inventory of the genebank, creating a database that matched physical accessions with morpho-agronomic descriptions and seed viability. She has since been instrumental in integrating Crop Trust’s genebank standards in the system and training staff—both internal and from other genebanks around the world—to uphold these rigorous protocols.

With a bachelor’s degree in agronomy and a masters degree in seed technology from the University of the Philippines Los Baños, she seemed right for the job. But it took her some time to warm up to working for an international organization. However, the end-goal of conserving rice varieties to help farmers gave her the impetus to stay on.

When she hears allegations that the genebank controls farmer access to rice genetic resources, she just shakes her head. “All these years working at the genebank, we have never denied a farmer’s request for seeds.” 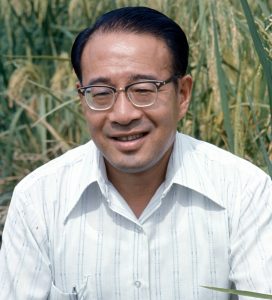 On 12 March 1988, Dr. T.T. Chang, IRRI’s first geneticist (and principal scientist at the time), and Peter Jennings, IRRI’s first rice breeder, shared the Rank Prize for Agronomy and Nutrition. In the early days after they were hired by IRRI’s first director general, Dr. Robert Chandler, they quickly assembled a large collection of rice varieties, including the short-statured cultivars from Taiwan. From this early assemblage of germplasm, Dr. Jennings made the crosses that ultimately resulted in IR8. However, exactly 19 years later on the same date, 12 March 2007, IRRI’s Genetic Resources Center was named the T.T. Chang Genetic Resources Center in his memory. He passed away, at age 78, the previous year on 24 March 2006. (Photo: IRRI)

She has a reputation for being strict but is equally known for being able to identify and troubleshoot issues across the entire long-term conservation process. She credits her past and present supervisors for her career growth: Dr. Chang for emphasizing the value of timeliness, Dr. Duncan Vaughn for encouraging her to step up in her tasks, Dr. Michael Jackson for clearly delineating her role, and Dr. Ruaraidh Sackville Hamilton, for empowering her to do her job to the best of her ability.

“It has been a very fulfilling career, and I am still looking for ways to improve the genebank,” Ms. De Guzman says.

She has two years to resolve remaining issues from their latest system upgrade and to establish a protocol that will eliminate the problem of misplaced accessions, but she is confident that all will be done in time.

“I am ready to retire because I have prepared the genebank for the future,” she says proudly.
_____________
Ms. Vega is a senior communication specialist at IRRI.