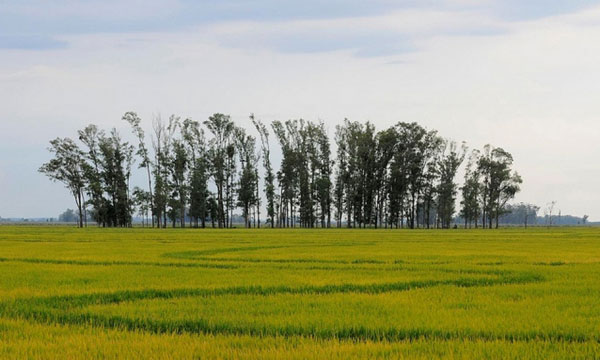 If you were asked to name some of the outstanding rice producers of the world, you might say China, India, or the United States.

You’d be forgiven for not thinking of Uruguay.

But, this small, temperate country on the east coast of South America’s “southern cone” is now firmly on the rice radar. From relative obscurity half a century ago, it now has the third-highest rice productivity in the world—an average of 8 tons per hectare of dry paddy rice in the last 5 years—thanks to a unique system that, in recent years, has triggered 25% gains in productivity.

Given the need to produce an estimated 116 million additional tons of rice by 2035 to meet the growing global demand, rice producers can learn from Uruguay’s rice revolution. With this in mind, Global Rice Science Partnership (GRiSP) representatives from around 20 countries spent a week in Uruguay to learn about its success in rice production.

Sacks of Uruguayan rice at the Saman rice mill near Treinta y Tres, are waiting to be shipped to markets abroad. (Photo: Neil Palmer)

In Uruguay, only 580 rice farmers are cultivating some 180,000 hectares of irrigated rice. Around 95% is exported, with key markets in Iran, Iraq, Brazil, and Peru.

The key features of the rice sector are vertical integration and transparency among farmers, millers, researchers, and the government.
This well-integrated structure means complete and up-to-date information on every rice export, well-defined rules on rice quality standards, active participation of farmers and millers in research goals, and the farmer-miller relationship duly signed in a production contract every year, which includes a private agreement on farmer rice price.

Organized through the Rice Farmers’ Association (ACA in Spanish), rice producers sell their rice directly to local mills, which process it for export.

The mills lend farmers up to 70% of the credit required for investments in machinery and other inputs, and coordinate a collective insurance scheme with farmers to protect them against crop losses due to hail damage.

The mills work closely with international traders and feed information to rice breeders at Uruguay’s National Agricultural Research Institution (INIA by its Spanish acronym) to ensure that breeding priorities are in line with market demand.

Farmers pay a tax of 0.4% of their annual income from rice production to fund future rice research at INIA. As co-founders of the Latin American Fund for Irrigated Rice (FLAR by its Spanish acronym) in 1995, INIA and ACA have helped to ensure that rice producers in Uruguay are able to get the most advanced technologies as soon as they are delivered by international centers.

Three locally released varieties cover more than 90% of the rice grown in the country. One of these, El Paso 144—an indica variety introduced in the 1980s—accounts for two-thirds of the area planted. It was selected from a population developed by Peter Jennings during his time in the rice program of the International Center for Tropical Agriculture (CIAT). The other two are INIA Olimar (indica 20%) and INIA Tacuarí (tropical japonica 15%).

Uruguay has no publicly funded extension system, so the mills or private consultants provide the farmers with agronomists to advise on the use of fertilizer, herbicide, and pesticide, as well as to supply clean, certified rice seed and to help to guarantee the best possible harvest.

The rice crop itself is rotated with pastures, usually in a 5-year cycle with two seasons of rice and three of pastures.

Based on a calendar of precise sowing times, the rice is “direct-seeded” using minimum tillage and no-till planters. This planting system allows seeding in October, which ensures high solar radiation at flowering and reduces the risk of cold damage at the reproductive stage. The pastures—normally a mix of grasses and legumes—are direct-seeded by plane immediately after the rice harvest. Roughly half of the water for irrigation comes from reservoirs that are specially constructed to collect the country’s abundant rainwater.

Although the costs of production are high in Uruguay—around US$1,800 per hectare—so are the quality and quantity of rice produced—1.3 million tons per year.

Mercifully free of middlemen, Uruguay’s integrated approach to rice production helps reduce uncertainty for all involved, providing a stability that allows the system as a whole to thrive.

Rice is branded “Uruguayan,” fostering a sense of solidarity across the sector in the face of fierce regional competition from neighboring Brazil and Argentina, as well as the United States and Thailand, among others in the international market.

“Uruguay is a unique case of a rice agribusiness sector based on exports that can sustain itself in the international market without any subsidy or government protection,” explained Gonzalo Zorrilla, FLAR executive officer. “This integration of the rice chain has been the driving force for the impressive competitiveness achieved in the past four decades.”

A lesson for the rest of the world?

Can we pick a lesson or two from Uruguay’s rice production and apply it to the paddy fields in Asia where 120 million rice farmers have an average area of 0.5−2 hectares and a very limited access to inputs? For Bas Bouman, who is shortly to take up the position of director of GRiSP, the answer is a resounding yes.

“I think elements of the Uruguayan system really could work in parts of the Mekong Delta,” he explained. “In Vietnam’s An Giang Province, for example, the government has a vision to develop a high-quality rice sector to supply niche markets. Here, I could definitely see one or more large mills joining together with large groups of farmers to produce high-value rice in a system based on trust and transparency.

“While most of the rice in Asia is consumed by the very poor, there is a rapidly growing middle class buying high-quality branded rice from supermarkets. Introducing something like the Uruguayan system at a smaller, local level could help them take advantage of this.”

For Dr. Bouman, there are also larger-scale opportunities.

“It’s possible that rice production in Myanmar could benefit from the experience of Uruguay. I consider it a ‘virgin territory’ because the existing system is relatively undeveloped and comes with no ‘baggage.’ Up until World War II, Myanmar was a major rice exporter in the region— the environment is perfect for rice production in many parts of the country. If it continues to open up, it could be a great opportunity to introduce a Uruguayan-style rice system from scratch.”

Although Uruguay’s rice system is indeed unique with its strong focus on integration and agronomy, its success could make it something of a game-changer for rice research, thus helping to benefit the rice world beyond its borders.

Photos and story by Neil Palmer.