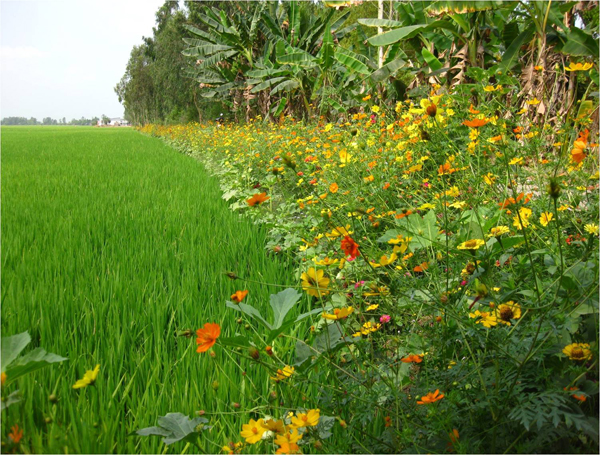 For years, the entomologists at Vietnam’s Southern Regional Plant Protection Center in Long Dinh had tried to sell rice farmers on the benefits of reducing pesticide use—to little effect. So, in 2001, they took a different tack: they challenged 950 farmers to try for themselves.

In one plot, the farmers grew rice using their usual amounts of seed and fertilizer, spraying insecticide whenever they thought it was needed—which was often. In a nearby plot, they didn’t spray at all for 40 days after planting and used less seed and fertilizer as well. To the farmers’ surprise, the yield from the experimental fields was as good or better, while costs were lower, generating 8–10% more net income. From then on, they were convinced, recalls Ho Van Chien, who collaborated on the project.

The exercise, designed with colleagues at the International Rice Research Institute (IRRI) in Los Baños, Philippines, was the first step in a campaign that Dr. Chien says has led Mekong Delta farmers to cut insecticide spraying from five times per crop cycle to once—or even none at all. Experts are now trying to replicate that success throughout Southeast Asia.

Thanks to misunderstandings about pest control and heavy marketing, Asia’s pesticide use has skyrocketed in recent decades. Pesticide imports by 11 Southeast Asian countries grew nearly sevenfold in value between 1990 and 2010, according to Food and Agriculture Organization (FAO) statistics, with disastrous results. Overuse indiscriminately kills beneficial as well as harmful insects, and decimates bird and amphibian populations. Pesticides are also suspected of harming human health and are a common means for rural Asians to commit suicide.

Ironically, the main target of this chemical warfare, the brown planthopper (Nilaparvata lugens), has become increasingly resistant to it. Over the past 5 years, planthopper outbreaks have devastated rice harvests throughout Asia—“but not in the Mekong Delta,” says K.L. Heong, an IRRI insect ecologist. Thanks to the more judicious use of chemicals, natural predators helped keep planthoppers in Vietnam in check (see Reducing pesticide use in Asia’s rice fields).

Clean as a swimming pool

The Green Revolution of the 1960s and ’70s introduced sturdier plants that could support heavier grain loads resulting from intensive fertilizer use. Rice production in Asia more than doubled. But, it left farmers believing more is better—whether it’s seed, fertilizer, or pesticides.

Rice farmers became accustomed to spraying soon after planting, when they first saw signs of the leaffolder, which appears early in the crop cycle. That bug causes only superficial damage that doesn’t reduce yield. Worse, early spraying also takes out the frogs, spiders, wasps, and dragonflies that prey on the brown planthopper, which arrives later and is far more dangerous. Instead of “landing in a sea of sharks,” planthoppers find something as “clean as a swimming pool,” Dr. Heong says. What’s more, tests have shown that killing planthoppers now takes pesticide doses 500 times greater than in the past. More and more planthoppers survive to suck sap from the young rice plants, causing them to wither.

As early as the 1980s, IRRI and the FAO convinced some Southeast Asian governments that, with integrated pest management (IPM), natural predators could control planthopppers. In 1986, Indonesia banned 57 pesticides and completely stopped subsidizing their use. But, progress was reversed in the 2000s, when growing production capacity, particularly in China, unleashed a “tsunami of pesticides,” says FAO entomologist Peter Kenmore. Even some in the agrochemical industry concur. “We all agree that, in Vietnam, farmers have overapplied pesticides in some production environments,” says Kee Fui Kon, who oversees rice-related R&D at the Swiss agrochemical giant Syngenta.

In Vietnam, the Mekong Delta trial helped change conventional wisdom among farmers and agricultural officials. The study led to the “three reductions, three gains” campaign, to convince farmers that cutting the use of seed, fertilizer, and pesticide would boost yield, quality, and income. Word was spread through posters, leaflets, TV commercials, and a serialized radio soap opera, broadcast in 2004, that featured a rice farmer who gradually became convinced of the benefits of IPM. It didn’t hurt that a 2006 planthopper outbreak hit farmers using insecticides harder than those who didn’t.

Recently, the Plant Protection Center and IRRI have also been encouraging farmers to grow flowers, okra, and beans on the banks of paddies, instead of stripping vegetation, as was typical. The plants attract bees and a tiny wasp that parasitizes planthopper eggs, while the vegetables diversify farm income. Dr. Chien says that few Mekong Delta farmers now routinely use insecticides, though many still use fungicides.

“I think that there are signs that things have gone pretty well in Vietnam recently,” Dr. Kenmore says. Other experts are reserving judgment. “I take the reports [of reduced insecticide use] at face value, but as a scientist I would like to see data,” says agroecologist Steve Wratten of Lincoln University in Canterbury, New Zealand. Geoff Gurr of Charles Sturt University, Orange, in Australia, who collaborates with Dr. Heong and Dr. Chien, says that they are now crunching data from studies on pesticide use and the effects of planting flowers and vegetables; a paper will be ready soon.

Syngenta’s Dr. Kon says that insecticides still have a role to play, especially those targeting other pests, such as stem borers and the larvae of several moth species that feed on rice plants. The company’s internal data show that yield gains of 21% can be achieved with proper use of pesticides, he says.

Other countries are taking note of Vietnam’s approach. In 2010 and 2011, massive planthopper outbreaks hit 400,000 hectares of Thai rice fields, causing losses of about US$64 million. “We’re starting to increase the awareness that farmers are losing a lot because of the misuse of pesticides,” says Kukiat Soitong, an extension specialist with the Thai Ministry of Agriculture and Cooperatives. The Thai government is now pushing the “no spray in the first 40 days” approach.

All of these initiatives, Dr. Heong says, “have to overcome very powerful marketing forces,” such as bundling pesticides in packages with seeds and fertilizer, offering incentives for volume purchases, and hyping the benefits. Here, too, Vietnam is taking action. A proposed law calls for licensing pesticide dealers and government approval of advertisements to prevent exaggerated claims. FAO pest management expert Kevin Gallagher thinks that such regulation is needed in the region. “Farmers everywhere are influenced by advertisements,” he says. There is “a lot of misinformation everywhere, all the time.”

Mr. Dennis Normille is a contributing correspondent for Science.