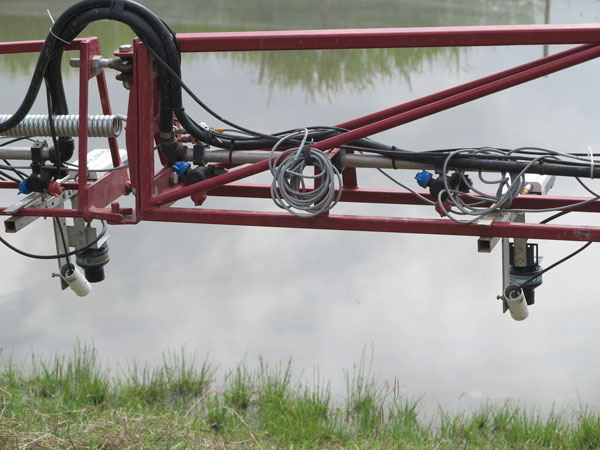 A GPS-guided field canopy sensor system mounted on a spray boom is used to measure some physical traits of rice plants. (Photo: IRRI)

Since the first type of rice was sequenced in 2004, more than 3,000 additional ones have been sequenced, that is, their gene sequences—all their genetic information—have been deciphered. This is a remarkable scientific feat, which is an important step in understanding genes to breed new varieties of rice with beneficial traits to improve global food security.

With this sequencing comes a huge amount of genetic data, but the real power of this information is unleashed only when each gene is mapped to a specific trait. Without this additional knowledge, it’s like having a phone directory full of numbers but no names attributed to them.

Thus, in 2011, the Global Rice Science Partnership (GRiSP), the CGIAR Research Program on Rice, initiated the Global Rice Phenotyping Network. This network brings together an international community of rice scientists in a joint effort to advance rice phenomics—the measurement of the physical and biochemical traits of a rice plant—and link these traits to genes.

Through phenomics, rice scientists can tell you which gene is responsible for what trait, and how many different versions of the gene are out there. The key is to measure just about anything that can be observed on huge and diverse populations of rice plants such as leaf size, number of panicles, or grain nutritional attributes. It is a numbers game that powers gene discovery through a sophisticated statistical procedure called association study.

Currently, the network focuses on important traits related to yield, efficient use of water and nutrients, and responses to major environmental stresses.

The availability of genomic sequence information and the traits it stands for has propelled breeding into the “molecular age.” Scientists now use molecular genetic information to quickly and precisely combine and select useful genes, as opposed to the trial-and-error process of conventional breeding. However, to enable molecular breeding, large libraries of genes must be established in the form of molecular markers. These are probes that help track the incorporation of specific genes into new varieties. This is not to be confused with the technology on genetically modified organisms—no modified genes are used or introduced. The Global Rice Phenotyping Network aims to contribute to massive gene discovery, with each partner bringing in its own research expertise and facilities.

Importantly, for the field work, since partners are located in different parts of the world, the crop can be tested under different environmental conditions. This means that the performance of rice plants—and the effectiveness of the genes that control this performance—can be measured in different climates, soils, and cultural practices. Some genes may have beneficial effects in one environment but not in another whereas others may improve growth and yield stability. Pooled observations across the network thus provide a handle on the interaction of the plant’s genetic makeup and its environment.

The resulting database will teem with information such as how a plant looks, how it grows, how well it withstands extreme temperatures, or how nutritious its grains are. Most of all, researchers can assess whether or not the expression of a given trait is stable, that is, whether the gene does exactly the same thing regardless of the environment.

“The task is so enormous that no institute alone can do it,” explains Michael Dingkuhn, crop physiologist for the Center for International Cooperation in Agricultural Research for Development (Cirad) based at the International Rice Research Institute (IRRI) and coordinator of the Global Rice Phenotyping Network. “This requires many different technical setups and environments, and the willingness of partners to jointly invest in a common goal.”

For Dr. Dingkuhn, the keyword is sharing. “We all have agreed to work on the same types of rice—300 types of indica rice and 300 types of tropical japonica rice.

“All contribute what they can do best in terms of traits, experimental design, and analytics. We search for characteristics and associated genes that deliver higher yield potential and improved abiotic stress adaptations, notably those related to climate change.”

Hubs across the planet

The network’s activities need to be closely associated with breeding. Sites in Colombia, Brazil, the Philippines, and Senegal, for example, serve as phenotyping hubs where rice seed can be easily imported and tested for many traits, in direct association with a major rice breeding program. The field hubs also represent different types of climate. For example, to check the effect of temperature on grain filling, the network has hubs in the Philippines, India, Senegal, and China.

In addition, two upland hubs are set up in Colombia and Brazil and a rainfed lowland hub in Benin for traits contributing to yield under drought conditions. Scientists are examining salt tolerance traits in Senegal and at IRRI.

All network partners will share access to the data and analyses. Eventually, when results are published, the database will be public.

“Previously, each center analyzed its own data,” says Dr. Edgar Torres, plant breeder at the International Center for Tropical Agriculture (CIAT), who is leading the work on yield potential in Cali, Colombia. “The process in exploring the relations among traits, stresses, and varieties was tedious because many trials had to be established.

“But now, we have developed laboratory information management systems to integrate all the data on physical traits, which are shared with molecular biologists to make breeding more efficient.”

The process of taking the measurements and recording them is tedious, labor intensive, and time consuming. And, since these are done by humans, they are prone to error.

“The greatest challenge is quality control,” says Dr. Dingkuhn. “Experiments in many locations worldwide, with thousands of plots, are prone to errors from wrong labeling and data recording to the management of the crop itself. The data pass through many hands, thus multiplying the potential error.”

In 2013, IRRI scientists conducted initial trials using automated, nonintrusive robots to take field measurements of the rice plants to reduce human error and labor costs. “Although it is too early to conclude whether the setup will be successful, the potential is great,” says Dr. Dingkuhn.

Since this endeavor involves huge amounts of data, IRRI and Cirad scientists are working together to streamline the process of data analysis and make it more transparent.

“This is going to be a gold mine of data!” Dr. Dingkuhn says. “Eventually, we want to get to the point where a breeder can directly combine and select for specific genes, knowing exactly what they do in different environments and how effective they are in different combinations.”

Core partners of the Global Rice Phenotyping Network are the Africa Rice Center, CIAT in Colombia, and Cirad in France. But, many other research centers are involved, such as the French Research Institute for Development (IRD), Brazilian Agricultural Research Corporation (EMBRAPA), Chinese Academy of Agricultural Sciences, Philippine Rice Research Institute, India through local IRRI teams, Commonwealth Scientific and Industrial Research Organisation and Flinders University in Australia, Cornell University and Colorado State University in the U.S., and, from the private sector, Syngenta.

Ms. Ebron is a public relations officer at IRRI.