The journey of Srimati Gouri Rani Shankar is nothing less than an inspiration for women in general and women in agriculture in particular. She has set an example for successful women-led community-level enterprises in an agrarian economy. 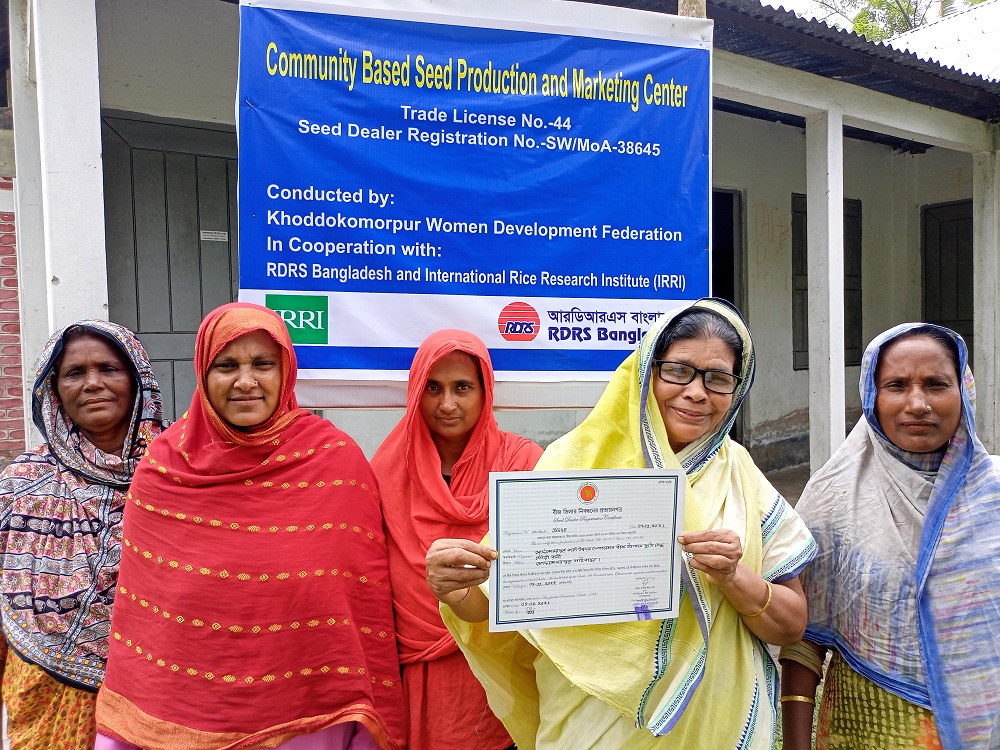 .
The journey of Srimati Gouri Rani Shankar is nothing less than an inspiration for women in general and women in agriculture in particular. She has set an example for successful women-led community-level enterprises in an agrarian economy. Today, Gouri Rani is 58 years old and is the president of the executive committee of the Khoddokomorpur Women Union Federation in the Gaibandha District of Northern Bangladesh (Rangpur Division).

A journey driven by passion
Her journey, which began in 2010, was ridden by obstacles. However, her indomitable and determined spirit coupled with the people and organizations willing to support her changed Gouri Rani’s life as well as those associated with her.

Gouri Rani is a native of Haridas, a village in Gaibandha. She has been a member of the Rangpur Dinajpur Rural Service (RDRS),  a non-government organization in Bangladesh, since 2009. RDRS started with funding from the European Union, European Civil Protection and Humanitarian Aid Operations Department (DG EAC) in 1972. It provides opportunities for underprivileged families and community-based organizations to fight poverty..

Gouri Rani had a passion for community development work and was good at mobilizing people and resources, and was thus a perfect fit for RDRS. Life hurled several challenges at her. She lost her husband in 2010. Her husband was a carpenter and didn’t leave her much. She had to sell 0.04 hectares (ha) of the 0.12 ha of land she owned to help her daughter secure work as a school teacher.

Signatures on the ground
As a member of the Women Union Federation in Gaibandha run by RDRS, Gouri Rani worked with other widows, divorcees, and the destitute. The women in this group were barely literate. They practiced writing their signatures on the soil while working on roadside tree plantations.  These women also faced the resentment of some rich people around them who did not take the prosperity of poor women positively. They even attempted to discourage the women’s group from working for RDRS.

But the women forged a strong bond within the group and, together, proved to be a force for making change a reality.

To be eligible to join the federation and receive the benefits, the women had to make a small initial deposit of USD 0.12, and own at least 0.2 ha of land and a rickshaw van puller.

As members, they received training on rice seed production, homestead gardening, poultry, livestock rearing, and others which would help ensure their food and economic security. Aspiring entrepreneurs in the group were offered financial assistance of up to USD 295 by RDRS. The profit-sharing ratio was 7:3 between the women entrepreneur and the federation. With time, the federation’s membership and financial strength kept improving.

In 2010, the Women Federation in Gaibandha received USD 14, 300 in funding from the DG EAC to construct their own office. Their office now stands on land generously donated by Mr.Prince Choudhury. From 432 members in 2010, the federation’s membership increased to 1,010 by 2015. Gouri Rani was elected as its president in 2011.

Funded by the Bill & Melinda Gates Foundation, AGGRi aims to unify and modernize existing rice breeding efforts in South Asia and Sub-Saharan Africa. The USD 30 million five-year research program will sustainably provide new and improved rice varieties to farmers. In particular, it will focus on the needs of women in the rice value chain.

IRRI selected 100 members from the federation and organized them into five groups of 20 members each. The groups were assisted in procuring seed licenses under the IRRI-RDRS community-based seed production program. IRRI-RDRS provided all necessary support for seed production including technical advice, seed, fertilizer, pesticide, seed processing instruments, and packaging materials The groups are now linked to different stakeholders such as the seed certification agency, agri-entrepreneurs, and seed dealers.

The members sowed different rice varieties and assessed the performances through head-to-head adaptive trials. Exposure visits allowed the women to witness the results in other locations. Convinced with the performance of the rice varieties, the members are now actively promoting them to other farmers and through their network.

The participating members sold 2,600 kg of rice seeds to the federation for a total of  USD 1,482 and the remaining amount to seed dealers.

The money the groups earn from selling the seed is used to recover the costs and meet their routine expenses. The surplus is deposited in banks. These savings are also used to provide federation members with loans.

Harnessing grassroots power
Gouri Rani is optimistic about the federation’s rice seed production enterprise. She expects better rice production in the community. She remains humble about her contribution and credits the members who put a good amount of their time and energy into such activities. Although the members that participated in the training revealed that time management is sometimes a concern for them because of the extra time, labor, and vigilance required for quality seed production, they are strongly dedicated to their goals and dreams. Their success is also highly dependent on group dynamics.

Grassroots associations such as the one headed by Gouri Rani can be instrumental in achieving broader goals of sustainability and addressing food and nutritional security, economic independence, and gender empowerment.