In mid-July this year, we visited Bhuan, a small farming community of nearly 50 households in the Indian state of Odisha, to spend a day with Gagan Bihari Pradhan and his family. The village is located 40 kilometers southeast of the state capital, Bhubaneswar, near the bank of the Dhanua River. The day we were visiting, the river looked like a small canal—less than 5 meters wide, but we were told by the villagers that the width of the river swells to more than 5 kilometers in the rainy season and that the entire village, including rice fields, is inundated by the river. 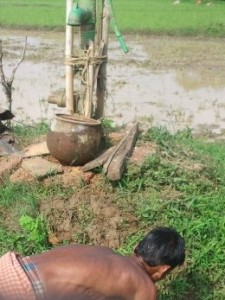 Gagan has been involved in farming since he dropped out of middle school nearly 30 years ago. Currently, he has less than 1 hectare of farmland in two small separate patches in different parts of the village and he farms another patch on a shared-crop basis. After the rice harvest, he grows green gram, black gram, potato, and pointed gourd on parts of his land in summer. Recently, he has begun raising mushrooms for more income. He has a small backyard garden behind his house in which he grows vegetables for his own consumption. He has one cow, two young calves, and a bullock.

Apart from his farm operation, he works as a daily laborer for half of the year. During the rice-growing season, he works for 90 days in other farmers’ fields in the village apart from working in his own. Off-season, he works in Bhubaneswar or nearby towns for 90 days and the remaining 90 days are spent on the farm, growing various summer crops. His wife takes over farming operations in the early summer when Gagan works in Bhubaneswar or nearby towns. In addition, she is involved in threshing and storing paddy. Our rough calculation suggests that his total gross annual income last year from selling surplus farm produce (paddy, mushroom, milk, black gram, green gram, potato, and point gourd) and his on- and off-farm wages was close to Rs. 60,000 (approximately USD 1,100).

When we visited, Gagan’s day started at 6 a.m. By that time, his wife had already finished collecting fresh cow dung from their cowshed. After having tea and puffed rice, he took his cattle out for feeding and finished a few additional activities around the house. Then, he started carrying farm manure in a basket on top of his head to his field, which is nearly 200 meters from his house. He made 10 trips in nearly 2 hours, carrying a total of 200 kilograms of manure. Meanwhile, his wife prepared breakfast for the family and helped their two younger daughters get ready for school (the second daughter is in high school and the youngest in primary school). The eldest daughter, who was recently married in a nearby village, was also there on her annual vacation.

When Gagan returned home from the field at 9 a.m., his wife served him a big bowl of rice, fried potatoes, and onions. Then, Gagan headed back to his field where rice seedlings were already visible after broadcasting the seed. He started cleaning bunds around his field and did some weeding until 12:30 pm. We watched him for a while, but, the heat and high humidity forced us to find some relief from the scorching sun under the shade of a nearby tree. After a couple of hours, other farmers working nearby, including Gagan, joined us to take a break from the unbearable heat.

During our conversation, one thing was very clear: these farmers are frustrated with their stagnant lifestyle. They believe the world around them is changing rapidly. They are very determined to educate their kids so that they can get out of farming and live a better life. After talking with them, we headed back to Gagan’s house. On the way, Gagan stopped to take care of his mushroom crop; then, upon reaching home, he bathed in the nearby river.

While sitting on the veranda of his house, we asked the eldest daughter, who was providing us with good company, if she was married to a farmer. She replied “no,” explaining that, although her husband belongs to a farm family, he works for a private company in Bhubaneswar. She also remarked that nothing has changed—her father’s plight has not improved at all over the last 20 years, despite putting in 12 hours of hard labor every day, 365 days a year.

During this time, Gagan had left on his bicycle and returned in 10 minutes looking quite frustrated. His daughter said he wanted to give us fresh coconut water and he was looking for someone who could climb the coconut tree. Somehow, he managed to get a few young coconuts with the help of a long bamboo branch and he served us some refreshing coconut water. It was inspirational to see his hospitality despite knowing that he would not be gaining anything from these strangers who were intruding into his family life.

After lunch Gagan normally takes a 1-hour nap, so we decided to go to a rice mill on the outskirts of the village to eat our lunch and we returned an hour later. After his nap, our host headed to his patch of land on the other side of the village. He showed us with beaming pride his new tube-well irrigation system and he was hoping that we could somehow help him get his 50% subsidy (Rs. 35,000/ USD625) from the government. He has been waiting for that subsidy for several months. We politely explained that we have no connection with the government to help him with this. Apparently, his irrigated patch has been plowed only a few times, so he was waiting to transplant, hoping for some rain so he could avoid the irrigation water pumping cost. He worked there for 3 hours until 6 p.m., fixing the ground around the irrigation system so that the water would flow evenly to all parts of his field.

At 6 p.m., before we returned to Bhubaneswar we inquired about his activities for the rest of the evening. He replied that he will feed his cattle and will do other work around the house. Then, he will go to the village market around 7 p.m. to get some groceries and other items. His day will end after playing cards with friends, calling it a day between 10 and 11 p.m.

We left with heavy hearts, thinking that Gagan and millions like him are caught in the poverty trap with no escape. But, we were also overwhelmed by his hospitality and amazed how content he appears to be with his life. Despite all his problems and uncertainties, he seems to be living life to the fullest. He may not realize it, but his hard work and that of millions more small farmers just like him keep food prices affordable and help feed 1.2 billion Indians.